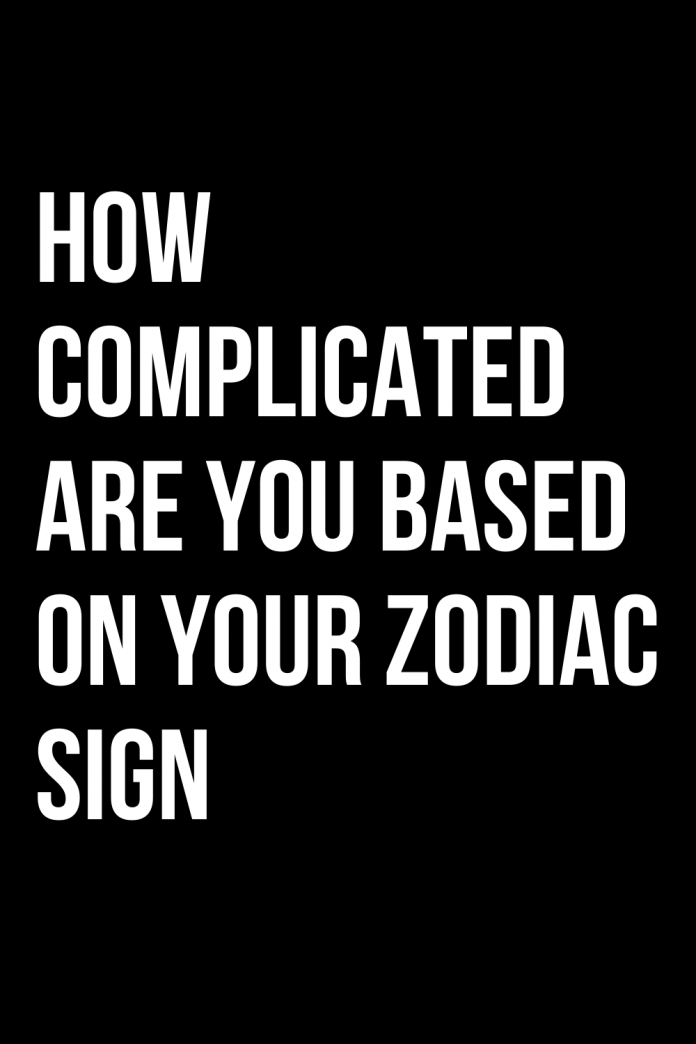 Horoscope: find out if and how complicated you are based on your zodiac sign.

It is a well-known fact that people are complicated. Of course, there are those that are easier to “read” and those that are so incomprehensible that you lose even the desire to try to understand them. In any case, we rarely realize which group we belong to and this is because in our eyes everything about us is simply ordinary. In reality, however, in our own way each of us has more complex aspects than others. Aspects that in large part can be determined by the influence that the stars have on us.
Today, therefore, after having seen how each sign lives as single and which are the most nostalgic zodiac signs , we will try to understand how complicated we are based on our zodiac sign .

Here’s how complicated you are according to the stars

Aries – Not too complicated
Straightforward as few, you’re not that complicated. The important thing is to be able to understand how you think and what exactly you expect from others. Details that you often do not hesitate to disclose both in words and in deeds. And after all, from an always active person like you it is easy to expect such an attitude. Wasting time is not really part of your character and by explaining immediately what you expect from others or from life itself, it puts you in a position of advantage. Perhaps all of this transparency tends to fade a bit when feelings come into play. In this case you end up being less “legible”, always leaving a sense of uncertainty about your moving figures. While this aspect makes you interesting at times, on the other it can confuse and intimidate those who love you and find themselves uncertain about what your feelings are.

Taurus – Not complicated at all
As a person who loves simple things, your way of carrying is the same. Being complicated is therefore not your thing. This is the case at work, in friendships and even in love, where you prefer to be as sincere as possible in order to have a relationship that is peaceful and free of misunderstandings. Of course, sometimes you too have your moments of closure, in which it is difficult to enter and communicate. Moments that you mostly reserve for people with whom you are no longer on good terms (at least on your part) or who do not fall within the circle of your affections. A sort of defense that you put in place whenever you fear you could be hurt and that at times risks precluding you from relationships that could instead give you a lot. A greater balance in this regard, therefore, would certainly help in making your relationships stronger.

Gemini – Quite complex
Your complexity comes mostly from your being dual and constantly conflicting with two ways of being often conflicting. In fact, even when you think you have been framed, you manage to surprise with sudden changes of mood or with novelties capable of upsetting plans and situations. A way of being that for others can be pleasant or acceptable if seen as a form of unpredictability but which often tends to tire people who instead would like more stability on your part. For you, however, being able to guarantee such a thing is downright impossible. So it’s better to stay yourself and try to surround yourself with people who understand and accept you as you are. After all, everyone has their “dark” sides and yours probably lies in being unpredictable.

Cancer – Complicated
Your being a complicated person is average and mostly depends on your mood which tends to change hour after hour. Although you are a person who presents itself as quiet and pleasant when you have your “five minutes”, things change considerably, making you incomprehensible and often intractable at times. The problem is that you at first tend not to foresee these moments that you even struggle to manage being a victim of them in your own way. A solution? Try to work on self-control and make an effort to be more empathetic with others. Admitting that you have this weakness and learning to apologize after a moment of yours would make it more bearable by making you look complicated but almost interesting.

Leo – Not very complicated
Your life is based on more than obvious necessity, which makes you somewhat predictable. In fact, you are very easy to read and once known it is easy to imagine how you could act in certain situations. This makes you a person at times simple and reassuring in your own way. Which remains even when you have your moments of whimsy that are balanced by a tendency to always act in a standard way that over time is easy to get to know. If one of your desires is not to amaze, then, you can consider yourself more than satisfied with how you are.

Virgo – Complex based on situations
Basically you are a rather simple and easy person to “read”, too bad that when something upsets you you tend to completely change your character, becoming your exact opposite and putting those who have to do with you in crisis. It is a way of being that you don’t fully control and that takes over when you feel threatened by someone or something. In similar situations, in fact, it becomes completely impossible to understand and with needs that few would be able to guess. A way of being that often tends to upset those around you and that you should strive to improve, perhaps learning to better contain and manage your emotions without freaking out if you are dealing with others.

Libra – Simple in your complexity
The way you are makes you appear much simpler than you really are. This depends on the way you set up your life which, based on the harmony of simple things, appears relaxing to the eyes of the beholder, giving you an image of a person who is always calm, serene and able to find a solution to every problem. If on the one hand these things correspond to the truth, on the other hand it is only a facade behind which there is a deeper and sometimes difficult to understand you. This aspect, however, is often reserved only for a few close friends who, for better or for worse, have the opportunity to know even that part of you less radiant and positive and that at times tends to darken, giving voice to their weaknesses. Situations that, after all,

Scorpio – Extremely complicated
Of all the signs you are certainly the most complicated. No one will ever be able to say that they really know you because you are the first to keep discovering yourself day by day. The beauty of you, after all, lies in your mysterious and fascinating aura. The same one that tends to enchant others who, when they know you, feel the need to go deeper and learn more about both what you think and how you live. Too bad that in addition to being really complicated you are also often reluctant to talk about yourself and to open up, especially if there is no consolidated relationship of trust at the base. In short, having to do with you is always and in any case an experience that can be positive or negative but that certainly will not leave indifferent those who meet you on their path.

Sagittarius – Not That Complicated
While you like the idea of ​​looking complicated, in reality you are next to nothing. Those who know you can read you and predict your actions well in advance, even when you try to hide them or make them more mysterious. Your being practical and direct, in fact, makes you an extremely spontaneous person who can hardly keep things to himself. This, on the other hand, also makes you very simple and this despite not being something that, it seems, you like. Too bad, because others tend to like people who are easy to understand.

Capricorn – Almost always uncomplicated
Normally you are a simple person that others think they can understand in no time. Every so often, however, your thoughts become difficult and when they become overwhelming they lead you to act in an incomprehensible way, leading you to suddenly be out of the box. It is a situation that does not happen often but that when it arises can even complicate your life, creating basic misunderstandings with those around you. Learning to explain yourself better and not to hide the thoughts behind your sudden changes of mood and idea, would certainly simplify everything.

Aquarius – Tendentially complicated
In theory, you are a rather simple person, with basic needs that are easy to understand. What makes you complicated is the way you choose to put them into practice, often behaving in an incomprehensible way. Add to this the fact that you don’t tend to care much about what other people think, resulting in you appearing more complex than you actually are. Communicating more could solve the problem at source. The truth, however, is that you don’t really care much about how you look since you basically live well even if others perceive you differently than you are. And the important thing, after all, is to live peacefully despite everything, right?

Pisces – Gently complicated
For others you are undoubtedly a difficult person to understand. However, this is part of your soul as an artist and in some way it is also a particular component that gives you a certain charm. Often with your head in the air and immersed in a world made of dreams, you find it hard to keep your feet on the ground and this way of being is perceived in your every action. For this reason, at times, you risk not being taken as seriously as you would like. Fortunately, this only happens when you are dealing with superficial people since those who know you well know perfectly well how deep you know how to be and, consequently, complicated. An aspect that is part of you in a positive way and that therefore you should live with more lightness, without worrying about appearing different from how you are.