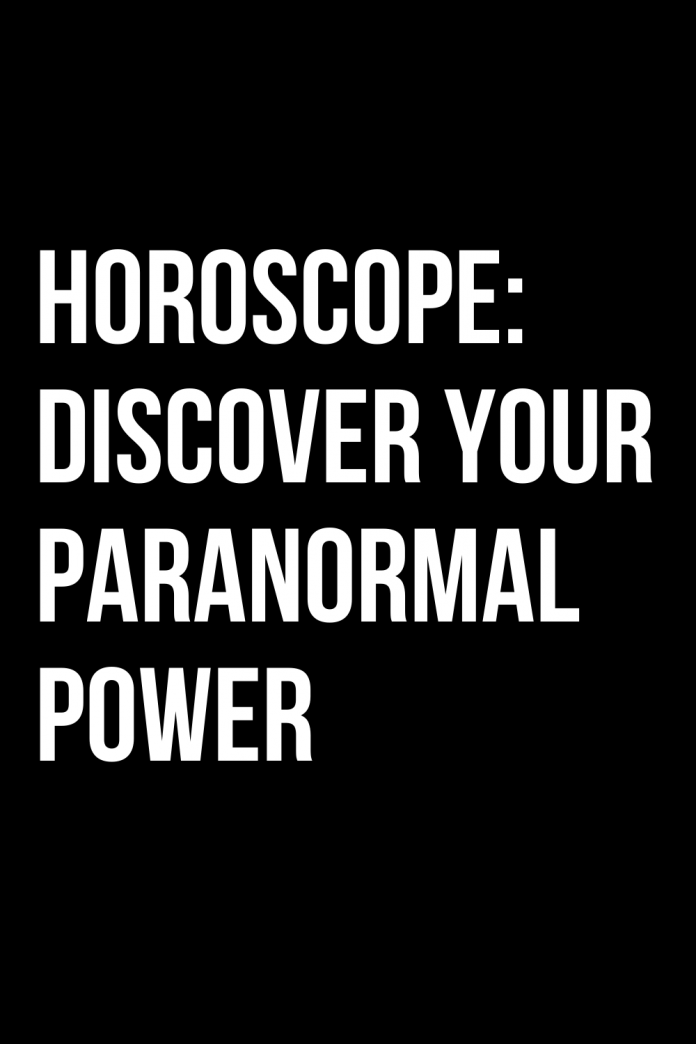 Discover the paranormal power for which you are best suited according to the stars.

Have you ever thought about what your superpower might be if you were the character of a novel or a movie? It is a question that sooner or later everyone has asked themselves, either out of curiosity or out of a simple desire to imagine themselves in the role of a heroine or at the center of a different story than usual. What not everyone knows is that we are all more or less inclined towards a particular attitude and that this, in large part, depends on the influence that the stars have on us. So today, after seeing what is the phrase that defines us best and what is our greatest hidden quality, we will try to play a little, trying to find out what might be a suitable superpower for us. if we ever find ourselves in the eternal struggle between good and evil, just like in the movies.

Find out what your paranormal power might be, according to the stars

Aries – That of making things explode
Always impulsive and unable to stay still, you pour your way of being into everything. For this reason, even the paranormal power would not be very far from this way of acting, making you able to blow things up. Obviously it would be one of those powers to be learned slowly, which you do not excel at and which, consequently, would lead you to combine great disasters, managing mostly to make objects tremble or throw them away. Do not worry, however, in every good story there is always someone who has the purpose of teaching how to manage their powers and in your case, once you have learned to manage your impetuosity, your power would also begin to function correctly.

Taurus – Preserving Important Notions
In a magical world, you would be the one who holds the knowledge or who carefully preserves the great books containing the knowledge. Your wisdom and the calm that you imprint in everything you do, make you the best person to take on the role of the character to turn to for advice and who every time has the right words to help others fulfill their destiny. . An important and not at all marginal role that would allow you to know every aspect of the people around you, while giving you a certain credibility capable of making you one of the most esteemed and admired characters.

Gemini – Reading into the memory of objects
Yours would be a difficult power to control and one that you would probably be the first not to believe. Your often dual character would lead you to be even fickle. Still, your power would be very important and would relate to the ability to read objects’ memory. In practice, it would be enough for you to hold something in your hands and concentrate deeply to discover its past and understand what happened to it or to whom it belonged. An important power that would make you the center of attention of private investigators and, of course, of other people with psychic powers.

Cancer – Shapeshifting
In an alternate world, you would be able to shapeshift as you please, showing yourself in a different aspect each time. Your power, however, would be made unstable by your emotionality, putting both you and the feats you face at risk. For this reason, it would take you a long time to work on yourself and your ability to control yourself. Once you have learned, however, you would discover your true essence precisely in the possibility of changing whenever you want, reinventing yourself and learning to be, gradually, the best version of you.

Leo – Fighting enemies
Little akin to paranormal powers, even in a magical world you would most likely end up not having any. However, you would be an excellent warrior, one who after so much skepticism, would learn to believe in what she sees, making friends with wizards and sorcerers from whom to receive what it takes to move forward in history, obviously winning every battle. Because whether it’s in the real world or in fantasy realities, your desire for success is always an integral part of your way of being.

Virgo – Discover the origin of the mysteries
You too, like those born under the sign of Leo, are not very used to the paranormal. Your thirst for precision, however, makes you a perfect scholar, perhaps a little nutty but always able to reach the solution through often inexplicable paths. Who knows, maybe even in your way of thinking there is a pinch of magic. But better not let others know. After all, that of the slightly crazy character is a figure that has always fascinated you.

Libra – Boosting your energy
Your super power would be to always be able to have an extra dose of energy, drawing it from the environment around you. This would allow you to always be on top and to show yourself cured and lucid enough to be able to study strategies even in the middle of the night or after a grueling fight. This is a power that would make you very sought after by others who would turn to you when they need someone to lean on to face enemies. One thing that all in all sounds familiar to you, right?

Scorpio – That of divination and vision
Your strong instinct, able to make you intuit many aspects of the future, makes you the ideal candidate for a power linked to foresight. In a magical world you would surely be a natural witch with the ability to predict the future and grasp the past from a few, and for you simple, clues. A power that would be part of your person that would accompany you for better or for worse, making you the protagonist of some good book or one of the main characters and, undoubtedly, more mysterious.

Sagittarius – That of understanding symbology
Your paranormal power in a magical world? An innate ability to understand symbols unexplained to the rest of the world and the ability to open seals. A power that also joins your vocation to travel and to always have new experiences, which leads you to often be alongside sorcerers and people who have to do with magic or who have to explore unknown worlds and need a guide able to help them cross paths hitherto unexplored.

Capricorn – Having enlightening insights
If you really had a power, yours would be that of the scholar who is able to perceive solutions otherwise impossible to understand and all with the help of concentration alone. Scope for meditation, you would always be ready to abstract yourself from everything to turn the gears of your mind that together with your intuition would allow you to find the solution to any enigma. Not a real power but the fruit of many years of study for which you would always show yourself grateful, aware that commitment always pays off.

Aquarius – That of collecting magical tools
Even in your case we cannot speak of a true power but of a sort of destiny that makes you the most suitable person and sometimes the only one capable of possessing magical objects of immeasurable power. Your knowing how to estrange yourself from the world and the indifference you nurture towards the social interactions of others place you in the right position to act as keeper of objects that one day could be used by someone whom you will always have the task of choosing. Yours, therefore, although it is not a purely central role is still important and indispensable for the growth of the characters and the development of the story.

Pisces – The Power to Understand and Heal Others
Your greatest power is empathy. In an alternative world, therefore, you would be the healer able to perceive the malaise of others and to put an end to it with a simple gesture or with special rituals. Your presence would therefore be of great importance, not only for sorcerers but for the animals of the forest and for all those who are in the position of having to heal body or soul. You would most likely be a priestess or sorceress who can magically heal anyone who crosses your path.