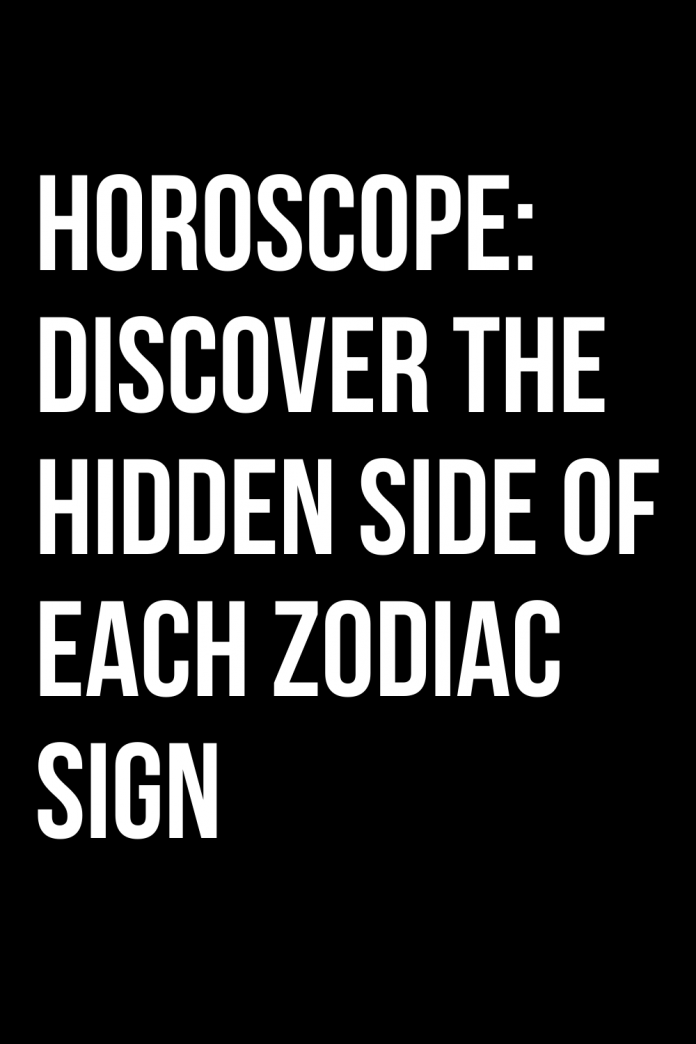 Find out what each zodiac sign is like and what is the hidden side of its personality.

Each person looks different than he is in reality. Although it is well known that basing on appearances is wrong, too often the first impression is the one that remains in mind and that ends up delineating who we are in front of. Each of us, however, although appearing in a way, hides a very different side which is often difficult to discover. These are those aspects that sometimes we try to hide to protect ourselves or that we hope not to point out to avoid being judged. In any case, it is always good to try to understand who you are in front of and today, after having seen what the month of December will be like for each of us and what is the ideal first date for each zodiac sign, we will find out together the hidden side of each sign. To this, to have an even more precise picture, it is possible to combine the control of the ascendant, to be able to know more deeply who we are in front of.

Here is the hidden side of all the zodiac signs

Aries – Romanticism
Yes, behind the mask of frivolous and aggressive people, those born under the sign of Aries hide a romantic soul. Often they try to hide it even from themselves because it is considered a weak point. When they are with the right people and who they think they can trust, however, their true nature slowly comes out, showing even the sweetest and most appreciable sides. Of course, this does not mean that what is perceived on the surface is wrong. Aggressiveness and desire for revenge are part of their character. It is important to remember, however, that there is also something else underneath.

Taurus – Perseverance
Taurus natives are often seen as lazy and unable to truly commit to anything. The truth is that by nature they do not like to throw themselves into battles that do not interest them, preferring other aspects of life such as good food, love, and everything that can please them. When they care about something, however, they can engage with all the energy they have, showing tenacity and perseverance equal to few. Never think of them that they are people who are not willing to fight then. If engaged in the right battle, they can give anyone a hard time. They just have to want it.

Gemini – Reliability
Often we are led to believe that Gemini is a fickle, fickle, and capricious people. In reality, these sides of their characters, even if true, are very superficial. It is enough to dig a little deeper to discover that beneath a skin that is difficult to understand, there are concrete and above all reliable people. Having them as friends is a source of guarantee because when they are involved they know how to give their best, offering all the necessary support and support and always showing themselves to be present and constant, a quality that is often difficult to find in other signs of the zodiac.

Cancer – Fragility
Those born under the sign of Cancer are known to be very moody, hardened romantics, and very touchy. Although these characteristics are part of their sign, inside they hide a fragility that would be hard to believe and that they often tend to hide with an aggressive attitude. The truth is that they are too afraid of being injured and never recovering and, for this reason, they carefully evaluate the people they can trust, offering them continuous pitfalls to test them. Even if it is really difficult to be next to them, when you manage to overcome their protection shield, you can find people who are reliable and ready to offer their hearts unconditionally. As long as they think they can trust them.

Leo – Loyalty
The natives of Leo are difficult people to understand and approach. On the surface and even a little deeper, they are very self-absorbed people and always looking for a way to excel over others. If you enter into their graces, however, they will hardly make great distinctions between themselves and loved ones, giving them all the loyalty they have and trying to make them happy in a thousand different ways. Of course, getting into their circle of affections is difficult. When you do, however, it’s a bit like winning a prize because believing a lot in yourself, when they love someone they take it for granted that they are a valid person, just like them.

Virgo – The ability to lead
It is often thought that the leading sign of the zodiac is Leo. Those who do, however, have never known those born under the sign of the Virgin. Behind their hard and impenetrable rind and the continuous judging and criticizing of others there is an innate predisposition to command. Rationale and with a good practical sense, they can manage any situation, evaluating every aspect, both positive and negative. Relying on them is therefore always a good choice, as long as they intend to share their opinion, of course.

Libra – The Critical Sense
Libra natives are often perceived as people interested only in what is beautiful and who, as a result, can be very superficial and impractical. Although they love to surround themselves with what they like, they also possess a good critical sense that leads them to judge themselves and their surroundings with extreme clarity. This involves a constant need to improve and the ability to give the right advice to those who want to know their opinion. They also have a good dose of wisdom that makes them excellent advisors.

Scorpio – Sensitivity
Those born under the sign of Scorpio have a reputation that is difficult to erase. Known to all as strong and selfish people, they hide an extraordinary sensitivity that makes them righteous and extremely altruistic people. The truth is that they are often disillusioned with past disappointments and their fear of suffering leads them to shut down and show only the harder side they have. Those who want to know them thoroughly, however, will be able to understand what they carry in their hearts and discover how having them on their side is a source of inestimable wealth.

Sagittarius – The ability to analyze
The natives of Sagittarius show themselves to everyone as always cheerful people. This sometimes makes them appear as superficial beings and hardly able to feel deep emotions. Even if their party soul is real, they are also able to have an insight into things. Their ability to analyze is such as to allows them to get very concrete ideas about what surrounds them. Of course, many times, these ideas are contaminated by their prejudices but even from this point of view they can turn out to be much more prone to self-criticism than you think, accepting their mistakes to improve themselves.

Capricorn – Positivity
Capricorns are often known as extremely serious and thoughtful people. Inside themselves, in reality, they hide a much more playful part that they tend to show only in private and to the people they trust. Among other things, the natives of this sign are also very positive and able to analyze things with underlying tranquility that allows them to have a vision that is often more real than that of others. Listening to their advice, even if it is sometimes a little too positive and lacking a certain basis of concreteness, can therefore be very useful. It is enough to know how to skim the mixed parts to their being utopian people and you will have something in your hands to think about thoroughly.

Aquarius – Intelligence
Those born under the sign of Aquarius are often very intelligent people. Their being often closed makes them less inclined to make themselves known as they are, thus giving the impression of being unsocial and very tough people. The truth is that these are people with complex personalities that should be studied thoroughly before being able to make a judgment. What is certain is that behind the appearance there are concrete people with a great sense of reality that can sometimes be uncomfortable but that if taken with the right manners can teach a lot.

Pisces – The acumen
Pisces are known to everyone as romantic and able to dream like no other. This then makes them appear as abstract and somewhat naïve characters. In reality, however, they are people with great acumen and an out-of-the-ordinary lucidity that allows them, thanks also to a marked sensitivity of the mind, to fully understand both people and the situations in which they find themselves. Listening to them, therefore, is often more useful than you think, especially if at the base you can grasp what they say between the lines and which is often the real focus of the speech.