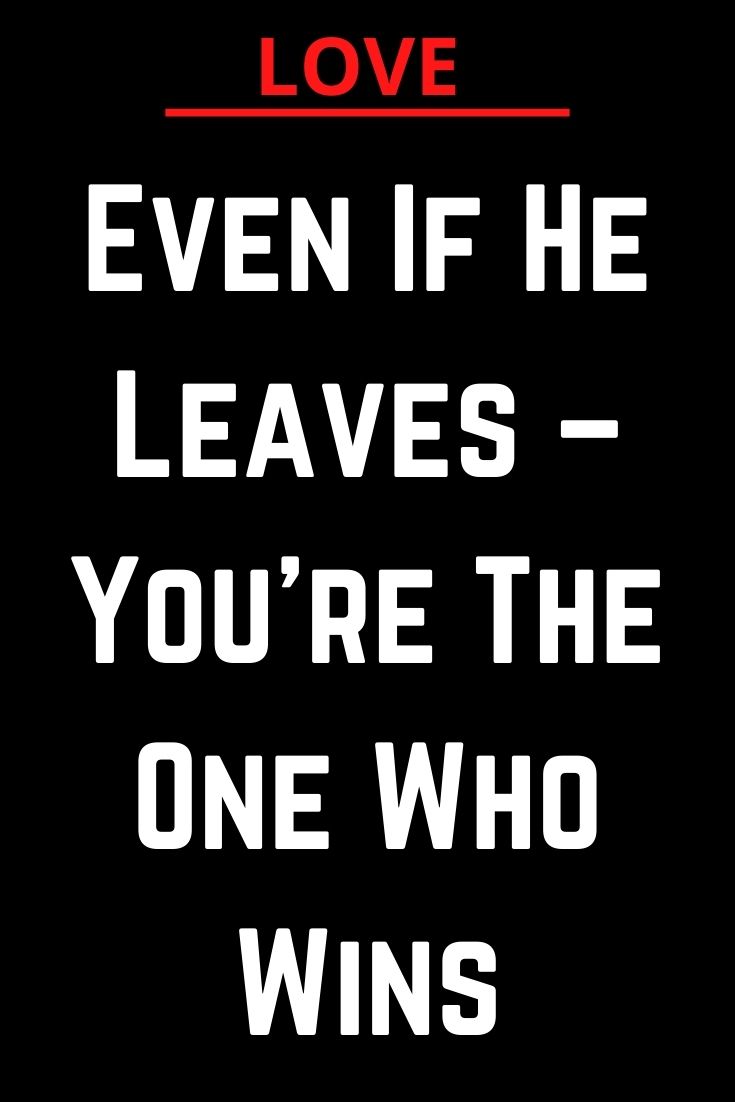 No matter how much in pain you are right now, believe me – you’ve won. I know it sounds crazy, but the moment he decides to leave you, he loses, and you’re the one who wins.

You’re the one who wins because you were not afraid to love him with all of your heart.

You were real and genuine in this world full of fake minds and prejudice. You showed everyone how to love unselfishly, and you made the world a better place.

Don’t even dare to think otherwise. Your tears, big heart and soul full of life are all traits of a real soldier.

You knew that you might get hurt, but your beautifully stubborn heart simply didn’t want to give up at the first obstacle. Obstacles have made you stronger.

Even though he took you for granted, you were giving.

Even though his selfish nature took you for granted , your big heart was giving. You weren’t afraid to give the most valuable thing in your possession – your heart, to a complete stranger.

Can you ever imagine what a brave person you are? I’m really proud of you, and you should be, too.

You were giving even though you barely received anything in return.

You always hoped that something will change, and you were generous to give him a second chance.

Even though he didn’t appreciate you, you gave him your affection and were patiently waiting for him to reciprocate.

Even though he lied to you, you were honest.

It takes a brave person to stay honest in the sea of lies. You knew that he was lying to you, but you decided to stay genuine.

Even though his lies have haunted you every night in your sleep, you didn’t let them change who you are. You stayed true to yourself.

You never missed a chance to tell him how much you love him or miss him even though he refused to answer your calls. You were honest.

Honesty is a very expensive gift that you were giving wholeheartedly, and you expected it from him as well, even though you knew you cannot expect such an expensive gift from cheap people.

But, you chose to believe differently because you always try to see the best in others.

Even though he made you feel unworthy, you gave everything you could.

You didn’t care for his manipulative games that made you feel unworthy of love. He made you feel like you had to fight and deserve his love, and you gave everything you could.

You were fighting like a real soldier not because he forced you, but because you believed if you give everything you have, he will eventually change his mind and start treating you the way you deserve.

Giving everything you have has made you vulnerable, but you were still proudly swimming in the sea of his lies not giving a damn.

You believed he would rescue you once you started drowning. He didn’t.

And you weren’t afraid to continue fighting for his poisonous love even though you knew it would destroy you.

Even though he picked someone else, you chose him.

You chose him, and you decided to fight for him. You should be proud of yourself because you did everything that was in your power to win his heart.

And that’s what brave people do. They don’t like someone and then wait for them to magically appear on their doors and jump into their lives.

Brave people choose to fight for someone they like, even if they know that they could end up getting hurt. You are not afraid of challenges.

You don’t let life challenge you; instead you’re the one challenging it, and sooner or later, you will reap what you sow.

Your efforts will be rewarded one way or another, you just have to believe it.

Even though he left, you’re the one who won.

You know you did your best, and you gave him a chance even though he took it for granted.

Know that you’re the one who won because your heart has gone through enormous pain and now it’s even stronger.

His heart will stay the same, even though you tried to repair it. But your big heart will be even bigger and stronger, and it will patiently wait for someone who deserves you.

You’re the one who wins because you know how to love, and don’t let anyone tell you differently.