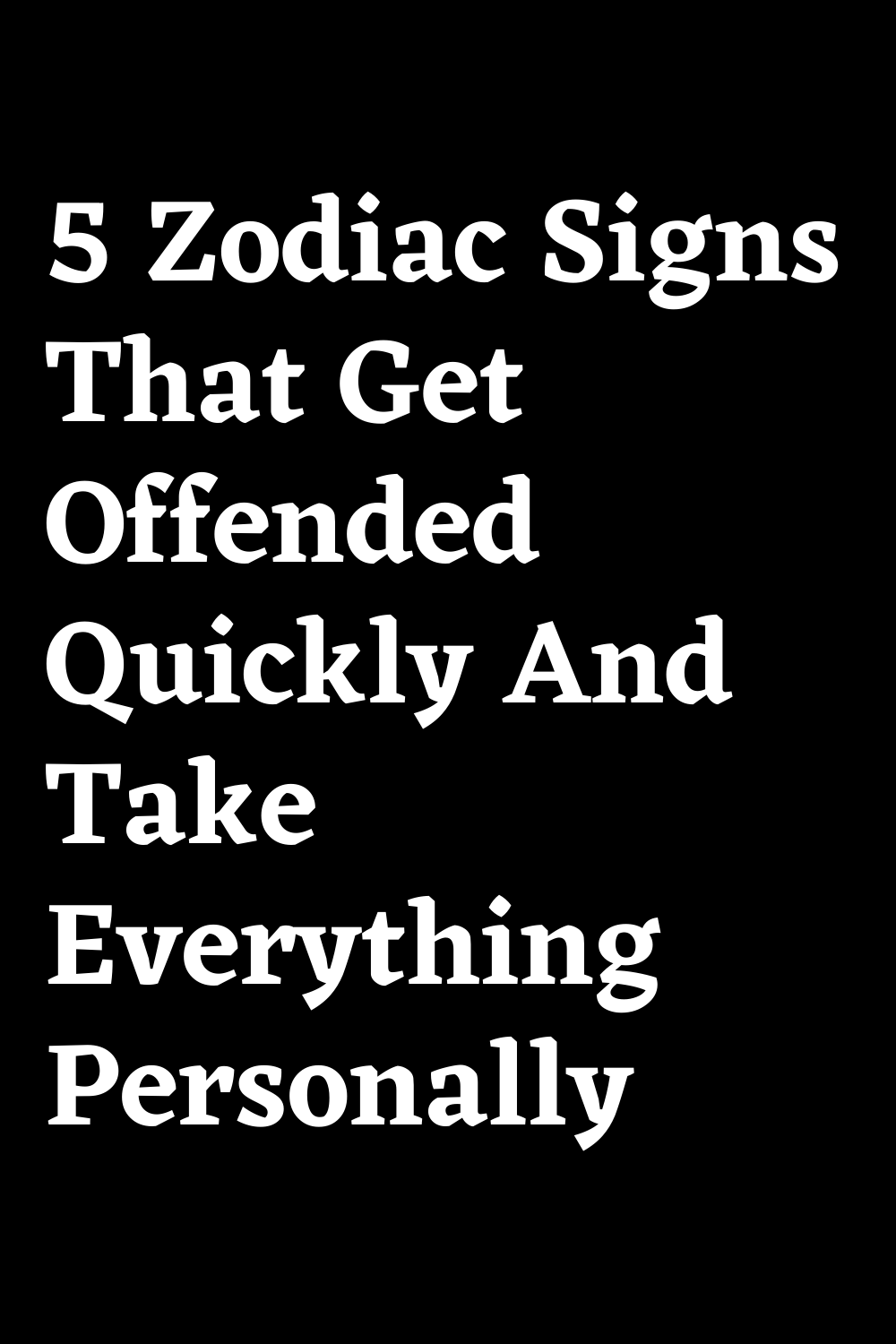 5 Zodiac Signs That Get Offended Quickly And Take Everything Personally

With these zodiac signs, you have to be careful what you say.   It can be stressful being around someone who is easily offended. You don’t want to say anything that offends them, and it feels like walking on eggshells. As hard as you try, you always say something that offends them without meaning to.

What are the zodiac signs in astrology that are easily offended? Sometimes they have a very strong reaction and you just want to get out of the firing line of their anger and hide somewhere. Then there are times when they appear to be passive-aggressive. They are silent, go away or ignore others and sometimes you don’t really know why. In fact, sometimes you don’t really realize that they’ve decided not only to stop talking to you, but to cut you out of their lives.

There are many reasons why someone can be easily offended: they may need a lot of attention, cannot deal with their feelings, are oversensitive, have no power, or want to be in control of people have around you. Always being offended often has little to do with real feelings and it is usually more about being manipulative.

People who are easily offended are exhausting. It’s difficult to be authentic in their surroundings because you don’t want to hurt them. Therefore, as a partner, it is often easier to be as calm and boring as possible in order to avoid an emotional breakdown.

Pisces are also one of the most sensitive signs of the zodiac. They are nice, intuitive, and loving, but because they tend to be insecure, it is easy to get offended. Pisces usually need a lot of appreciation, and if they don’t get it, they’ll get upset over a harmless thing someone said or did.

Pisces are resourceful and can find a thousand reasons why people do or say things. Thus, a fish can quickly twist the facts and turn the words around in your mouth. He understands your intention the way he wants to understand it and he often assumes the worst. When this happens, you need to reassure a fish that they are loved and that there are so many things about them that you admire. Otherwise, he will feel useless and offended.

Capricorns work very hard and if they don’t get the recognition they think they deserve, it will offend them. Although Capricorns tend to have a great sense of humor, it is sometimes lost. When this happens, they think that others are making fun of them or talking badly of them behind their backs. That offends them deeply. Capricorns often take things very personally. Even if someone didn’t mean to offend them, they will think they did it on purpose. In this case, a Capricorn can be extremely dramatic and unable to get around for a long period of time because their pride has been hurt so badly.

Virgos can be extremely critical of other people and themselves. They definitely have an inner voice that is always telling them how imperfect and wrong they are and can therefore be offended by the slightest thing someone else does or says. They are almost waiting for someone to say something and make them angry. Virgos are very concerned about not being able to keep up with others around them or failing. So you could say something that you don’t mean as criticism, but a Virgo will take it that way anyway. She will take it personally and blame you for her bad feelings.

Scorpios don’t understand why everyone can’t see how awesome they are. They think that if humans don’t see this, they must be seeing something wrong in Scorpio. And that’s the worst for Scorpio. Scorpios have a lot of strong emotions, but they tend to internalize them and don’t like to carry them out and share them with others. So when they are offended by something petty or harmless, they may react with a passive attitude. And sometimes it can be that they hold that little thing against you for your entire life. When a Scorpio is in defensive mode, you don’t always know exactly what offended him. And sometimes in the end he doesn’t even know exactly anymore.

Cancer is sensitive and it is difficult to predict what will and will not offend it. You could tell him something one day that he takes as a compliment and tell him the same thing the next day and he would be completely offended. You never know what will upset a cancer. You may think you’re just teasing him in a friendly way, but he may be interpreting it as some kind of criticism of his character. The problem is, cancer is not a sign that will look over things and just put them away and move on.

No, Cancers will think about it for a long time and get upset again and again. Sometimes it doesn’t make sense why they are offended in the first place, but you have to respect it if you want to live with them. Otherwise the phase of being offended will never end. An apology can sometimes be anything you want to hear in those moments that could placate you.