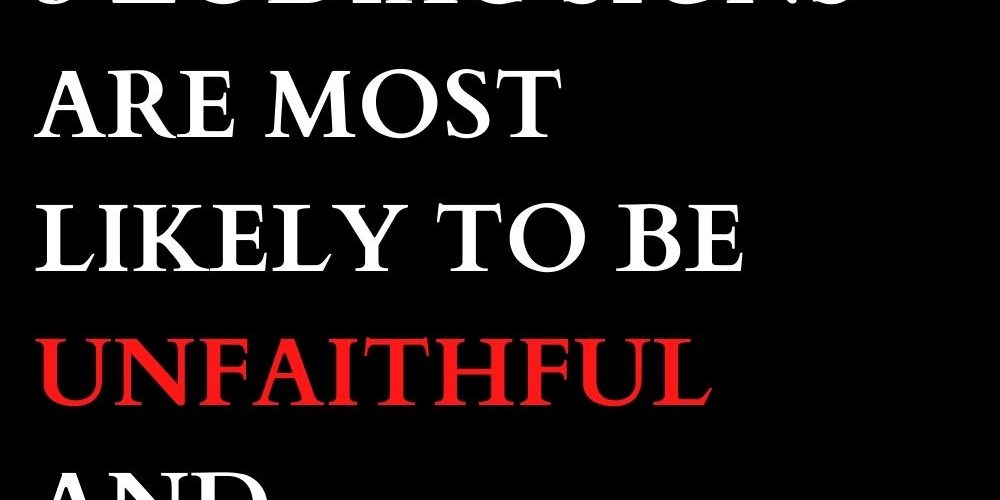 As much as a lot of us wouldn’t want to admit it, cheating happens way more often than we would typically want it to. And it’s always really difficult to identify a cheater at the start of a relationship. You would never want to willingly allow yourself to enter a relationship with someone who is only going to end up cheating on you. That’s just asking for a lot of pain, heartache, and disappointment.

Fortunately, astrology is available to offer you some help and guidance when it comes to sniffing out potential cheaters. According to the advice of the experts, there are indeed certain Zodiac signs that would be more likely to cheat in a relationship compared to others. And these Zodiac signs would go really far in trying to hide their infidelity and unfaithfulness.

“We all have our needs in a relationship, but for a fair share of people, faithfulness is their highest priority,” says astrologer Cindy McKean. “Since we can’t help who we fall in love with, sometimes we fall in love with people that are prone to being unfaithful.”

In the Zodiac, there is something that is referred to as a modality. And in the case of astrology, there are three different modalities that categorize all of the Zodiac signs. There are the cardinal signs who like to take initiative: Aries, Libra, Cancer, and Capricorn. There are the fixed signs who always like to maintain status quo: Taurus, Leo, Scorpio, and Aquarius. And then there are the mutable signs which have a reputation for being flexible and adaptable: Gemini, Virgo, Sagittarius, and Pisces.

The fixed Zodiac signs are the ones who are most likely to stay faithful because of their reluctance to change and impulsivity. “These are signs that generally do not like change. One of their main roles in their existence is stability,” says McKean. “That’s not to say that all of them will only be faithful — we’re all subject to the complex nature of being human — but there’s a much higher chance of fixed signs being faithful than other signs.”

And even though there are some Zodiac signs out there who show a better likelihood to remain faithful as compared to others, not every other Zodiac sign is going to automatically become unfaithful in a relationship. It’s very important to note that there are no certainties here, there are only likelihoods and chances. But that’s what love is always about. It’s a chance that you should be willing to take with another person. You are never really assured of anything with a person. But you can always choose to put your faith in someone who you know is unlikely to betray you.

That’s why it’s really good to use the Zodiac signs as some kind of reference or guide for you to gauge potential romantic partners. So, without much further ado, here are the Zodiac signs that are likely to cheat and then lie about it.

Ultimately, there is a high chance that an Aries would cheat only because they are very impulsive in nature. They are the kinds of people who wouldn’t really think much about what they’re doing before they do it. They just act on impulse a lot of the time. And that isn’t always a good thing when you’re in a committed relationship with someone. Have a look at one of the most read articles on how to love an Aries.

Geminis are the people who get bored way too easily. That’s what can lead them to become unfaithful. They might seem like they’re really great to be with at first and that they have a lot of fun with you. But later on, someone else is going to grab a hold of their attention and they wouldn’t be afraid to just abandon you.

A Libra is a very social creature. They are as amiable and as charming as can be and that’s partly why you were so drawn to them in the first place. But the problem with having such a likable partner is that they’re constantly going to be surrounded by different people. And when there are people, there is a temptation.

Scorpios are very sensual and passionate lovers. When they get into a relationship with you, there will really be no shortage of passion and romantic intensity. However, whenever they feel like you aren’t giving them enough passion in return, then that’s when they will start to look elsewhere for stimulation and satisfaction. If you’re planning on dating a Scorpio then you should know the  15 Brutally Honest things about Scorpios.

Pisces people are drama whores. They are constantly looking for an engaging narrative or story to be a part of. Whenever they feel like their relationships are getting a little too boring, then they start to dabble in infidelity just because they want to shake things up a little bit.