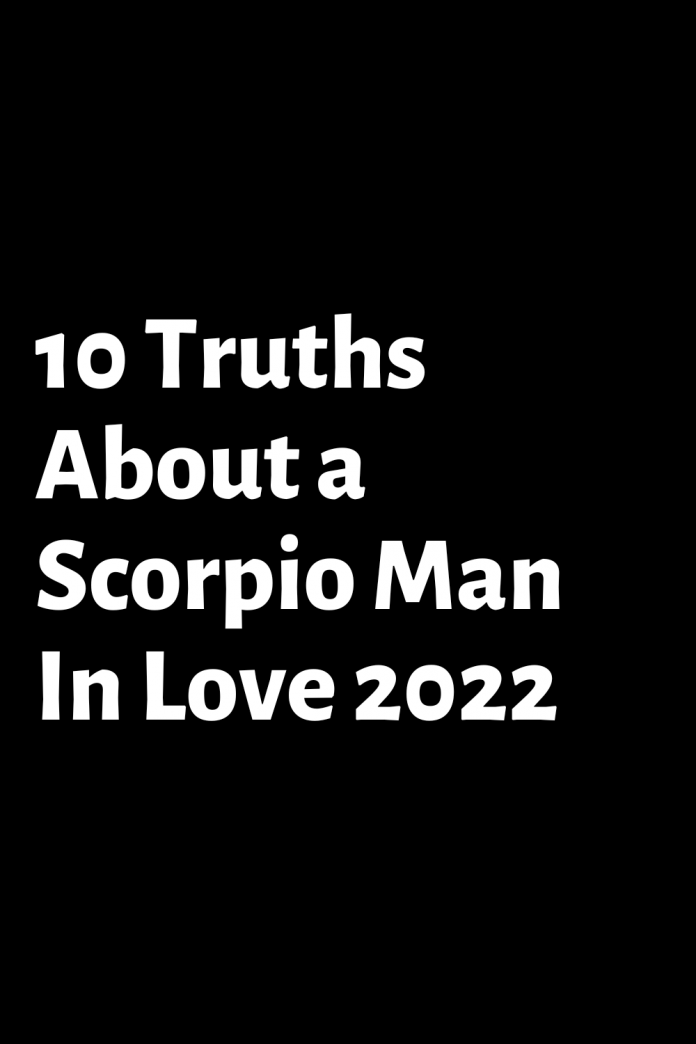 If you have been in a romantic relationship with a Scorpio man, you should have learned a couple of things about him so far.

But if you just met a Scorpio man and you don’t know anything about his behavior in romantic relationships, there are a couple of things that you can learn from this article.

So, let’s talk about a Scorpio man in love and reveal some of the most important truths about him, shall we?

He will be jealous

Scorpio man is known to be someone who is very passionate, so he can’t actually control his feelings.

If he sees that your coworker was hugging you longer than it should be or that a random guy in the street smiled at you, he will immediately react.

He doesn’t like when other guys hit on his partner, so you can expect many dramas when you are engaged in a love relationship with him. If you love him, you can try to talk with him about this kind of behavior.

You can explain to him that you love only him and that you are not interested in other men. That should calm him down a bit.

He will try to control you

This behavior is linked to the previous one—when he is in love he will try to protect his partner from everyone and everything and for a moment, you will feel like he controls you.

He just can’t take the feeling that you will betray him with someone else.

He refuses to think that he isn’t the only man in your life and even if you say that it is over, he will go the extra mile to prove you wrong.

He is definitely someone who never gives up on things and people he loves, so you can expect the unexpected from him.

He will want to be the dominant one

These men like to be in charge all the time, so you can expect him being dominant and assertive all the time.

It means that he likes when his partner is a person who never makes important decisions because he doesn’t trust anyone but himself. Just like he is dominant in work, he is the same in the bedroom.

He likes to be the dominant one and if you try to make him the submissive one, it will be a huge turn-off to him.

I am not saying that you can’t initiate s_-, but you should let him do the rest.

He will sometimes be emotionally distant

Since the planet Pluto partially rules this sign, he will sometimes be cold and distant. But he doesn’t do that intentionally. It is just a part of his persona.

But once he gets obsessed with something, you won’t be able to do anything about it because he will be into it all the time and you can feel a little bit neglected.

The best way is to talk with him about your feelings and calmly tell him that you would like to be the person he will get obsessed over as well.

He will have a good memory

A Scorpio man is known as someone who has an extremely good memory.

That is a good thing for him because he will remember every fight and all your sentences very well ,and he can use them against you.

The bad thing about that is that he often gets fixated to some things that matter to him and he won’t be willing to give up on them so easily.

He will have a need to take care of you

When you are in a love relationship with a Scorpio man, you should know that he will do anything that has to be done just to protect you.

When he loves, he loves to the bone and there is no more important thing to him than seeing his partner happy and satisfied.

This can sometimes be tricky because by trying to protect you, he will unintentionally control you.

He will think that he is doing that for your own sake but the truth is that he will just suffocate you.

He will always be direct

No matter what topic you two are talking about, he will be brutally direct and honest with you.

He won’t feel bad because you don’t have the same opinion as him and he will stick to his own even if you get mad.

If he is in love with you, he will honestly tell you what irritated him and what kind of things he loves on the other hand.

He doesn’t like playing mind games, but he will always have his heart on his sleeve, so you know what he feels in every moment.

A Scorpio man in love will demand full monogamy and commitment but he will not always behave like that.

Once he establishes a deep and healthy emotional relationship with you, you can be sure that he is only yours, but he will flirt from time to time. They all do that just to boost their egos and to feel better.

He knows that you are a high-value woman and he would never betray you or do you any harm. There are some lines he never crosses.

But he will be loyal

A Scorpio man knows that flirting is something almost all people do and by not crossing the line that you shouldn’t cross, it actually can’t harm anybody.

I know that no woman likes to see her man flirting, but as far as you are engaged in a love relationship with a Scorpio, you shouldn’t worry that he will cheat on you.

When he truly loves someone, he would never do any harm to that person.

He knows that he wouldn’t like something like that happen to him, so he won’t do anything about it.

He will love you just the way you are

If you want to have a best friend and a lover all in one, a Scorpio man is the right choice for you.

He will adore every part of your body, including those that you are trying to hide from him.

If you put on some extra kilos, he won’t mind it because he fell in love with your personality and not in your body.

On the other hand, if he sees that you are suffering emotionally because of the things that happen around you, he will be your best support and a person you can rely on.