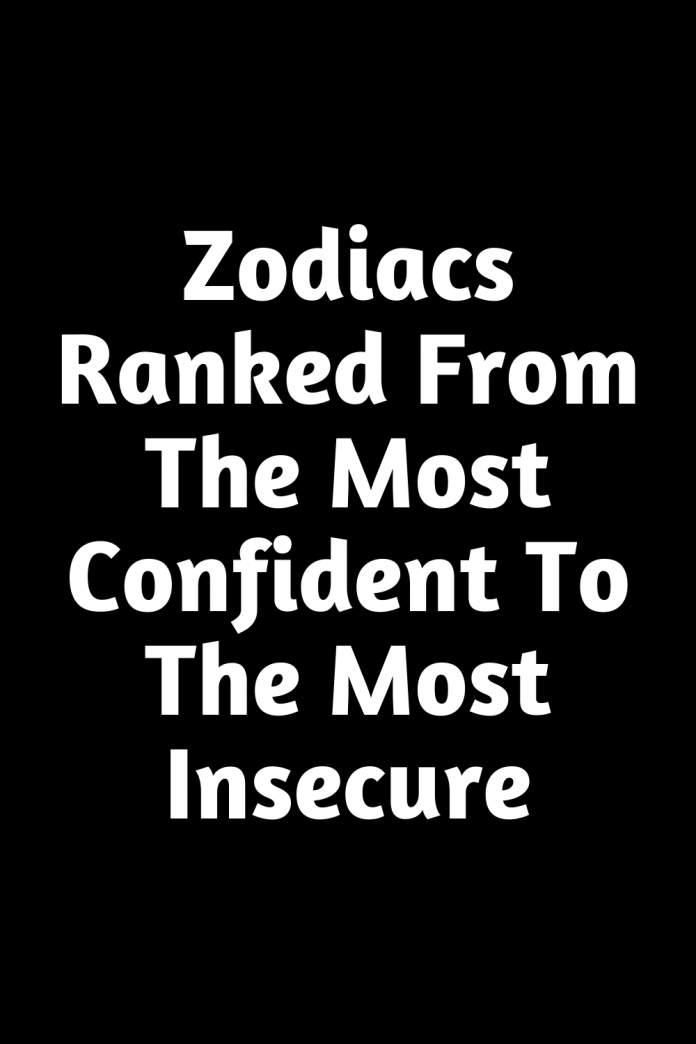 Leos are the embodiment of confidence. They think that they are never wrong. That their way is the right way. If anyone talks down to them or disrespects them, they walk. They know what they deserve. They don’t settle for anything less than the best when it comes to their friendships, their relationships, their career, their clothing — you name it.

Scorpios realize they have some flaws, but for the most part, they like the way they look. They like their personality. They like the life that they have created. They aren’t bothered by the person they see when they look in the mirror. They are happy with who they are, and even though they have a few bad habits, they don’t think they’re horrible enough to bother changing them.

This sign is confident enough to take criticism and learn from it instead of moping over it. And if someone straight out insults them, they think that it says more about that person than it does about themselves. They never let the haters keep them up at night. The only time they even think about those assholes is when they’re laughing about how stupid they are with friends.

Pisces are perfectly fine around people. They can get up in front of a crowd to give a wedding toast and make new friends at a dinner party. But they have moments of insecurity when they’re alone. When they’re staring into a mirror, picking at their appearance. When it’s late at night and their thoughts are running wild. When they’re all alone, that’s when they start feeling self-conscious.

To an outsider, this sign looks like nothing could ever hurt them. Like they have skin made of steel. But the truth is, Aries are actually pretty sensitive. They just don’t let anyone see them cry. When they’re upset, they overcompensate with jokes and sarcasm. They don’t want to be seen as weak, so they act like they don’t give a f_-k about anyone or anything — which is a big fat lie.

All a Taurus wants to do is prove that they are intelligent, because that matters more to them than looks do. They try to appear smarter than they are by using big words and pretending they know more about certain topics than they actually do. They might even try to one-up you or impress you by stretching the truth. They just want to prove themselves. To show the world that they’re on their way to success.

Libras need approval from others in order to feel okay with themselves. They will fish for compliments by tearing themselves down and waiting for their friends to tell them that they’re beautiful. And they will go on dating sites, even when they don’t feel like getting dinner, just to see if anyone is interested. They want reassurance that there are people out there who are attracted to them.

Gemini mold themselves to fit the people around them, because they want to impress their friends and bosses and crushes. They want everyone to like them. So if they lie about liking someone’s band tee or hating pineapple on pizza, it’s not because they are inherently dishonest. It’s because they are too insecure to be their true selves.

Most Cancers have been told that they care too much. And because of that, they can get emotional over little things. When a friend cancels plans at the last second. When the person they’re dating raises their voice during an argument. When a cat refuses to go anywhere near them. They take things personally. They get hurt easily

An Aquarius works hard to make it look like their life is easy. They take perfect pictures. Post perfect captions. Create the perfect Instagram feed. They use their online presence in order to show off their glamorous life — which in reality, isn’t the greatest. They aren’t happy with what they already have, so they overcompensate by trying to make it look better than it is. It’s their best way to get a confidence boost.

Virgos are terrified of looking stupid by saying the wrong thing — which is why they hate public speeches and first dates and really, any human interaction. They get embarrassed easily, because they are overthinkers. Even when a night went well, they replay the memory again and again in their head until they find something they did wrong. And in their mind, they’re always doing something wrong.