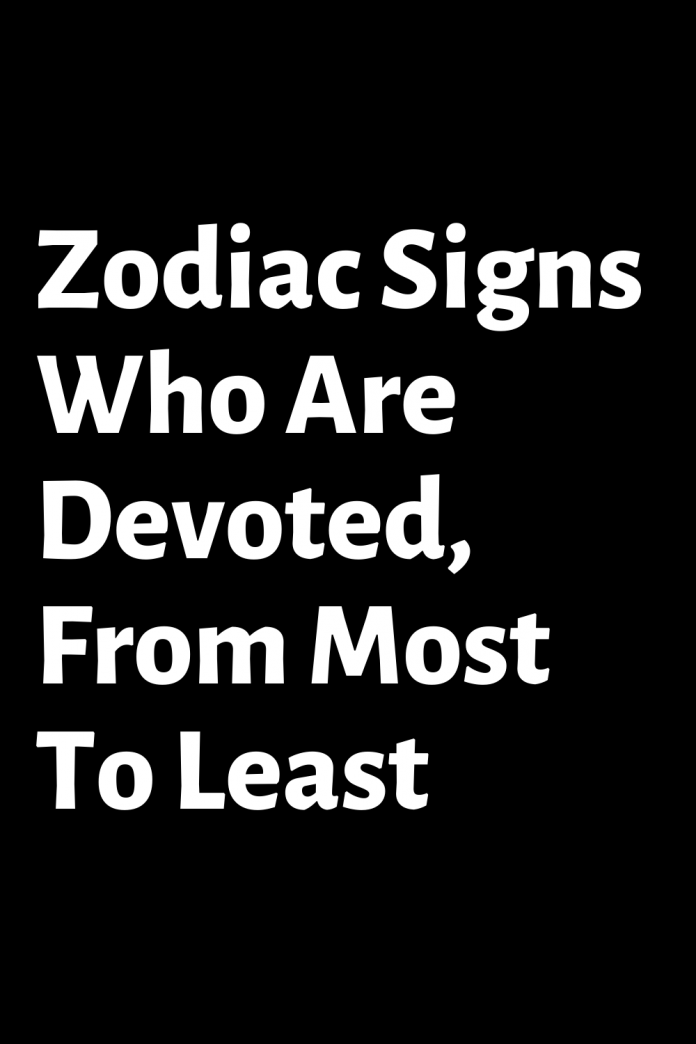 Not everyone is a cheater. At the beginning of every relationship, everyone doubts everyone.

Let’s face it, you haven’t really had the chance to get to know your partner well enough, so you’re asking yourself the biggest question – are they devoted?

The first clue to getting a correct answer is if they haven’t cheated before, they won’t cheat now. Once a cheater, always a cheater.

A person capable of infidelity can’t resist the temptation, so they fall under pressure and do something as stupid as cheating, not thinking about consequences and what it might do to you.

Either way, always rely on your gut. If it’s telling you everything is okay, it probably is. If it’s the other way around, confirm your suspicions.

As far as the zodiac realm is concerned, here are the most devoted zodiac signs ranked from most to least:

Maybe relationships aren’t their strongest suit because Scorpios lose their temper over small stuff and it takes a long time for them to trust someone, not to mention they are jealous as hell.

But when it comes to being devoted, you can count on Scorpio being there for you until their dying day. Once you gain their trust, you’ll have it forever.

Even if they no longer love you, they will stick by your side for as long as you need them. If someone goes at you hard, even if you’re guilty, you can always rely on them to have your back.

There is one bad thing about Cancers and that is they are prone to gossiping, but that is only because they can’t stand confrontation, so they vent behind your back.

Regardless of that, Cancer is a lifetime partner. The one thing that differentiates them from Scorpio is that they enjoy commitment.

If you’re in a relationship with a Cancer, you can be sure they will always be by your side – As the saying goes – for better or for worse!

The only reason why Cancer takes second place on the list of most devoted zodiac signs is because Scorpio will stay loyal to you even if you are not so close anymore, while a Cancer’s protectiveness will stop with the ending of the relationship.

Leos are always misjudged and wrongly accused of being selfish all the time, including in a relationship.

Although, it’s true that they may appear as arrogant and self-centered and that is not far away from the truth.

They enjoy the spotlight and all the attention they can get. With all of this being said, when it comes to a relationship, Loes are completely different.

When Leo falls in love, they are ready to share all their attention and centerstage with the person they love. They will defend that person with everything they’ve got.

When it comes to people they love, they are not afraid to show their claws and become overly protective.

Taurus will be devoted to you for as long as you are together. It will never cross their minds to cheat on you, not even in their wildest dreams.

The reason why they are not higher up on the list is because of their jealousy. Even if they will stay devoted and never cheat, it’s possible their jealousy will trigger them to accuse you of cheating.

Other than that, you’re lucky to have a Taurus in your life. Once a Taurus loves you, they will love you forever. They will use every second of their free time to spend it with you.

Libras have it in them to be committed to their partners for good. It’s in their nature to love for eternity. The biggest problem they have is their indecisiveness that always stands in their way.

Usually, it wouldn’t be a problem to stay devoted, but most often they are not sure if they are being faithful to the right person.

Other than, Libras are more than capable of loving and staying committed, they just need to figure out whether they are committed to the right person.

Gemini are labeled as two-faced cheaters. Because of the two sides to them, it is said they change their opinion very quickly and for no particular reason.

What you actually don’t know is that Geminis rock at relationships. When they truly love someone, they will stay devoted until the end.

The important thing is that their partner should inspire them; then there’s no need to worry. Unfortunately, they have a bad reputation and people don’t trust them that easily, thus the low ranking.

For as long as you keep an Aries happy, they are going to stay devoted. The moment you take a wrong turn in your relationship and do something wrong, you’ll lose their affection.

Aries are adventurous and the thing they hate the most is boredom. If they sense they are stuck in a rut, or if the s_- is no good, they will move on and look for fun elsewhere.

They won’t resist their urges if they are tempted and unhappy in a relationship. If you are giving them everything they want, then you’re safe, but who knows for how long, given it’s extremely tiring to keep up that tempo in a relationship.

When Virgos love, they are in it all the way, but the moment they lose their interest, they are out. Their personality is similar to that of Aries.

One way or the other, they will be devoted to you if they truly love you, but as soon as they lose interest in you for whatever reason, they will be running for the hills.

Capricorns are not that devoted, but they are not beyond repair. There is still some trust left in them and they know when to do the right thing.

The biggest problem a Capricorn has with being devoted is they give their loyalty to the wrong people.

More than a few times, a Capricorn can make a wrong move and fall in love with someone who is anti-commitment and simply cannot settle down.

So, naturally, they are the ones who give their devotion to someone who doesn’t deserve it.

The result is their dissatisfaction with the relationship they are in because they’re the only ones actually trying, which causes them to seek elsewhere.

They are deeply emotional, which means they care more about matters of the heart than the physical side of a relationship.

For as long as they are with someone who values physical more than emotional connection, that person is safe, but if the person they are dating is also emotional like them, emotional cheating will be a huge problem.

Aquarians always look at the bigger picture. They are the eternal saviors, the ones that always come up with some kind of a plan.

Whenever you’re in trouble, you can rely on Aquarian intellect to save you. Unfortunately, that is why you cannot trust them to stay faithful.

They will sacrifice their relationship in a heartbeat for the greater good. Trust me, they will throw your relationship under a bus if they see an opportunity to make the world a better place.

If you’re choosing which zodiac sign you’re going to have the most fun with, then you’ll definitely choose a Sagittarius.

The party is non-stop where they come from. On the other hand, if you’re looking for a person to settle down with, you should probably keep on searching because Sags are not up for commitment, nor can they devote to one person forever.

Sagittarians are tempted by fun and new experience. Being in a relationship is only thrilling for the first couple of weeks. After that, they are already bored and they need something new. That means you’re out, sorry!