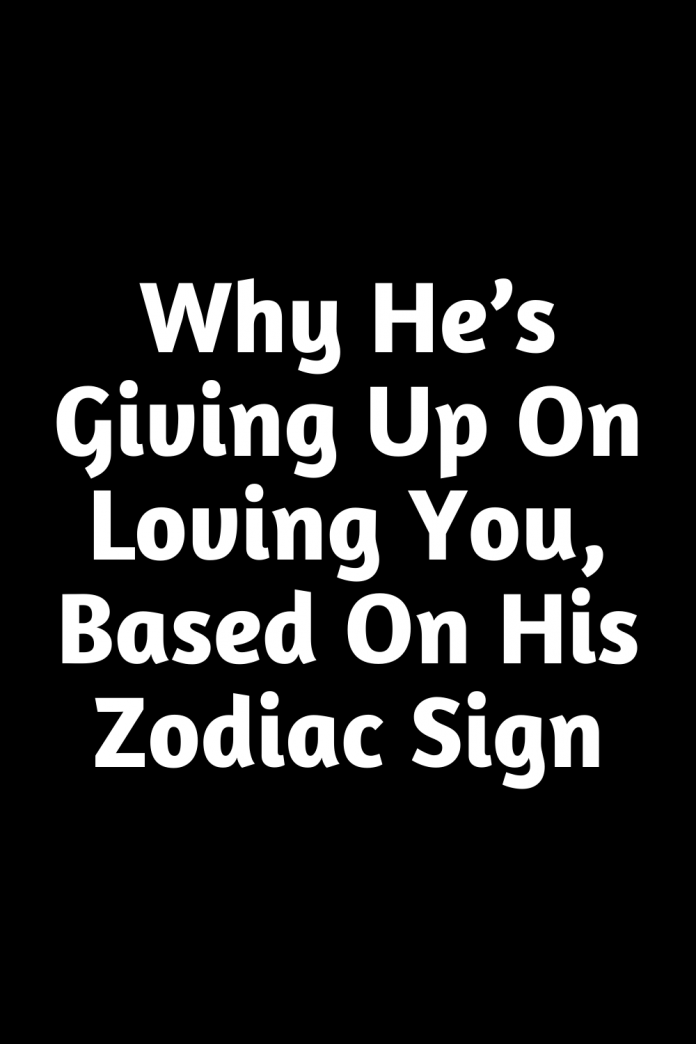 He can’t find anyone who has his same energy level and can keep up with him. He wants someone to share adventures with and challenge him. His perfect partner would be competitive and adore taking risks. He needs someone who can stand up to him and won’t crumble if he gets confrontational.

The Aries man needs someone who isn’t a shrinking violet but someone who grabs life by the horns and lives every moment to the fullest. It’s a rare person who has the qualities that Aries seeks, so he’s done searching for now.

He’s tired of putting his heart out there and getting it stomped on. He’s putting up walls and is in protective-mode of his heart.

Taurus would rather be alone than take a risk on someone who will ultimately hurt him. He was careful in his search and he still got hurt, and he’s determined not to let that happen again.

He doesn’t know what he wants, and he doesn’t want to be stuck with the wrong person. He’s afraid that if he commits to one person, he’ll immediately find someone else who is better and more exciting.

He doesn’t want to be an a-hole, so it’s better if he doesn’t look for love and just plays the field. A no-strings relationship is the best relationship for Gemini right now.

He feels that his ex was the perfect person for him and if they can’t be together then it’s better if he’s alone. Of course, since he’s built up his ex in his mind so much, even they couldn’t live up to his idealized version of them, no one could.

It’s far better for Cancer to think of his ex as being his one and only true love than to go out and risk getting disappointed.

He’s pretty sure that love is already within his grasp. He’s surrounded by love and, eventually, the right person will make themselves known; all he has to do is be open to it.

If Leo doesn’t find it immediately, that’s okay as he already has a full life and doesn’t need a life partner to make himself feel complete. Why make an effort when most things come easily to him anyway?

He’s done his research, he’s downloaded the apps, and has been a little too focused on finding the one that it’s backfired on him. He needs to step back and not put so much energy into finding someone.

Virgo is so intense that it’s scaring people away. He needs to relax and focus his attention on other things and, hopefully, love will find him without him trying so hard to find it.

He doesn’t want to be dumped. He knows that’s the chance you take when you give your heart to someone and at this point in his life, he’d rather not experience the pain of loving someone more than they love him.

There’s no sure thing when it comes to love, and by not trying to find love, Libra is guaranteed to not have to go through an ugly breakup.

He’s tired of being lied to and cheated on. He’s doubting that anybody can be counted on to be faithful and honest.

He doesn’t love one-night stands but as long as he gets his s_-ual needs met in some way, he’s cool. While Scorpio may not be actively searching for love, that doesn’t mean he won’t be longing for it.

He finds that love holds him back and complicates things. He has a world of experiences to have, and he doesn’t want to feel tied down to one person or place. Sure, he could find someone as independent as he is but that would take time away from just experiencing life.

Hopefully, when Sagittarius has satisfied his curiosity and wanderlust, he’ll be able to commit to one person, but for now, it’s all about flings with fellow travelers or locals that he’ll see just for a short while.

He needs to focus on his career right now. Love is a distraction and trying to find it takes too much time away from accomplishing his goals.

He’d like to eventually find someone and build a life for them, but he’s got to get the foundation in place first. Capricorn can barely take a day off, so how could he possibly look for love when he has such a demanding job?

He can’t stand small talk. He doesn’t want to go on blind dates or meet Tinder people for coffee. Sometimes it feels like pulling teeth trying to get his dates to open up and say something real about themselves.

He knows he shouldn’t judge them because he’s not exactly forthcoming with his personal details either. Aquarius wishes he could skip initial dates and just go right to the third date, but since that’s impossible, he’s going to take a dating break.

He doesn’t understand game-playing. He doesn’t want to follow the rules of modern courtship. If you like something, that should be enough, but it never is.

Pisces has imagined his perfect person in his head and when he meets them, he’ll know right away. In the meantime, he’s going to focus on his art.