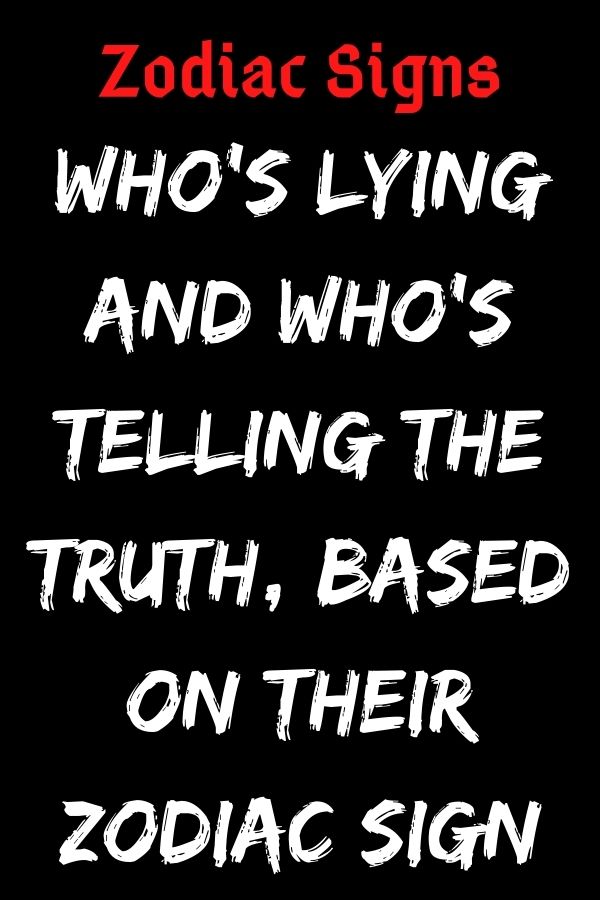 They are reckless, and they don’t think before they speak.

Therefore, they are definitely not capable of lying.

Telling the truth all the time puts them in awkward positions because the truth is not always nice to hear.

Sometimes, they’ll hurt someone completely innocent, but that won’t quiet their urge to keep telling the truth.

A career in politics is something you should never consider because you’d suck at it.

Truth is something you can’t resist, so it’s better if you stick to more simple jobs.

Aries are a bit egocentric, and they don’t handle the hypocrisy that well which means they can’t handle society surrounding them all the time.

The way they think is not that popular and that is to always tell the truth, no matter what.

It’s not foolish to say that Taurus is the most stubborn sign of the Zodiac.

They have so much trouble accommodating themselves to other people and the way they think.

Taurus will hang on to their own ideas because they are certain those ideas are the only way to go.

This sign is pretty good at avoiding telling lies, which is better anyway.

Although, no matter if someone wants to lie or not, it’s almost impossible to avoid being tangled in such a situation.

To avoid these situations from happening, Taurus escapes the slightest possibility of being connected to lying.

When they lie, they do it only to defend themselves, never to attack.

And their lying looks more like hiding the truth for their own benefit than actually lying.

And the Oscar goes to…that’s right, Gemini. You won’t find a better actor than a Gemini.

They are consistent and when they choose themselves a role, they will stick to it until the end.

Gemini will never get themselves into awkward situations because they are capable of assimilating into any surroundings.

Their intelligence suggests to them how to act in certain situations.

Hence, Gemini have no problems lying when they need to. If it’s to attack someone or to defend themselves, it doesn’t matter.

They will lie without thinking twice about it.

This would make them great politicians facing a bright future.

On the negative side, they aren’t quite trustworthy people.

Cancers are emotionally unstable which makes them perfect targets to get involved in unnecessary lies.

Cancers react to instinct, so they rarely think the situation through before making any choices.

The bottom line—they are quite unstable.

Although, on the plus side, their intuition forces them to do the right thing in the end.

If they are aware that the truth is going to affect people they love, they will lie.

If they think their loved ones can handle it, they will be honest.

Family and friends are very important to them which means they will never hurt them even if it means telling the truth.

The family bond is something sacred they don’t want to mess up— – at any cost.

Leos have integrity. They are honest and loyal.

They will stick to those traits even if it means they have to compromise their well-being.

Lying is not a common trait with this sign, so they will tell the truth almost always.

On the other hand, when Leo is defending something he really cares about, he won’t blink twice about telling a lie.

At that moment, all compromises and integrity fall apart because they have to have what they had in mind.

They are ready to go to great lengths just to get what they want.

Taking all of this into consideration, it’s hard for them to have many friends.

There aren’t a lot of people out there who are ready to agree with a Leo one hundred percent, especially in the situations where Leo forgets that a compromise is possible.

Virgos are more than capable of lying, especially when their integrity and competence are at stake.

They will do anything to protect themselves from criticism.

It’s true they will lie at any cost, but it’s also true they are scared of getting caught.

That’s why sometimes, they will stop themselves if they assess that someone might be on to them.

They couldn’t absolutely handle being exposed publicly for what they lied about.

They won’t lie all the time, but they will definitely lie if that’s necessary.

Libras are all about stability and morality.

Finding the perfect balance is actually their end goal in life.

They act accordingly with lies, too.

Libras have a constant need to stick to moral principles and make others act like that as well.

When morality is at stake, they are even willing to lie a bit.

They are willing to do anything to obtain the perfect balance.

When they lie, they also lie for the wellbeing of the person they love.

When they’re telling the truth, they are as loud as they get.

Meet the best liar of the Zodiac!

Their instinct to lie is so strong they can’t even control it.

On the other hand, they don’t want to control it either.

They find it absolutely amusing to see other people’s reactions when they tell a lie.

Sometimes they get so involved in their lies that they create a completely different image of themselves.

Anyway, they are very trustworthy because they manage to keep secrets.

They are in total control of their instincts, so they can keep quiet when they have to but just to avoid hurting themselves or people they care about.

Sags are the most honest sign of the zodiac.

Naturally, they are so good inside that they automatically think that everyone else is just like them.

If they are telling the truth, so is everyone else.

That’s the reason why they get hurt almost every time.

They don’t know how to lie, but it can happen that sometimes they overstate a few things in a conversation which makes them feel guilty afterward.

Then they come back and try to make things better, but somehow it only gets worse.

The ambitious and limitless Capricorn has no obstacles toward their goal.

If that means hiding the truth to make their plans come true, so be it.

As far as real lying is concerned, Capricorns will only lie when that’s absolutely needed.

Capricorns behave very carefully not to accidentally create themselves an enemy who can harm their way to the top.

They tend to be very friendly to everyone in all life spheres.

In everyday life, Capricorns hold on to moral conventions, and they don’t lie.

On the contrary, they are honest and loyal.

People born under this sign will try so hard to protect the ones they love by avoiding telling them the truth.

Therefore, it’s safe to say that Aquarius is only lying when it’s absolutely necessary for the greater good.

They are also very diplomatic, and they can perform as middlemen between two completely different people of opposite mindsets.

There won’t be a fight because an Aquarius has a way with words and can handle it very well.

Pisces will only lie when they are faced with situations from which they really want to get out of such as life obligations for which they are really not ready.

Pisces live in their world of fantasy where time flies faster, and there aren’t any tasks they have to do.

There are occasions when they are capable of lying about their own past, present or future to an extent that they start believing their own lies.

Lying helps them present things as much nicer than they really are or even it helps them score positive social points with people listening to them.

However, although they can lie from time to time, Pisces don’t want to hurt anyone.

So even when they lie, they are usually trying to help.