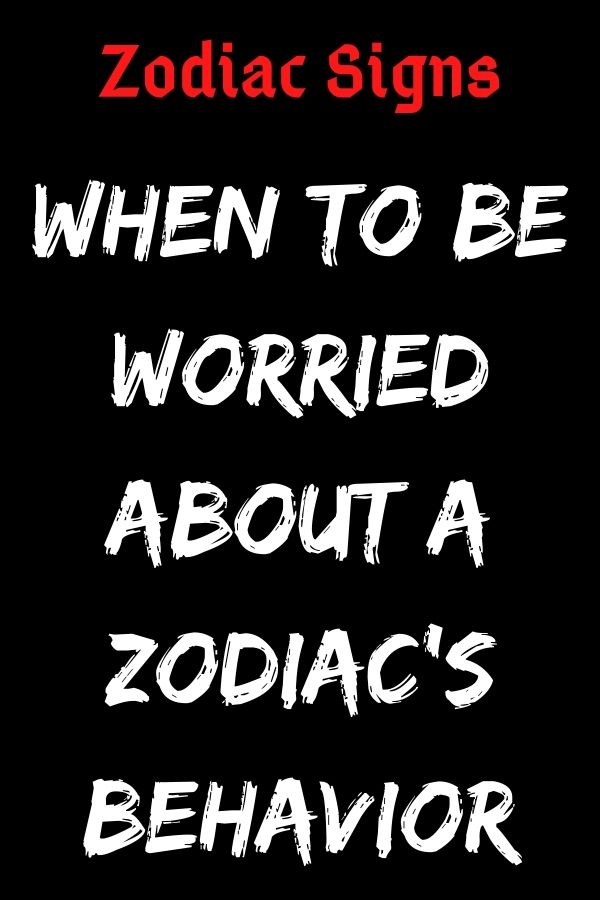 We all know the fun and good sides of our zodiac signs and we know the bad sides too. They all paint pretty clear pictures of the signs.

But what happens when signs suddenly start acting differently? What’s that about and should you be worried?

Aries is a fighter and a person of action. They love hard and they let go hard. They’re competitive and don’t like to lose in any aspect of life.

If your Aries shows signs of giving up on you, that’s when you should be worried, as it’s unlike them. If they’re giving up, it means it’s over for them.

Taurus is a very stubborn and opinionated sign. They love to defend and advocate their opinions and they enjoy having stimulating conversations.

When they stop doing this, it’s time to get worried because that might mean they have stopped caring.

Geminis are famous for their liveliness and chattiness.

They always bring good spirit and fun into conversations and they’re always the one who moderates it.

If Gemini is too quiet, that’s never a good sign. Ask them what’s wrong and pray they will answer with something that’s not vague.

Cancer is the sweetest zodiac sign of them all. They’re very caring and compassionate people who love to love.

That’s why coldness from Cancer can mean something isn’t right. If Cancer is cold or angry, you better run.

Leos love their attention but they always do it tastefully.

They don’t like attention for doing something weird, they just want to be adored for who they are.

When Leo goes out of his way to do something that’s considered risky, it’s time to worry.

Virgos are known for their sharp intellect and meticulous nature.

They pay great attention to detail and care about how they represent themselves.

If you see a Virgo who’s not put together and doesn’t care about their appearance at all, it’s something to be worried about.

Libra is the sign that gets along with almost everyone. They’re very warm-hearted and know how to deal with people.

They value everybody’s opinions and are usually non-conflictual.

For this reason, you don’t ever want to see Libra angry. If they’re angry, it’s over because that means you’ve gone too far.

They’re completely immersed in everything they do and they love to feel everything deeply and they also love to show their appreciation in every way possible.

When they’re passionless and empty, that’s when you should be worried.

Passion is like air for Scorpio; if there’s no passion, something’s wrong for sure.

Sagittarius is the most outgoing sign of the zodiac.

They’re definitely not homebodies and they prefer to do something more adventurous whenever they can.

If your Sagittarius doesn’t show signs of wanting to go out, something weird is going on.

Either they’re not sure about you or they don’t feel well emotionally.

Capricorns are ambitious and very practical people. They don’t waste time on things that don’t provide them with something valuable.

That’s why it’s definitely weird when you see Capricorn doing nothing.

They’re the busiest of the zodiac signs and hard work and ambitions are their trademarks, so if they are not busy, something’s wrong.

Aquarius is the scientist of the zodiac.

They’re full of new ideas and concepts you have never heard about and they LOVE to bring new perspectives to people.

That’s why it’s weird when they run out of ideas and have nothing to say. This is definitely a sign that something isn’t right.

Pisces are the dreamers. They love to imagine worlds of their own and share them with the people they love.

If Pisces starts acting all serious and practical, that means something is bothering them.

There’s something they are fighting with within themselves. Try to find out why.