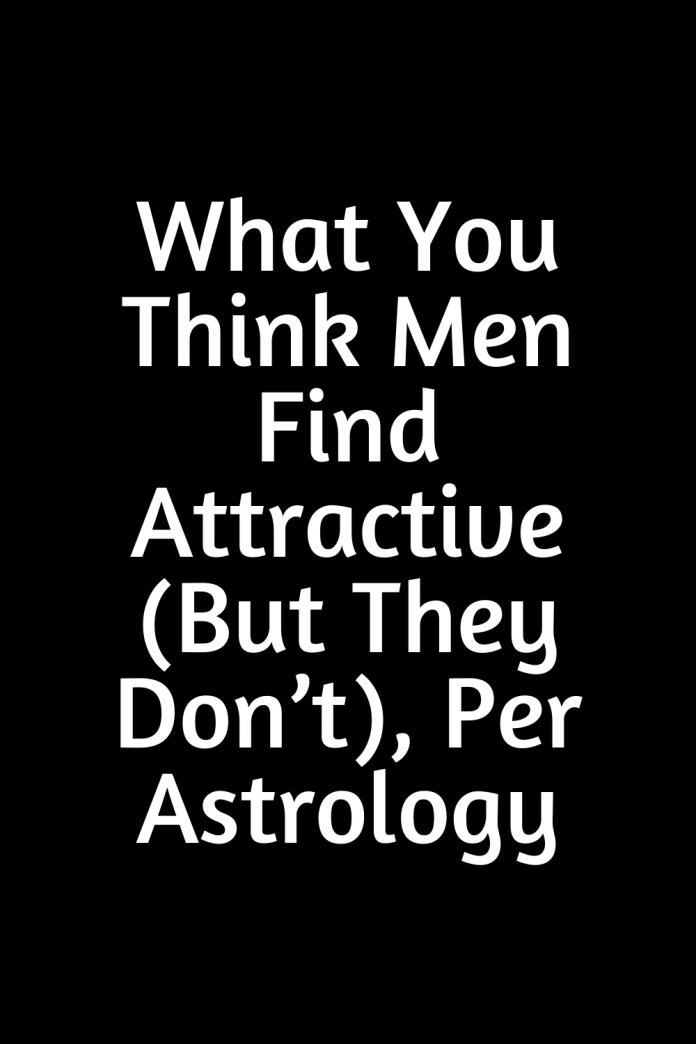 Not everyone finds the same thing attractive. Sometimes you might think that a personality trait is truly amazing… and the guy you’re trying to impress actually dislikes it when that side of you comes through.

When you first start dating someone, you always try to put your best foot forward. You want him to notice you over everyone else in the crowd and think, “Yeah, that’s the person I need to get to know,” rather than totally skip over you and lock eyes with someone else.

But along with putting our best foot forward, we also tend to act like someone who is maybe, not really the true us. I mean, I have definitely changed my music taste and fashion sense to attract certain people, which really didn’t do anything except make me feel silly when I realized that I didn’t really like that person as much as I previously thought.

My point is, you always want to be yourself when meeting someone new. On the other hand, you also want to show him that you’re crazy attractive and that he has to have you right now. Unfortunately, not everything we do is as attractive as we think it is.

Remember the duck face pose everyone did in their selfies? Yeah, I still cringe when I think about how unattractive that really looked. And even as trends change and you’re bound to be attracted to people who find all sorts of things attractive and cute, you’re still bound to try something that you might think will work on him but will probably make him reconsider.

I mean, you’re still definitely a catch, but you might want to tone down the vibe you’re trying to give off. Another rule of thumb is to get to know your horoscope sign better. Each zodiac sign does something that is probably less attractive than they think it is.

And if you know what that is, you can probably help yourself out a bit if you cut it out. I always like to think about S_- and the City when I imagine what I would find unattractive about someone. Maybe you meet someone who’s main move in the bedroom is baby talk… yeah, that’s gonna be a no from me.

Or maybe there’s a guy you really like who’s aggressive and bossy – and it’s super s_-y. But then you realize that he’s actually just a total jerk and your rose-colored glasses were getting in the way of you seeing the truth.

There are no rules to what you might find attractive over unattractive. And sometimes, you can’t tell when something someone does is unattractive until you’re around them for a while.

Sure, it’ll suck to know that he’s not all you thought he was cracked up to be, but at least now you know the truth! But if you really want to stick with this one person, you have to make sure that you really are putting your best foot forward – and not doing something easily avoidable just because you think it’s attractive.

Aries, you like being taken care of. Having a big, strong man to make the decisions for you is incredibly romantic in your eyes. Maybe because it’s so unlike you to give up control to someone else, but you’re really into guys who can be your knight in shining armor.

But what you see as cute and attractive, he sees as totally annoying. You need to be babied and coddled means he has to act like a parent, not a boyfriend. When you don’t get your way, or you don’t know how to do something, you whine and make him feel like he needs to do everything for you. Not attractive in the slightest.

There’s nothing wrong with wanting to feel and look your best, Taurus. You should want to be your best for him all the time (and for yourself, of course). But there is a difference between striving for your best and being totally obsessed with your appearance.

He finds this obsession totally unattractive about you. And it’s not just your obsession for looking good. You act as though eyes are always on you; like you’re a celebrity. Whenever you go out with him, you act like you have an audience and your personality turns into something shallow and obnoxious because of it.

One of your “must haves” when looking for the right guy to date is having someone you can chat with all the time, Gemini. You need that BFF-slash-BF who will listen to you endlessly as you tell him everything about your day. Wanting to have this emotional closeness is attractive!

But the way you do it is not as glamorous as it sounds in your head. In fact, you end up turning your little chats into gossip-fests and trash-talking events. It’s incredibly unattractive to him to listen to you badmouth literally everyone you know, all while he’s supposed to sit there and agree with you. Trust me, he’d rather not bother.

Not everyone can be as in tune with their emotions as you are, Cancer. There’s something so refreshing (and attractive) about having a partner who will tell you exactly how they feel, when they feel it – rather than making you guess what’s going through their head.

But what’s unattractive is how sensitive you can be at times. There’s going to be moments when your man might raise his voice or get frustrated with you. But instead of being able to work it out like adults, you immediately start crying and can’t turn it off. So, problems never get resolved and he constantly has to tread lightly around you.

Okay, Leo, let’s get it out of the way: You can be a little bit needy. But really, it’s not all that bad. It can be kind of adorable when all you want is to snuggle up to your man and spend time together. It’s only when you let this constant need for affection get in the way of everything else.

What makes this trait of yours so unattractive is when you throw tantrums when he forgets to compliment your outfit, text you good morning AND good night, and won’t keep you updated on what he’s doing when he’s out with friends. Making him miss out on friends because you need him (even though you JUST saw him) is exhausting.

Virgo, you have high standards for everything in your life – sky-high standards, that is. You want the best of the best, and you aren’t afraid to work hard to get it. That can be incredibly admirable in the right situation, especially since it makes your man feel extra special.

There’s no denying that you like living the good life, Libra. You especially love that your man is into it, too. There’s something so attractive to you about having a partner who is willing to spoil you from time to time. And your man loves that you love yourself just as much as he does.

But what makes this trait unattractive is your obsession with overindulgence. How can you think about getting a place together when your credit cards are always maxed out? You can’t even go out to dinner this weekend because you spent your grocery money on shoes… AGAIN. He likes spoiling you, but not if you can’t take care of yourself when it matters, too.

One of the main things that first drew him to you was your mysteriousness, Scorpio. He absolutely loved the way you would only give him little peeks into your life. He even thought it was s-_y that he had to work so hard to get you to notice him. But now? Now, it’s just a mess.

It’s so unattractive how locked away you are. He practically has to beg you to open up to him, and when you’re provoked like that, it can incite a terrible argument. He feels like he can’t even talk to you, which is heartbreaking because he feels like there’s a real connection. But now, he’s tired of trying to get to know you after so long.

When he first met you, he was totally head over heels with you. Your self-confidence was so s_-y! He loved that you always believed in yourself and could stand up for what you believed in. In fact, it made him more confident just being around you.

It’s only after being around your “self-confidence” for so long that he realizes that’s not what it is at all: It’s narcissism. You tend to make everything about you, which makes you seem selfish and shallow. It’s almost as if he only exists when you want him around. Otherwise, he’s just wallpaper in his own relationship.

Capricorn, the most attractive thing about you is how refined you are. You set high standards for yourself, and you always try to live with as much decadence and sophistication. Only the best for you, right? And he admires that – you don’t waste your time on things that don’t matter.

That said, your refined taste can turn convoluted after a while. Rather than acting sophisticated and grown-up, you act snobbish and picky. You won’t go to a certain restaurant, you won’t hang out with specific people, and there’s always something wrong with everything. He finds it so unattractive how you’re always on your high horse.

There’s no denying that you like to stand out, Aquarius. You’re the kind of person who always has an opposing viewpoint, a different hair color, and a unique fashion sense. It’s probably why he thought you were attractive in the first place – you show him that it’s okay to be different.

Of course, there’s a difference between being quirky and unique and just plain weird. What’s NOT attractive is how you deliberately stand out from the crowd, then get awkward and weird when people notice you. You sometimes make him wonder what you’re doing, and frankly, he finds it unattractive that you can’t always own up to the person you want to be.

Pisces, you have all the makings of an amazing partner: You’re kind, selfless, and crazy romantic. I mean, how can anybody NOT fall in love with you?! He certainly has, but just because he finds you to be cute as a button doesn’t mean you also have some unattractive traits.

One of your most unattractive traits is how you always try to be someone you’re not. If we want to get blunt, you’re a flake. You will constantly cancel plans, make up stories, and lie just to get out of doing something. And for what? All he wants is to see you, yet he can barely get ahold of you because you’re “busy” again. Is it laziness or do you really not want to be with him?