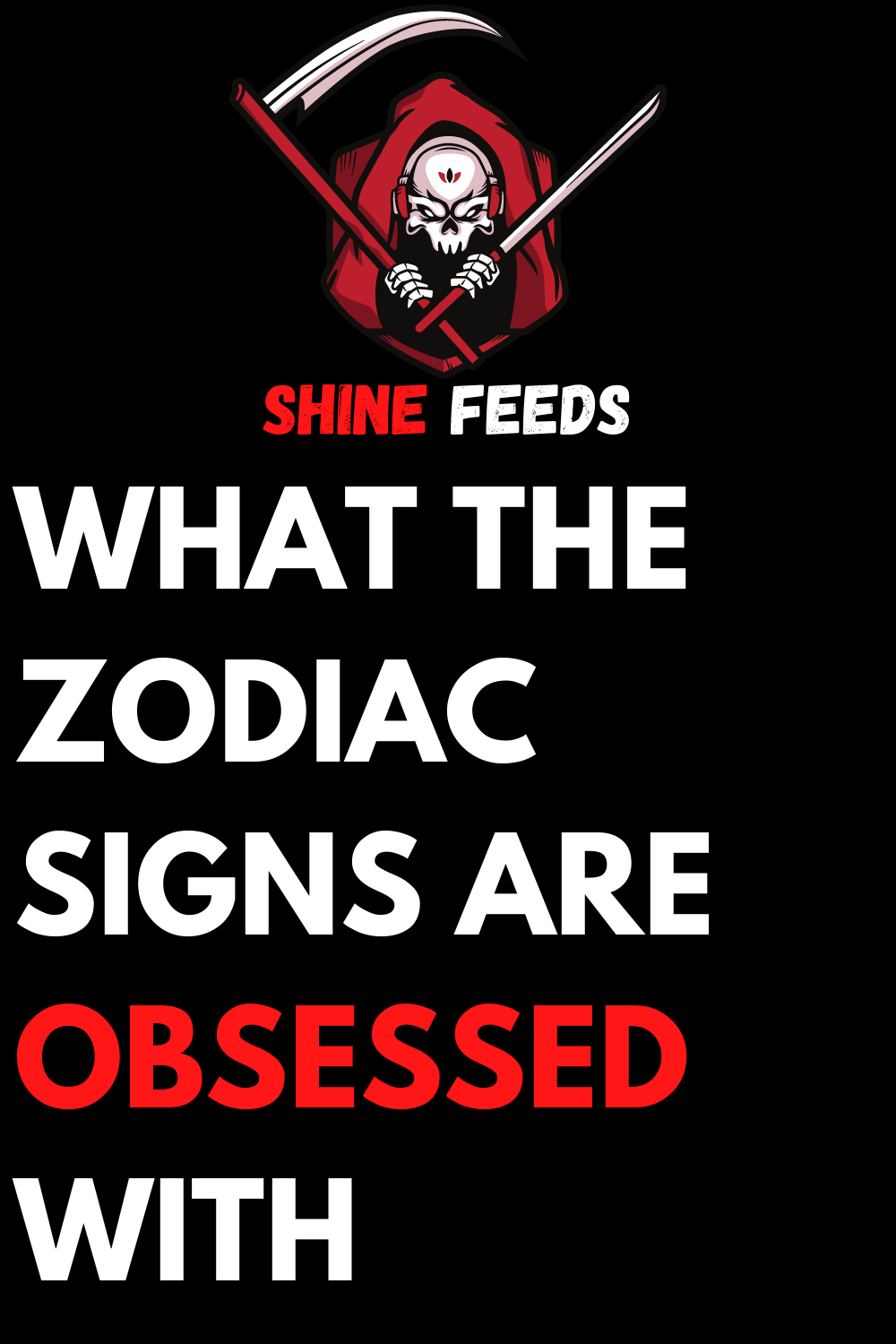 WHAT THE ZODIAC SIGNS ARE OBSESSED WITH

Find out what is the biggest obsession of the various signs of the zodiac. The opinion of the stars sign by sign.

Each of us is made up of thoughts, passions, fears, and even obsessions. Strong emotions that involve in a lasting way and that in some way characterize those who try them. Which happens both positively and negatively. Most people, after all, tend to act on what they hear and what they like and that prompts them to appear a certain way.

So there are people who seem obsessed with hygiene, those obsessed with punctuality, and those who can’t do without something that makes them special for their way of being. In short, for almost each of us there is at least one small obsession to tell. And since these can also depend on the influence of the stars, today we will try to understand what the obsession of each zodiac sign is to learn to know us better and, why not, to understand others a little more.

What haunts the various signs of the zodiac

Aries – Those obsessed with time
Those born under the zodiac sign of Aries are people who love to live for the day and who tend to always start an infinity of projects. Many times, the problem is that they have to leave something behind for lack of time. And, needless to say, this is their biggest obsession. Thus, they are always seen running, grinding kilometers as if they were runners, and avoiding even lazing around in bed. And all to always be short of hours to be able to do everything. An obsession from which they could simply return by making fewer commitments and starting to enjoy things a little more.

Taurus – Those obsessed with the need for possession
The natives of the astrological sign of Taurus are people rich in qualities. At the same time, however, they too have their own obsessions. Often jealous of their own affections, they do not like to open up completely to others and tend to be quite wary of those they do not know more than well. If we talk about real obsessions we can say that they have that of controlling the people they love. The natives of the sign, in fact, do not like to be confused about the aspects that characterize their life. And these also include the people involved. For this reason, at times, they can become heavy demanding certain things from others. Which in the long run can lead them to have many problems in relationships. For this reason,

Gemini – Those obsessed with the fear of getting bored
It can be said that those born under the zodiac sign of Gemini do not have who knows what fixations. In general, in fact, they are people who love to change constantly. Which prevents him from fixating on anything in particular. Sometimes, however, this need to always have something to entertain them ends up culminating in a true obsession with boredom. Their ancestral enemy, boredom is seen as something terrible and with which the natives of the sign do not know how to deal with. A problem that must be overcome with a lot of training and giving oneself, from time to time, the demonstration that being bored is not so terrible and that even the limpest moments can give rise to ideas for interesting activities.

Cancer – Those obsessed with the past
The natives of the Cancer zodiac sign are people who love to take refuge in memories. Nostalgic as few do nothing but think and rethink the past. This is also their biggest obsession. In fact, these are people who, in addition to rethinking the past, often find themselves regretting it and feeling bad about it. For this reason, they are obsessed with everything they have done and that it is no longer possible for them to live. A way that often makes them sad and leads them to live in a less pleasant way than they could do. In fact, it would be enough to make an effort to grasp what is precious among the memories to make them stronger and even the present would become something important to live.

Leo – Those obsessed with appearing
Those born under the zodiac sign of Leo are people who have a great need to be noticed and appreciated by others. Often this way of seeing life leads them to be obsessed with their appearance, how they are perceived and how much others like them. Although they are very good at making the world notice them, the natives of the sign often end up taking the balance, ending up pretending to always be in the spotlight. A way of thinking that can sometimes cause them some discomfort, leading them to tighten up relations with those who sometimes would like to be at the center of their attention. Learning to dedicate oneself to others could be their turning point, allowing them to feel more serene and in harmony. Both with oneself and with others.

Virgo – Those obsessed with accuracy
The natives of the Virgo zodiac sign are among the people with the most obsessions within the zodiac. For them, in fact, everything must be precise. And when that doesn’t happen they become nervous and argumentative. Normally they are obsessed with order, punctuality, and all those things that can be done both good and bad. In short, for them to live badly in certain situations is so easy that they are now more than used to it. The secret to changing your way of being? Begin to resign yourself to people’s unpredictability and not expect everything to be done literally. In this way, they could even discover a way of life that is more carefree and less problematic than that experienced to date.

Libra – Those obsessed with justice
Those born under the zodiac sign of Libra are famous for being balanced and for always betting everything on a fair distribution of values. Their greatest obsession then comes when they feel that this balance tends to vanish. An example? Natives of the sign tend to be obsessed with justice. They can’t stand that something goes wrong with either them or the people they love. And they tend to take everything very personally, suffering a lot and losing part of that calm that characterizes them. Working on themselves and the ability to accept that sometimes things don’t go the way they would like is the only thing they can do to feel better. Only in this way, in fact, will they be able to maintain constant the balance that is naturally part of them and which is also the basis of their marked lucidity.

Scorpio – Those obsessed with perfection
The natives of the zodiac sign of Scorpio are in great need of beautiful things and situations that unfold in a simply perfect way. This need translates into a strong ability to always give the best. Sometimes, however, it can turn into a form of obsession. When this happens, the natives of the sign tend to take bad things and things and to fix themselves so much that they cannot find a solution. Learning to appreciate even the small imperfections by grasping what is special and unique could help them. In this way, in fact, the natives of the sign could finally feel more serene and free to live things as they come. And all without always having to imagine and organize everything.

Sagittarius – Those obsessed with always getting what they want
Those born under the astrological sign of Sagittarius have a somewhat capricious attitude towards life. For them, in fact, it is essential to always be able to get everything they want. And when this does not happen, they end up feeling like victims, becoming nervous and not very treatable. Theirs is almost an obsession with happiness that sometimes leads them not to think as they should about the many reasons why sometimes things don’t go as they should. Learning to look at others, being more empathetic, and understanding that everyone in the world lives a bit the same could be their way out. A way to regain the joy of beautiful things. Those for which to feel lucky and not believe that it is simply something that was due to him.

Capricorn – Those obsessed with control
The natives of the astrological sign of Capricorn are constantly busy with their commitments and the desire to make everything turn as they wish. So, when they become so many they end up being obsessed with the need to control others. To do this, they go to everything, even trying to lead those around them to do or say what they want. The problem is that when they fail they go into crisis and become nervous and intractable. A problem that the natives of the sign carry with them until things turn in their favor. Unfortunately for them, however, not all of them are controllable. The only way out is therefore to learn to live with the awareness that sometimes things can go differently than they would like.

Aquarius – Those obsessed with chaos
Those born under the astrological sign of Aquarius have a real obsession with everything that confuses their mind. They tend to experience chaos and confusion as something horrible and without which they would not know how to move forward. For this reason, they always try to organize themselves so that they don’t have to deal with such a problem and when they can’t they become literally intractable. Learning to appreciate what they consider disorder could help them to better live the situations they cannot manage and this could help them to lead a life that is certainly more peaceful and easier to manage.

Pisces – Those obsessed with loneliness
The natives of the astrological sign of Pisces are literally obsessed with the fear of being alone. Sensitive like few others, they always need to know they have someone they can rely on. Ironically, this obsession of theirs also extends to others. The reason why they live badly at the thought that someone they know may feel alone. They certainly can’t act on their own empathy (which among other things is a really valuable quality). They can, however, train themselves to contemplate loneliness in other respects. In this way, perhaps, they would be able to live a little better and with less sadness. Especially those moments that, after all, are not as terrible as they may seem to him at first glance.