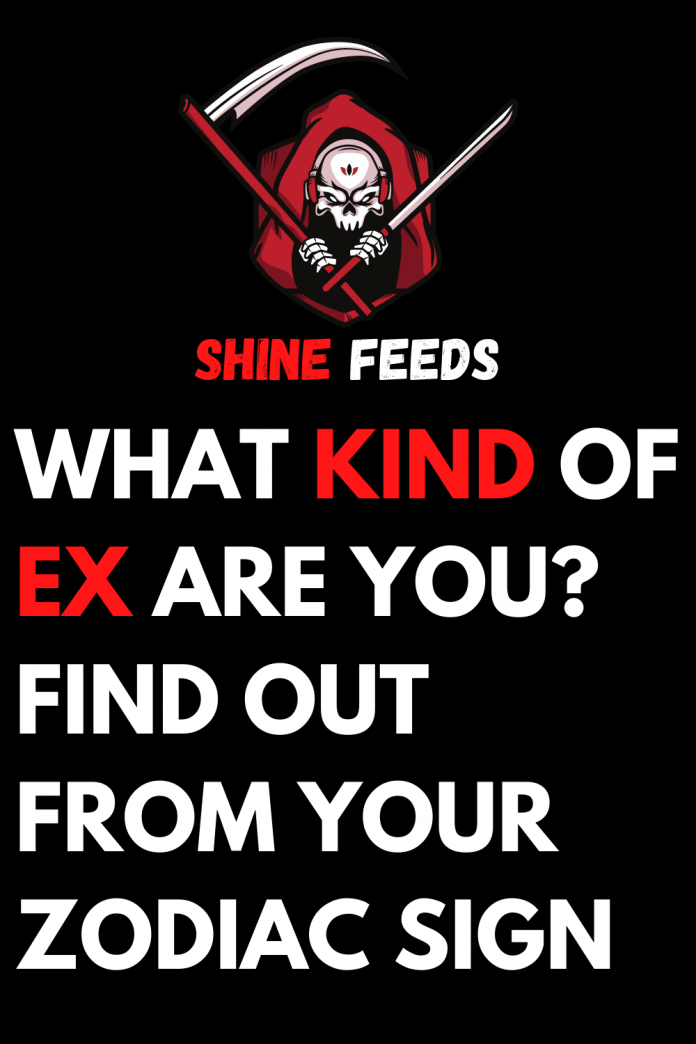 Find out what kind of ex you are based on your zodiac sign. The opinion of the stars for each sign of the zodiac.

When a love story ends, the emotions you feel are often different and depend on various factors such as the reasons that led to the breakup and the feelings at stake. Yet, each of us has ways of doing that tend to always remain the same and that repeat themselves story after story in a circle that seems almost vicious.

To dictate emotions and attitudes are obviously personal past, temperament, and even the influence of the stars. And in that regard, today we will discover what kind of ex is hidden inside each of us. A way to get to know each other better and to get an idea of ​​how we are seen by others when we are struggling with a finished story.

Aries – The one who distances itself
When a love story ends, you do everything to forget about it. And you work hard enough to make it soon become a distant memory. Of course, if you were the one to leave it all will be incredibly easy for you. If not, instead you could initially try some approach but then get tired and return to your usual attitude which is that of the ex who immediately distances himself. Not to mention that it evaporates as if there was never a story.

Taurus – The one who makes a point of it
Basically, you are a person who loves to rationalize about everything and who always tries to appear superior. Even if the end of a story kills you inside, try not to show it and show yourself as strong as you can. An attempt that you succeed more than well since on the other side the feeling is that of an ex who has taken things with a discrete calm. The good news is that after a while, what is the only appearance gradually becomes reality. The reason, in fact, always tends to prevail and to show a side of you that is much stronger than you yourself imagine.

Gemini – The One Who Thinks Over It Over and Over
Let’s face it, your stories always end up over and over again. Unless you are left without the possibility of appeal, you are in fact used to go back to your decision several times. So, regardless of how things go, you are for everyone the ex who thinks and thinks about it and the one who tends to make a certain confusion. It is certainly impossible to forget about you. But are you sure you want to be remembered like this even by those who don’t really want to think again? Sometimes a little healthy indifference can be the best weapon.

Cancer – The one that binds it to
your finger You’re being touchy precedes you and when it comes to love stories this is certainly the first image that others make of you. Because whether it is you who leaves or your partner ends the story, your reaction will always be negative. Not for nothing do you tend to take a hostile attitude, putting your face and showing that you have no desire to forget any wrongs suffered. Because if the story doesn’t go, it’s clear that the other person is to blame, right?

Leo – The One Who Gets Hostile
The end of a love story always puts you in a bad mood. And regardless of why there is the breakup, it is clear that your attitude is unlikely to be positive. Generally, in fact, you tend to become negative, and to take away from doing that can almost intimidate the ex of the moment. A way of doing which you are aware of and which in some ways you act of your own free will, determined more than ever to assert yourself and always demonstrate that, beyond everything, you are superior to everything, even to those who have not been able to keep you at his side.

Virgo – What is bad
For you, facing the end of a story is never a simple thing. And this regardless of how things went and how emotionally involved I was. What does not go down is the idea of ​​failure that creeps into your mind and you want to see everything black. A way of doing and thinking that complicates your life unnecessarily since many times, with a clear mind, you are the first to admit that things were wrong and that ending the story was the wisest choice. So why not change your attitude to embrace a more positive way of experiencing things?

Libra – The One Who Is Never Happy
Regardless of how your romance ends, the truth is that you will never be happy. It all depends on your always aiming for perfection, which makes you feel inadequate in the face of any possible mistake. So, like an ex, you tend to blame your partner on one side and you on the other. All for a general discontent that is reflected in your actions as well as in your words. As an ex, you are therefore quite distant and often judgmental. Something that can hurt and intimidate an ex, especially if they are still in love or unsure why things have stopped going well at some point.

Scorpio – The Unpredictable One
As an ex, you are definitely hard to deal with. In fact, your way of porting changes based on how you experience the end of the story. If there are no more feelings on your part, you can even become your ex’s best friend. But if you are still in love with him, you can turn into an ever-present ex, to the point of obsessing those who dared to leave you. At the same time, if the story ends because of a betrayal or some unforgivable mistake on the part of the other, then you become the ex to fear because your thirst for revenge will be what will move you day by day. Certainly, however, things go, dealing with you will never be boring or even taken for granted.

Sagittarius – The
one that gets over it after a while It’s true, you don’t like seeing a story that ends and often leads you to wonder where you went wrong and why. Once this is done, however, your desire to live peacefully pushes you to try to get over it. Having you as an ex, therefore, is never seen as a problem as long as you let some time pass or that period in which, still upset by the end of the story, you tend to have discordant and sometimes negative attitudes. Which happens especially if you were left out of the blue and still have to get used to the idea. Fortunately, your will to live and do its best always wins out in the end.

Capricorn – The one who thinks of herself
Whether it’s a story that ended by your will or at the request of your partner, your attitude tends to always be the same. In fact, what you really care about is feeling good and feeling in perfect balance again in the shortest possible time. This usually pushes you to distance yourself. A way of doing that in some cases can be taken positively but that in others can be seen as a sign of detachment and therefore of coldness. In short, however, things go, in most cases, you will be seen as a person who distances himself from everything. Luckily, what other people think doesn’t matter to you, right?

Aquarius – The one who becomes a stranger
Yes, like an ex you are perceived as someone who doesn’t care, who goes on his way and quickly forgets about his exes. This, therefore, makes you an ex easy to deal with (or not to deal with at all) and at the same time a person who knows what he is doing and who knows how to take things with certain diplomacy. In other words, you definitely look positive. Except maybe when you leave, a situation where you may lack empathy and be branded as a cold and detached person. Which, while it’s definitely not that important to you, doesn’t make you look your best.

Pisces – The sentimental one
Often when a story ends you tend to feel bad about it. And this happens both if you are the one to put an end to it and if you are left behind. Your being sensitive in fact leads you to live badly the thought of interrupting the journey undertaken with a person. And this means that for better or for worse you are perceived as a sensitive and romantic person. An image that in most cases is positive. And that’s unless you take the end of a story so badly that you try to do everything to stay together. Apart from the extremes, therefore, in most cases, you are perceived as a positive person that everyone extends to remember with some affection.