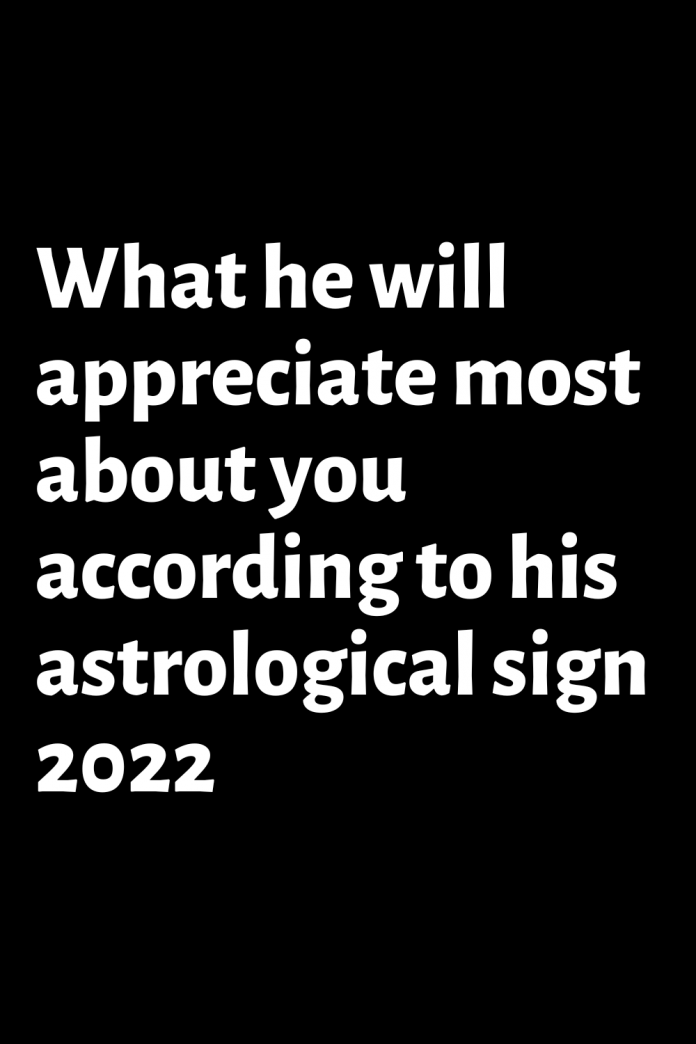 Men born under the sign of Aries are great enthusiasts. They can’t keep still. They want to have as many adventures as possible, an active social life and a successful career, all at the same time.

They know what they want and they want it right away. They have no time to waste.

So naturally an Aries man wants to have a woman who will be as passionate as he is in life.

Taurus is similar to Aries. He is deeply passionate and motivated. If he focuses enough on something, then he is sure to get there.

Taurus men are generally incredibly successful in everything they touch, not to mention their loyalty. When they are interested in a particular person, they are able to cherish them forever.

He wants a successful woman by his side, but he doesn’t want you to mind his own business either.

If you want him to like you more, you’re going to have to be just as stubborn and passionate about something that is close to your heart, because if you aren’t, your relationship won’t last.

Gemini are very intelligent and very social. They love to hang out with their loved ones and they love to go out. Their intelligence is their strong point and they never shy away from a pleasant and quality intellectual conversation.

What a Gemini doesn’t really like is that there is too much drama around them. He wants someone who is as reasonable and intellectual as he is.

He wants a person who enjoys social gatherings, someone who knows how to deal and act with people – he wants a socially intelligent person.

If you want a Gemini to find you desirable, avoid the drama and don’t complicate matters. He wants a girlfriend who doesn’t ask too much and who is perfectly capable of handling her day-to-day issues without too much fuss.

Much like Gemini, Cancer also doesn’t want to have to put in excessive effort with someone.

Men born under the sign of Cancer are very fond of changing their minds. One moment they’re shy and very insecure, and the next day they become the worst bad boys you’ve ever met.

If you’re the type of girl who has a problem with her behavior and you make a big deal out of it, then you’re not the type for her.

He will not stand for you to argue with him. At first, he will be able to turn a blind eye to your behavior, but over time he will change his mind.

So, if you really want to be desirable in a Cancer man’s eyes, stop complaining and arguing.

Leo men are known to be very confident and self-assured. Sometimes they are even known to be extremely arrogant when they think they are right.

Only their opinion counts and that of no one else. They therefore need a woman by their side who will know how to support them and support them at all times.

A Leo man will make all the decisions about your relationship, and he’ll enjoy being the center of attention.

If you are his girlfriend, he expects you to be by his side no matter what and be supportive of every decision he makes.

If you do this, he will cherish and love you for the rest of his life.

In addition, due to his strong temperament, he needs someone who will know how to control him and prevent him when necessary.

He needs someone who knows how to deal with his crazy passion, which easily turns into irrational anger if something doesn’t go his way.

Virgo men are extremely intelligent and sensitive. They are also very analytical and very polished.

When we talk about the Virgo man, we have to imagine a man who is always in the middle ground. He is neither too social, nor too shy, nor too innocent, nor too manipulative. He always balances everything around him.

What you need to do to be desirable in the eyes of a Virgo man is that you need to know a lot about everything. He finds it extremely lovely that a woman is confident and intelligent.

He wants a woman who can make her own decisions and who will stand by whatever she says.

Libra men are, in general, very confident and very self-assured. And that’s why they find it hard to resist a woman who is exactly like that.

Libra men are outgoing and outgoing in general, it is very easy to get along with them. However, the only thing they can’t stand is insecurity and indecision.

They are already tired of having to face theirs and don’t want to be forced to face yours too.

If you want to successfully seduce a Libra man, you are going to have to strive to become what you want to be and to be yourself in all situations.

Only then will a Libra man be able to respect and love you.

Scorpio men are driven by passion, sometimes that passion turns out to be good and sometimes it is bad.

They sometimes do things that they later regret. Either way, passion is one of the strongest traits of the Scorpio man.

If you want to win the heart of a Scorpio, just be a good person and act on your feelings. Be honest and he will fall under your spell.

If you create trouble or drama around him, he won’t stay with you. He’ll just go away without even looking back.

Men of the sign of Sagittarius are generally lovely and very intelligent, and therefore, they want a girl by their side who will be nothing less than that.

They want to find a special person who will know how to challenge them intellectually and emotionally. They want someone who will be their equal.

A Sagittarius man wants a woman by his side who is confident and outgoing. He wants someone who will be able to handle all social situations, someone who will know how to fight for himself and who will always say what he thinks, no matter what.

If you are smart and beautiful, and confident and fun to be around, then you are all he has ever wanted.

Capricorn men like to make those around them happy. They love to give gifts to loved ones and take the people they care about to restaurants or trips.

They simply take pleasure in making those around them happy and satisfied.

They want a woman by their side who they can completely trust. They want her to be a lover and a best friend at the same time.

They want someone to confide in, someone to talk to. They want a person who will always tell them the truth, even when it hurts.

A Capricorn man finds the most desirable thing in a woman is her honesty and humor.

So, the positive side is that if you want to impress a Capricorn, you can tell jokes and you can laugh heartily. Capricorns love to laugh a lot.

Plus, a Capricorn never feels like rushing anything. He prefers to be fairly careful because he’s been hurt too many times. If you force things to move too fast, you could probably lose it.

Men born under the sign of Aquarius are generally very determined and independent. They are full of ideas and they have everything it takes to make them come true.

They never give up and always strive to improve and do better.

The lovely thing he finds in a woman is her independence and the fact that she knows how to stand up for herself and speak for herself.

He wants to be left alone, so that he can continue living in his perfect little dream world without having to worry about being hurt.

Finishing up injured is the biggest problem a Pisces man can face.

He’s very connected with his emotions and if you do anything that could cause him harm, he won’t hesitate for a second to cross you off his list.

So, a Pisces man finds the most attractive things about a woman are her reliability and loyalty.