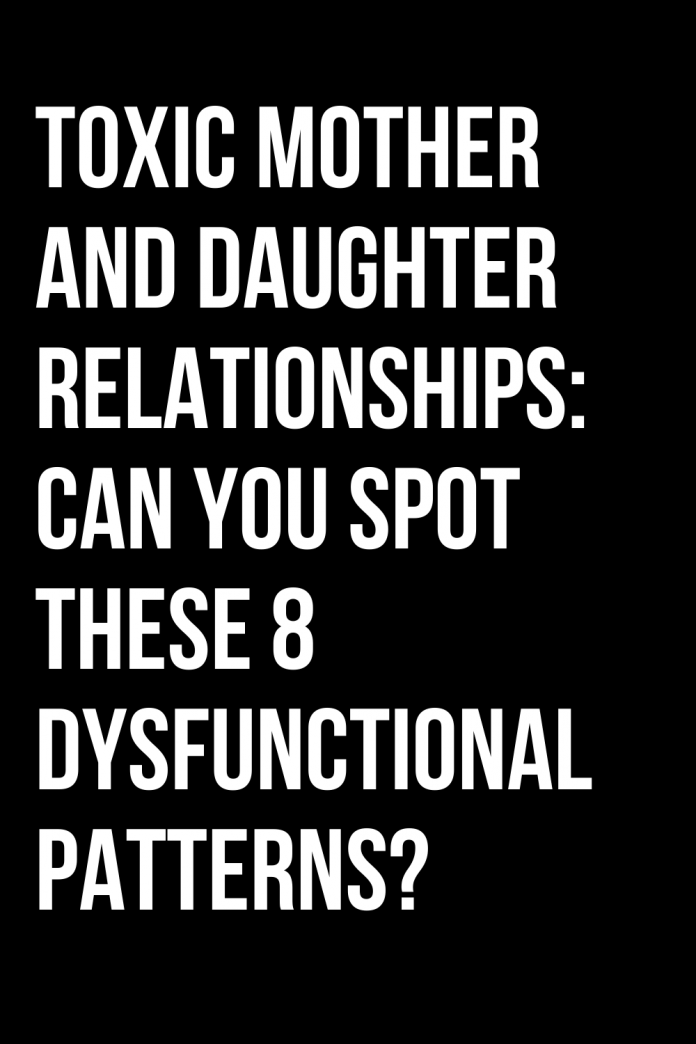 Toxic Mother And Daughter Relationships: Can You Spot These 8 Dysfunctional Patterns?

Our mothers play the role of the main source of care and comfort. Girls in particular identify more with their mothers and look up to them as role models. While some of us get lucky in this area, others end up in toxic mother-daughter relationships.

For a girl, the bond with her mother is the linchpin of her personal development, and she will tend to shape and evaluate all of her future adult relationships based on the mother-daughter relationship she had during her formative years. The research shows that the influence of the mother is very strong on the mental health of the daughter.

What are toxic mother-daughter relationships?

Let’s look at some signs that the mother-daughter relationship is toxic.

What are the causes of toxic mother-daughter relationships?

There are different views on what contributes to toxic mother-daughter relationships. Mothers and daughters who have freed themselves in a dysfunctional relationship often blame personality traits and hormone fluctuations. A more scientific approach, however, says that socio-cultural and cross-generational influences such as gender prejudice, patriarchy, etc. prevent women from achieving their goals in life. Women who are not satisfied with their lives tend to sow the seeds of self-hatred and resentment in their daughters.

What are the Different Types of Toxic Mother-Daughter Relationships?

In this type of relationship, the mother makes an all-consuming bond with her daughter. Both share everything with the other and there is no healthy line between the two. This can look like a happy relationship, but as soon as the girl grows up and demands her own personal space, the problems begin. The mother refuses to withhold her influence on her daughter’s life and continues to interfere in her personal decisions. Daughters are rarely disciplined by such mothers as they grow up. The negative effects of maternal entanglement have also been noted by researchers.

A narcissistic mother sees her daughter only as an extension of herself. She has unrealistic expectations and punishes her daughter if she cannot find them. Such toxic mothers perceive every achievement and failure of their daughter as a reflection of themselves. She severely criticizes her daughter and makes her feel low in self-worth. Research has found that narcissistic parenting affects a child’s wellbeing.

That is the case when the mother sees her daughter as a rival. She feels threatened by the daughter’s looks or performance and may try to sabotage her life. She often draws parallels between her own life choices and those of her daughter and feels inadequate compared to her daughter. Daughters in such toxic mother-daughter relationships grow up feeling guilty or ashamed of their accomplishments, and this degrades their self-esteem.

When a mother flips the script and becomes the recipient instead of caring for her daughter, it creates a very toxic mother-daughter relationship dynamic. Often the mothers get rid of their addiction or are psychologically unable to look after themselves, let alone for their child. Such daughters start looking after their mothers at a young age and can barely take care of their studies or other tasks. Needless to say, this affects the daughter’s life in more ways than one.

Sometimes a dysfunctional mother is emotionally and/or physically unavailable to her daughter. When she is physically present, she can completely ignore the daughter’s presence and not attend to her needs. The mother may also spend most of the time at work or with her friends. In other cases, such toxic mother-daughter relationships end with the daughter being completely abandoned. The mother can run away and leave her daughter with the other parent or with someone else, with serious consequences for the daughter’s physical safety and mental health.

Daughters depend primarily on their mothers for acceptance and validation. A child wants their mother to recognize their emotional and physical needs. But a toxic mother will not be able to look beyond her own insecurities and needs. Such a mother will not accept the authentic personality of her daughter and will dismiss any request or complaint that her daughter makes to her. This dismissive attitude is fatal for the daughter.

A combative mother-daughter relationship can be physical or emotional in nature. Yet the fights and arguments, whether physical or not, leave a scar on both of them. In such toxic mother-daughter relationships, the mother opposes any decision her daughter makes. The two quarrel over every little thing, from quarrels to physical violence. This leads to a very unhealthy life situation for mother and daughter.

Sometimes the mother is unpredictable or unreliable in her parenting style. The daughter does not know which side of her mother will emerge in a given situation. In public or in the presence of others, the toxic mother usually appears caring and supportive, while in private she is abusive or critical. This unpredictable and unreliable nature of the mother sends the daughter on an emotional downward spiral.

Now let’s look at some of the effects of toxic mother-daughter relationships on the daughter:

How do you deal with the effects of toxic mother-daughter relationships?

The research shows that the mental health of mothers has a significant impact on their children. Therefore, in order to lead a functioning life, you need to heal the toxic maternal behaviors.

Talk to your mom openly and honestly and tell her how she hurt you with her toxic behavior when you were growing up. Listen to her part of the story, let her understand your point of view, and solve your problems if possible.

As a child, it was undoubtedly impossible for you to adhere to boundaries, but as an adult, you can set strict boundaries and prohibit your mother from influencing your life with her unhealthy behavior.

Find out which areas of your life are influenced by the toxic mother-daughter relationship dynamics and which toxic properties you have internalized. Take responsibility for your life and change your self-sabotaging tendencies.

Know when the situation can no longer be saved and completely disconnect from your toxic mother. You have the right to end a toxic association, and your safety and mental health should come first. When the relationship is beyond healing, distancing is the only solution.

To be made for one another, with whom one has to reckon