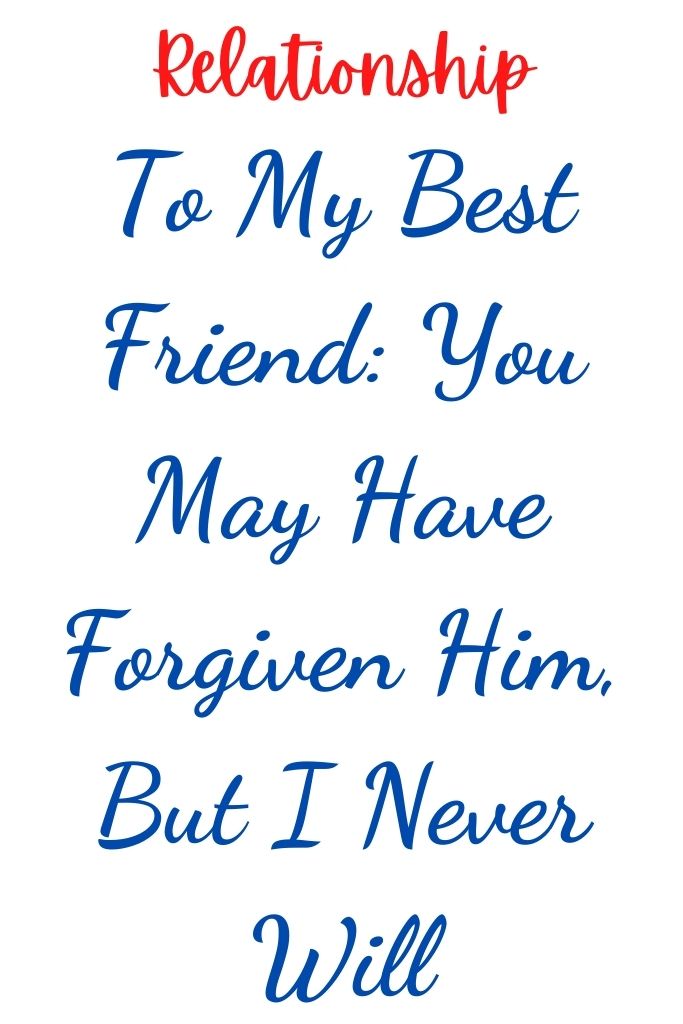 “I forgave him for the sake of my own peace, not to ease his conscience .”

Those were your exact words when you told me that you had forgiven him, and you know what, you may have, but I never, EVER will, no matter how silly that seems.

I will never forgive him for all those tears that you cried and all those sleepless nights he caused. In fact, I will not forgive him a single tear, let alone those rivers that you spilled because of him.

He should have known better than to make you feel so vulnerable and unworthy.

I remember how happy you were when you met him, but I remember even better how that happiness evaporated with each day you were with him.

I won’t forgive him for destroying the child inside you, for making that pure little girl grow up in such a cruel way that you forgot that she had ever even been there.

My dear friend, I look at you now and admire you for your strength to forgive him. I admire you, because you are doing something that I can’t even imagine doing.

Every piece of me screams in pain when I remember that night when you came to me, desperate over another heartbreak he was putting you through.

You were so fragile, so gentle. I wish I had been able to stop your pain, but I couldn’t.

I am still so furious, so angry at him, and all I can see when I come across him is you crying on my bathroom floor in the middle of the night.

You didn’t deserve that kind of treatment – no one does.

I do NOT forgive him for making you into this silent person who is afraid to voice her opinion, and who is now so uncomfortable with herself.

He didn’t just break your heart, he shattered it in a way that will always leave a mark.

I remember you before him.

I remember the joyful girl who loved life, believed in herself, and wouldn’t let anyone tell her what to do.

Because I remember, I will never forgive him for creating the insecure girl who chose her words carefully so they didn’t sound wrong to him.

He never appreciated you the way he should have. Being around him turned you into this insecure person who only saw her flaws and never her virtues. Well, actually, the flaws he told you that you had.

I will never forgive him for making you think you didn’t deserve better back then, and carving that opinion so deep into your mind that you still don’t.

The only truth is HE DIDN’T DESERVE YOU. Or any other good-hearted, sincere girl.

I always knew you were too good for him, and he knew that as well. To this day I’m certain that he did all those things to you just to make you feel as miserable as he was.

He is insecure, has a low opinion of himself, and he wanted you to feel the same way and bring you down with him.

Maybe he thought that it would make him feel better, and maybe it even did, but I will never forgive him for that. He shouldn’t have used you to boost his ego.

I watched you become smaller and smaller every single day, for years.

I hate myself for not being able to get you out of that painful cycle of destruction, and I can’t forgive him for making you think you didn’t need or deserve help.

He wasn’t a good person, he still isn’t. I know you are – too good actually – and that’s why you have forgiven him. I can’t. Not now, not ever. Maybe that makes me a bad person, but I’m fine with that.

People say that we forgive because we need it, in order to move on. That might be true, but I also know my truth. And yours. The truth that hurts so bad, the pain so sharp, that it’s unforgivable.

I’m grateful for you being able to forgive, that was your healing path to recovery.

Still, I’ll always be here to make sure you never let anyone else break you.