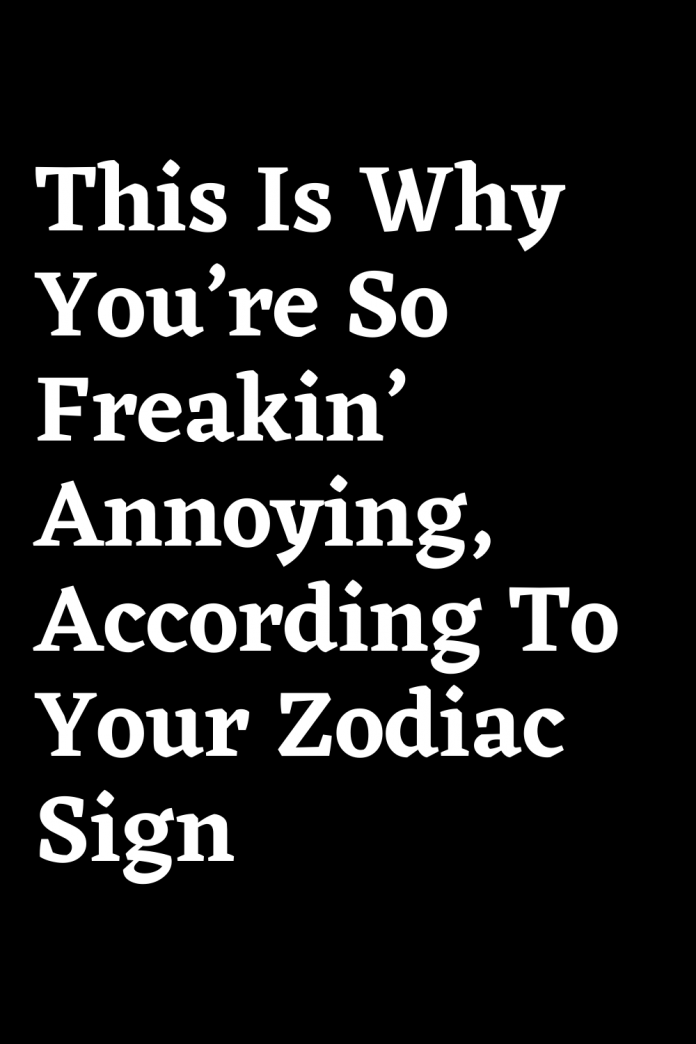 You don’t have to run others over because there is no one standing in your way to success but you.

You’re really stubborn, and you always want to do things your way. You won’t listen to anyone because you know you’re right. You’re not a team player, and others around you know it, so they never rely on you helping them.

When you don’t get what you want, you act like a child. You’re so self-centered that people don’t even want to talk with you because you always manage to stir the conversation back to the topic of yourself.

You’re just as stubborn as hell. You wouldn’t change your beliefs or listen to someone else’s even if your life depends on it. You think that your way is the only way.

Well, I hate to break it to you, Taurus, but you’re not always right. Stop imposing your ideas on others and for a change listen to what other people have to say. Listen to their attitudes and ideas because they are good, maybe even better than your.

You can easily be stuck in a rut because you get too comfortable, and you always repeat the same things all over again. Do something different for a change. Shake things up a bit.

You never admit that you did something wrong, and you’re being stubborn about it. This makes people roll their eyes at you behind your back. And of course, you’d never apologize. But you know what? It wouldn’t hurt you to try.

You talk too much. You just don’t know when to shut up, and you never listen. You can go on and on about one topic, and then just without any introduction, jump to the next one. You could do this for hours.

And you never let anyone weigh into the conversation. It all has to be about you. Frankly, Gemini, this is annoying as hell.

You love going out, but you need to take it down a couple of notches. When your friends don’t feel like partying, take the cue and leave them alone.

There is another serious problem you have, another quality that people hate. Your personality is all over the place, but that is not the problem. The problem is you need to know everything about everyone.

You can’t keep your mouth shut, so you ask around about your friends and what is going on in their lives which turns out as if you’re talking behind their backs. I know you don’t want to be that type of person, but others perceive that kind of behavior as annoying.

I’m sorry because there is no better way of saying this, but you let your emotions take the best of you.

You whine about every little thing. When something is not going the way you want it, you act like a little baby. And if during the day nothing happened, then you’ll mope around, thinking about your ex. Get over him already!

People have to be so careful around you. They have to watch out not to hurt your feelings. You’re incredibly moody. One minute you’re over the moon, and then just a word can set you back to being depressed.

You don’t want anyone to see how emotional you are, and then you try to hide it. Those who are the closest to you are sick of looking at you pretending to be tough. Be who you are and be proud of it.

It’s all about you. You are the most important person around! Well, guess what?! It’s freakin’ annoying to be around someone like you!

You want to be in the center of attention, and it drives people around you crazy. What they don’t know is that you put on this facade because you don’t want anyone to see how insecure and emotional you really are.

Stop being a show-off because people hate that. Don’t be a drama queen if something hasn’t turned out the way you want it. Face the reality, and don’t pretend you’re above everyone.

The perfectionist side of you is the most bothersome thing about you. It’s impossible to meet your needs and to please you.

You find a flaw in everything and everyone. You’re too picky, and you pay too much attention to details. That’s what annoys people the most. Nobody’s perfect Virgo—neither are you.

You tend to criticize people a lot because you are sure that you can always do something better than someone else. People get pissed off because of that.

You want to calculate every next move you make. Everything is carefully planned. And if something is not to your satisfaction, you make a fuss.

You’re indecisive, and when you fall in love, you stop seeing yourself as a unit, and you look at the both of you. You become codependent, and you do every single thing with your partner. You simply lose your sense of worth.

People around you who care about you can’t stand it. You devote all of your time to your relationship. On the one hand, being committed to relationships is not such a bad idea, but it can destroy you in the meantime.

You ask for other people’s opinions, but you never take their advice. Stop doing that! If you need advice, then use it. Don’t go on and do your thing anyway.

You don’t like to be alone. Okay, no one does, but others don’t develop an unhealthy attachment to another person just to avoid being alone.

You never get in the middle of the fight, and you never pick sides because you don’t want to upset anyone. Clearly, you have an opinion, use it! Don’t just stand around there.

You’re a master manipulator. When you want something, you have no problem using others and manipulating them into making your wishes come true.

You’ve used s’ as a weapon of getting something you want before. Sometimes you’re a true vengeful bitch.

You’ll do pretty much anything to get back to someone who has messed with you or hurt you in any way. You never let go of things, and you can hold a grudge for so long.

You want people to be honest with you, but you’re the first one who doesn’t meet her own standards. Sometimes you lie to get what you want and almost always you hide things about you which you don’t want other people to know.

And you expect them to tell you everything. Well, isn’t that just selfish??

You always correct others which makes people around you insecure. They won’t even start a conversation with you because they know you’ll have something to say right at the start. And you’ll probably think that you say it better.

Revenge is something you enjoy. it’s like you’re just waiting for people to cross you, so you can get back at them.

You’re funny; that’s a fact. But sometimes you just don’t know when to stop. There are some situations in which you just have to keep your mouth shut or if you can’t do that, then leave.

Not everyone gets your humor, and you should respect that. People who don’t get it find you annoying, and sometimes people who get it act the same way. Don’t cross the line from funny to obnoxious.

You’re all about the trends, and you follow them blindly. One day you’re going to be into one thing convincing your friends that it’s the next best thing, and the next day you’ll love something else completely and do the same thing.

People get annoyed by you because you think your view is the only correct one. You don’t accept other people’s remarks, and you keep on doing your own thing. People would like to be listened to. You’re not doing it. You’re annoying.

You’re goal-oriented, and when you want something, you’ll stop at no costs. You’re annoying because you simply refuse to take a break. You’re working all the time, and you hardly ever smile.

This leaves an impression of a cold and distant bitch. That’s what people think of you when they see you.

You annoy people because you always think you’re right. Usually, you are, but that is not the case every single time. And of course, you won’t admit it when you’re wrong, even if you are aware of that.

You really care a lot about your reputation and how people perceive you. You won’t let anything destroy your image which means that you are not always acting your true self. You’re pretending to be something you’re not, just for the sake of a good reputation.

You’re so focused on yourself and your own success that you don’t see when someone close to you needs you.

You look like you don’t care about anything or anyone. You seem cold and indifferent, and people have a hard time connecting to you.

You let logic rule you, and there is no place for emotions in your life. People are annoyed because they have a feeling they are talking to a robot instead of a human being.

You want to be different from anyone else, and sometimes you take things too far just to stand out from the crowd. People hate wannabes.

You’re just one, big, hot mess. People are tired of picking up after you. You’re an emotional wreck, and you don’t know how to handle it.

Despite that you’re one big mess yourself, you go on and try to help people who also messy but not as messy as you. If you haven’t put your life in order, how the hell you think you’ll be able to help anyone else?

You need to stop living in the clouds and being so damn impractical. Remember things because other are tired of constantly reminding you to do everyday mundane things like washing your clothes.

Sometimes you just cut off the world and act like you’re not even present. That is freakin’ annoying. Stop living in your dream world, and come down to Earth where things are actually happening.