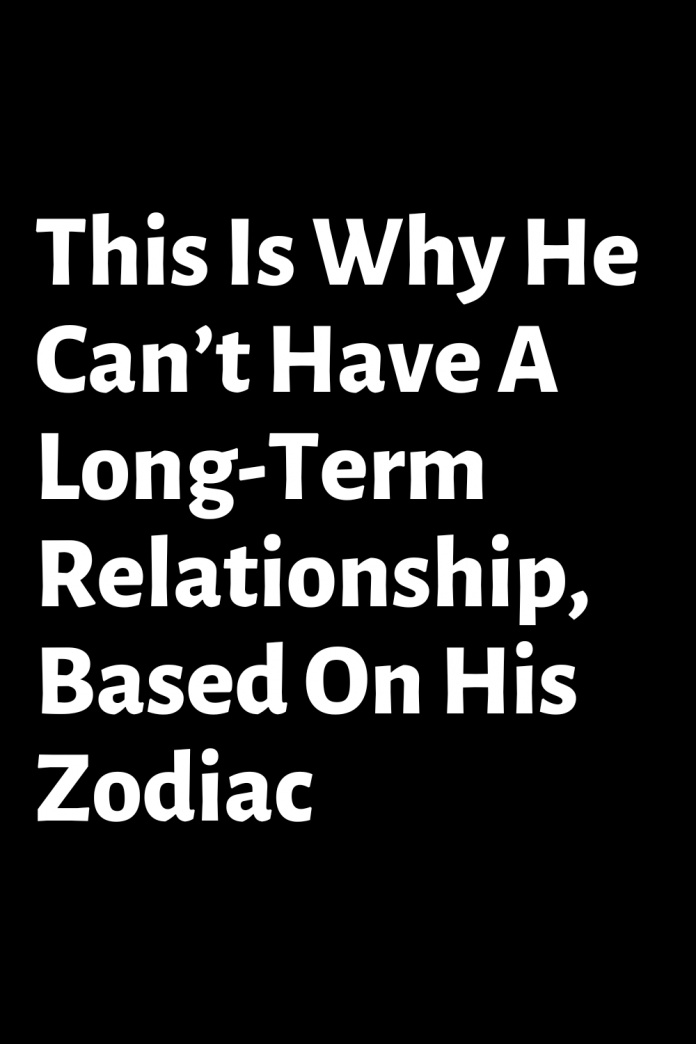 What is the thing that prevents him from maintaining a long-lasting relationship? What is stopping him from remaining in a stable romantic relationship?

If the man of your interest is an Aries, the only thing that moves him is the chase and the excitement at the beginning of a relationship.

However, as soon as all of that fades away, he becomes tired and he moves on to his next victim.

Naturally, these personality traits make it impossible for this man to have a stable, lasting relationship.

The thing that prevents a Taurus from having a long-term relationship is his inability to compromise.

This man is rarely ready to meet halfway, let alone change his attitudes.

Therefore, it is practically impossible for him to find a woman who should be submissive to him in almost everything for their relationship to work out.

What makes it impossible for a Gemini to sustain a real relationship is his flirting habits.

This doesn’t mean that he will necessarily cheat on his partner but this guy’s problem is that he needs to be at the center of attention when surrounded by the opposite gendor.

He simply has to see that he is liked and desired, which often causes a lot of trouble in his relationship.

A Cancer’s problem is usually the emotional baggage that’s been weighing him down.

He has trouble getting over some of the emotional traumas from his past which makes it impossible for him to completely devote to anyone new.

Leo’s ego is the thing that doesn’t allow him to have a healthy relationship.

This guy always considers himself above his partner and maintaining a relationship under these terms is impossible.

On the other hand, if he finds someone with the same problem, the power struggle eventually destroys the relationship.

A Virgo man can’t have a long-term relationship because deep down, he thinks nobody is good enough for him.

Knowing what you want is one thing but being too picky and concentrated on your significant other’s flaws all the time is something completely different.

When you first meet a man who refuses to argue, you think of it as a true blessing.

However, with time, you notice that this man is actually not capable of having a long-term relationship.

This is exactly what the problem with a Libran man is—he avoids confrontation to the point that it becomes impossible to work on a relationship.

Scorpio’s insane jealousy is the thing that prevents him from maintaining a healthy, long-lasting relationship.

He assumes that no woman could ever be completely loyal to him and that fear brings him nothing but trouble.

In fact, it makes most of his relationships fail before becoming serious.

Sags are commitment-phobes and that is the reason why they can’t have a stable, long-lasting relationship.

As soon as this dude sees that he is becoming a part of a couple, he becomes terrified of losing his individuality and that is something that causes him to run for his life.

Consequently, this fear makes it impossible for this guy to maintain a relationship for a long period of time.

A Capricorn’s biggest problem when it comes to long-term relationships is the fact that he doesn’t have the same level of emotional needs as his partner.

Besides never having enough time or energy for his girlfriend or wife, he always treats her like a second choice as well.

Of course, this is something nobody is willing to put up with for a long period of time.

Even when an Aquarian has deep feelings for his partner, he has trouble showing it.

The problem with Pisces is that they expect too much. He idealizes his partner and wants a fairy tale.

However, once he faces the everyday reality, he gets disappointed and leaves, in search of another woman who might make his dreams come true.