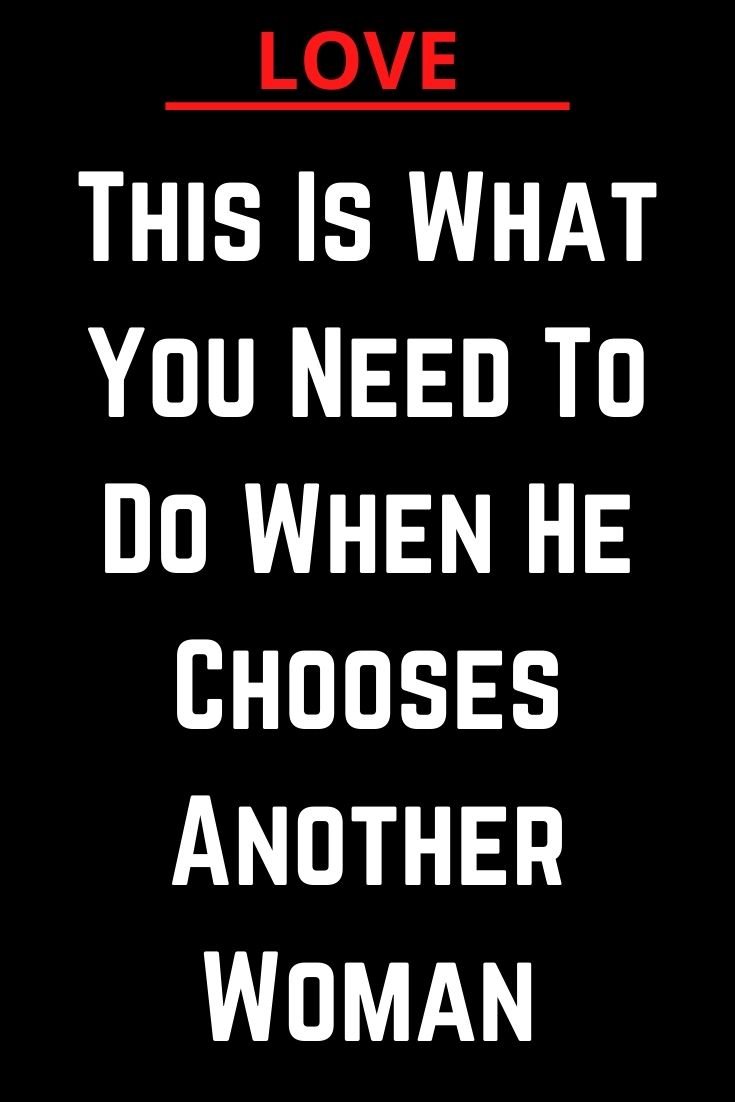 There you were, at the top of your life, fully alive. You were in love and you thought that nothing could break you apart, right?

There was never any need for jealousy, because jealousy is a sign of insecurity and you were so confident that no one could ever break the love you felt for yourself.

But somehow, your love for him was stronger. It was mesmerizing and wonderful.

Until he chose another woman.

This is the point where you start asking questions like: Was I ever good enough? Am I worthless?

Is she better than I am? Why? But you won’t get the answers to these questions because none of these things matter anymore—he’s gone and you need to move on.

When he chooses another woman, you have the full freedom to cry. Cry it out. You will feel much better afterward, when you know that you haven’t been holding it inside you for too long.

Just make sure that he doesn’t see your tears. He isn’t worthy of looking at those wonderful, sparkly eyes ever again and he doesn’t deserve to know that he inflicted pain on the only woman who wanted to make him happy.

When he chooses another woman, forgive yourself. It’s not your fault.

I know that it’s hard to believe that it wasn’t something you did that drove him away but rather that he wasn’t the right man for you.

He wasn’t worthy of you in the first place, so why do you need to take the blame for it? Don’t. Forgive yourself, if you have anything to forgive.

When he chooses another woman, forgive him. He probably didn’t know better than this.

He didn’t realize what he was losing at that particular moment when he chose her and even if he did, holding grudges would be pointless.

I once read that being angry at someone is like drinking poison but expecting the other person to die.

When he chooses another woman, love yourself. You need to love always yourself but this is the time when you need it the most.

Love yourself unconditionally and don’t depend on other people to love you.

You don’t need a man in your life to feel loved and appreciated, you only need yourself. You really are your own hero in these situations.

When he chooses another woman, don’t blame her. Love doesn’t choose its victims, love just loves. If those two fell in love then holding grudges against her won’t help you heal.

In this case, they’re better off together because you finally know who the people you can count on are and who the people who will stab you in the back when they see the opportunity are.

When he chooses another woman, focus on yourself. Focus on your dreams and everything that goes with it.

I know that it might seem like you’re running away from reality but you’re actually creating a new one.

You are creating a life that you are happy to live. Go travel, meet new people, finish that project. You are a strong and independent woman. Go embrace it!

When he chooses another woman, don’t get even. The best revenge is to move on.

He will only see that you still care too much about him and he doesn’t deserve to see you angry because of him.

Give him the cold shoulder and move on. You will feel at peace afterward.

When he chooses another woman, let go. Let go of everything that doesn’t serve you anymore.

Keep the good memories and the lessons you’ve learned because they will make you stronger but you don’t have to hold on to him and the feelings you had.

Let go and be free of everything that happened. You will be doing yourself a massive favor.

Don’t dwell and don’t fall apart again. He chose her and that was his decision. You have nothing to do with it.

You are lovable and you are worthy of love and appreciation, it’s just that he wasn’t able to give you what you deserved.