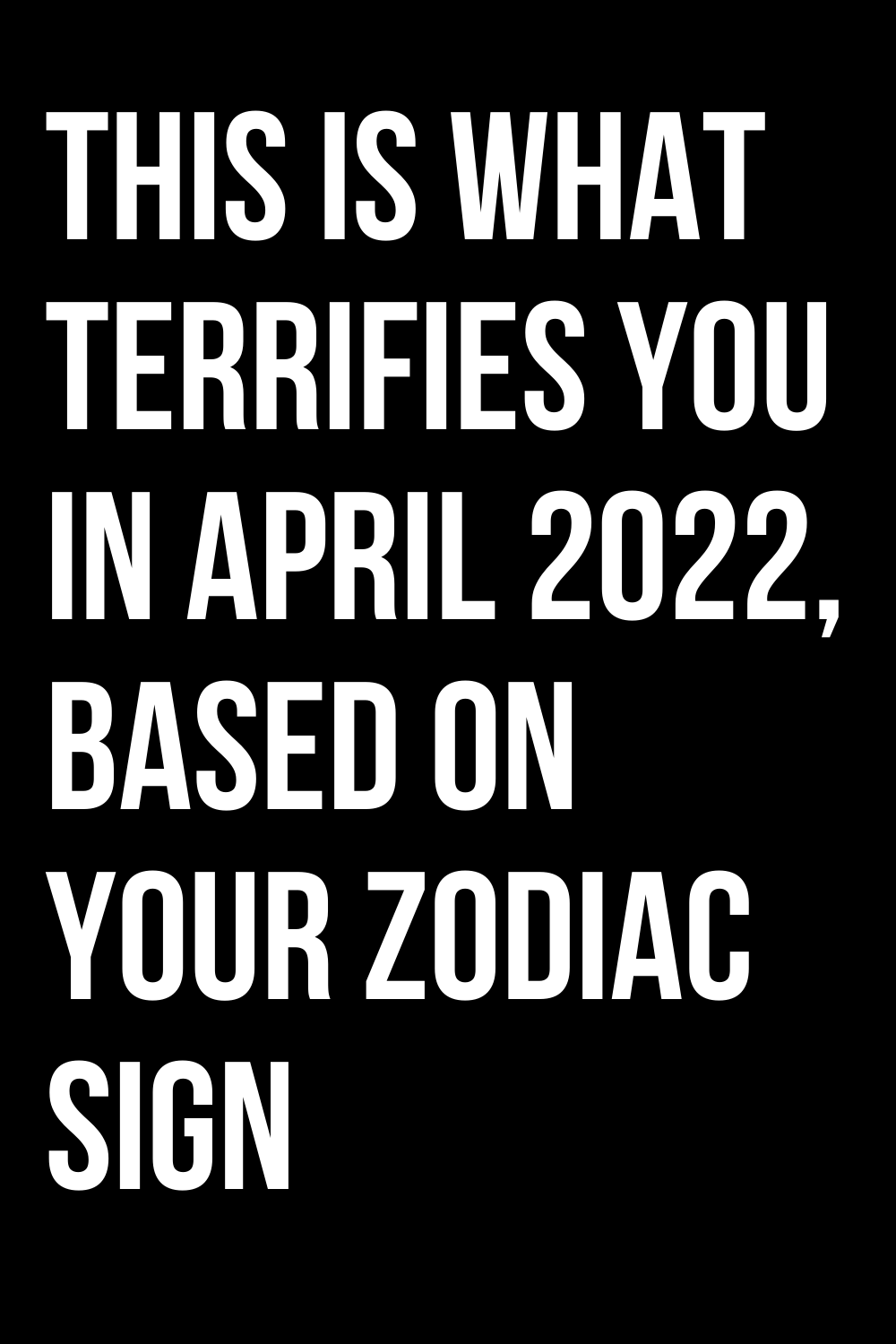 This Is What Terrifies You in April 2022, Based on Your Zodiac Sign

You’re one stubborn person, and you and everyone you know are fully aware of it. Though you come off as a carefree, tough exterior kind of person, underneath is the terrifying thought that your brash attitude and hard-headedness will drive you away from the people you care about in your life and that you’ll lose out on ever keeping them in your life. It’s enough to scare you to death if you let it.

You aren’t terrified of all change, but too much of it at one time is enough to set you on edge. Whether it’s relationally, financially, or professionally, you are sure to have an internal meltdown if things surrounding you feel unstable or change too much in a short time. It’s the kind of thing your nightmares are made of.

Not being able to express their true selves

You are as expressive as they come, and you love to dazzle people with your knowledge and skills in what seems to be every arena there is. Yet if you are placed in an environment that restricts you from being yourself to the fullest extent, or worse, an environment that causes you to believe you aren’t nearly as impressive as you thought you were, nothing could terrify you more than the possibility even remotely becoming a reality.

Being rejected and ending up alone

No one loves to be in love as much as you do, and your hopeless romantic spirit is something to cherish. Yet we all know that as much as we’d love our happy ending, riding off into the sunset with our one true love, this isn’t always the reality we end up with. Sometimes you allow your thoughts to wander over the idea that the person you’re infatuated with will reject you if you put yourself out there, and that you’ll eventually end up alone for the rest of your life. Even just the idea is enough to break your heart AND scare the hell out of you.

Everyone loves you, and you love that they do. You’re as fearless and lovely as they come, so why wouldn’t people notice you? However, the terrifying thought that creeps up in the back of your mind sometimes is that your talents and attempts to entertain will go completely unnoticed. You worry that even if you disappeared from the spotlight, no one would care or even notice, and it’s enough to send you in a spiral if you dwell on it too long.

Not having control of their lives/thoughts/anything really

Most people would say that, realistically, you can’t have control over everything in your life. But you might be able to get them to take it back if they followed you around for a day. Sometimes everything in your life seems to do exactly what you plan for it too. However, the thing that terrifies you regularly is the fear of not having control or losing it altogether. You like structure, and you know what’s best for yourself, so not being able to control your thoughts, feelings, or life, in general, is what your nightmares are made of.

Being backstabbed by someone they care about

You aren’t one to go back on your word once you’ve committed to something, and you hold your friends and partners to the same standard. So it’s understandable that one thing that terrifies you is someone completely betraying you, regardless of the reason. You wouldn’t dream of doing anything like that to someone you care for, and the possibility of anyone doing that to you is enough to cause all sorts of panic inside your mind.

On the surface, you are very calm, cool, and collected. You like to give off the vibe that you don’t need anybody, but you know it’s just a front. You have such a wellspring of love and compassion under the surface, though very few people ever get to see it. The moment people start getting too close and cause you to want to open up, it’s enough to set you on edge, and your reflex is to run as quickly as you can in the opposite direction. Vulnerability doesn’t just make you uncomfortable, it’s what sends chills running down your spine.

It seems the world is continuously calling your name to explore and see all it has to offer, something you’re more than happy to do. The thing that terrifies you is being restricted and not having the freedom to explore and do the things you want to do, on your terms. The thought of you being put in that kind of situation honestly makes your skin crawl.

It’s hard to picture you not succeeding in what you do, especially considering how hard you work. Yet that is the exact thing that worries you constantly—that you’re going to fail, regardless of your best efforts to succeed. The idea that you could work harder than anyone, invest more time and resources, and still end up a failure? It’s a wonder you ever get any sleep at night.

Being forced to live a conventional life

While some may worry that their lives will be thrown off kilter by change and abnormal situations, you worry about quite the opposite. You’re certainly one to march to the beat of a different drum, and that’s just the way you like it. Yet if you ever were forced to live what most would consider a “normal” or “conventional” life? Shivers go down your spine just reading that sentence.

You’re a sensitive soul, and it’s something many people appreciate about you. You would go out of your way to help anyone who asked for it, whether it’s a helping hand, an ear to listen, or a shoulder to cry on. Yet the thing that terrifies you is someone not only critiquing your efforts to help but doing so bluntly or harshly that doesn’t even take a moment to spare your feelings. You would rather avoid confrontation at any cost because even the scenarios that run through your mind are enough to scare you speechless, much less dealing with the real thing.