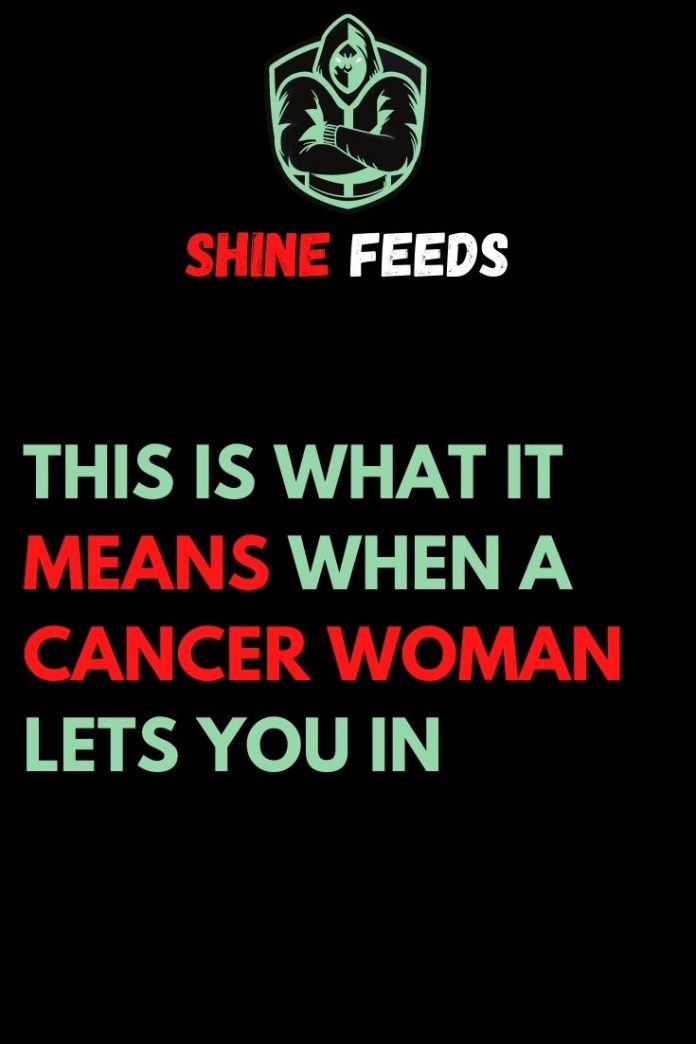 When a Cancer woman lets you in, she will shower you with warmth and love. You’ll be at the center of her heart and the forefront of her every thought at night. She will see you and see no one else. She will do all that she can to make you feel like the most loved man in the world. She will care for you, protect you, cherish you, listen to you, notice the little things you do you aren’t even aware of, and she will love you for that. She will always be curious about you and think back to the stories you’ve shared with her. She will treasure moments you might have long forgotten about and the little items you don’t even remember giving her. There’s always a reason behind the “Hi” she texts, a meaning in the songs she sends, thought in every action she takes concerning you.

When a Cancer woman lets you in, you’re in.

There’s no blurry line, no need for guessing. You will never have to question where you stand with her. You will know it in the adoring way she looks at you, in the slightly higher-pitched voice she uses only when speaking to you, in the genuine laughter that she always has to hold back a little just so you won’t see through how much you actually mean to her. Once you’re in, she will want you in for the long, long haul. You’ll be welcomed in her most vulnerable hours, most private thoughts, most painful memories, most naked self, and layers of emotional depth which would surprise you to know.

It might take you some time to get there fully, but every step of the way will be rewarding as she doesn’t treat bonding and connection lightly, not even in the slightest.

When a Cancer woman lets her guard down for you, she doesn’t actually have a backup plan. She knows how to shield herself from toxic situations, but it doesn’t mean her heart will stop looking for you the moment she’s hurting. There’s always a soft spot buried somewhere, a little bit of fire that can never be extinguished. So, she can only hope that she means something to you too. That you understand how hard and rare it is for her to let someone in, how much care and affection are actually boiling behind her thick, hard shell, and how devoted she becomes once her soul is touched. She doesn’t consider this a choice but accepts it as part of her nature, of the way she’s made. She loves wildly, passionately, whole-heartedly, sometimes perhaps foolishly. She gives everything away without keeping much for herself.

Her feelings run deep, and she doesn’t give up easily. Well, she might never give up at all.

When a Cancer woman lets you go, it’s because she has to. It’s because she believes it would do you best. It’s likely she will come across as fierce and difficult, she will say things that sound so extreme as though she already crossed your face off the planet Earth. But it’s only to cover up the overwhelming pain she bears, the tears she sheds when you’re not looking. It’s just her defense mechanism. Her finding the strength to face reality without you and the likelihood that in this long, daunting life she will never have you again.

When she lets you go, she won’t do anything to hold you back. She will lock away her dreams and stay put in her shell as told. She will show the world she’s strong and well-put-together while silently mourning over the loss of you for what seems like an eternity. She will remember you, your light, your tears, your hope, your essence. She will always have her arms stretched out ready to feel you again no matter how hard she might, at the same time, push you away.

When a Cancer woman lets you in, she sees the sun and moon in you that lives in her too. She feels you, understands you, empathizes with you. She can anticipate your reactions to her naturally emotion-driven behaviors, and she knows it’s only possible because your two souls are tightly connected, which she finds incredibly precious. Even when she has to let you go, a part of her will always think fondly of you, watch out for you, be tolerant towards you, send you all her blessings.

See, she isn’t scared of pain, of loneliness, of being a fool — It’s all okay. She is only scared of being unable to feel, but you have shown her the exact opposite. If you and with you, she has found herself, her anchor, and for this, she’s grateful. She wouldn’t trade her times with you for anything in the world even if the outcome is dead-end. She would let you in all over again.