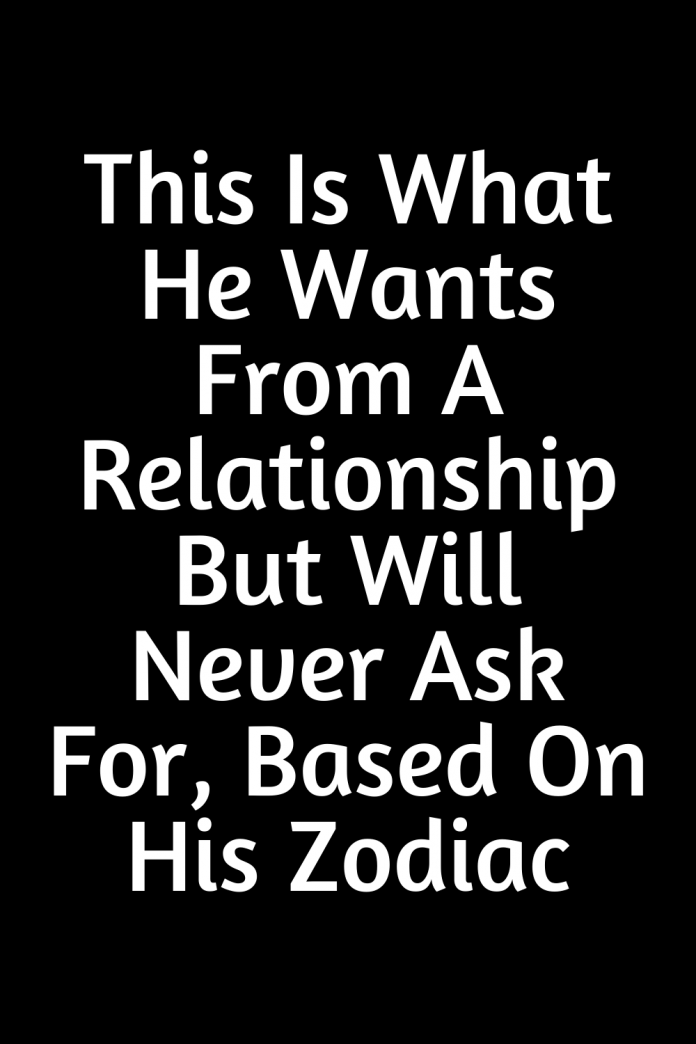 Unlike us women, most men don’t have the ability to verbalize all of their needs and desires.

Instead, they are more likely to stay silent about their cravings, expecting you to read their mind and to always know what they wish for.

That is why we’re here to save you from an unnecessary headache and to tell you exactly what your other half secretly wants from a relationship but will never ask for.

When it comes to this sign, the thing he wants from you is to always continue to challenge and excite him.

He is afraid that your relationship will fall into a rut and that eventually, the two of you will lose your mutual passion and become distant.

Of course, an Arian man will never admit this to his partner because he doesn’t want to be perceived as an immature guy who only loves you while you play with him.

What Taurus wants is a trustworthy partner. He wants to know that he can rely on you at all times.

The truth is that this guy needs you constantly reassuring him that you’re fully committed.

However, he’ll never directly ask you about this because he doesn’t want you to know about his fear of being disappointed or betrayed by his loved one.

If your boyfriend is a Gemini, just make sure you make him laugh all the time and you shouldn’t have to worry about him ever leaving you.

Gemini men have a lot of similarities to little kids—they need to be constantly amused and then they will give you all of their undivided attention.

Even though they’re known to be vulnerable, Cancers will rarely talk to you about their emotions straightforwardly, especially because they’re scared of appearing too needy.

That is exactly why this zodiac needs to find a romantic partner who will put in the effort with understanding the real him and who will try hard to dig down through multiple layers of his sensitive personality.

Nevertheless, you need to be careful—he can’t notice that you’re praising him just because you know it’s what he wants to hear.

This guy has to be certain that you really mean that he is the best man you’ve ever had and that he can’t be compared to anyone else.

When it comes to a Virgo man in a relationship, he is the guy who pays attention to the little details and he expects his partner to do the same.

A Virgo will be enchanted if you surprise him with a small token of your attention which proves that you’ve been listening to him carefully—he’d always rather get a book he randomly mentioned a few weeks ago, for example, than for you to make some huge, typical romantic gesture for him.

A Libran man will never directly ask you to give him more space because he doesn’t want you to interpret it as being unloved or unwanted but trust me—he craves it.

It doesn’t matter how much this guy loves you, he simply can’t invest all of his energy and efforts into your relationship.

Contrary to popular opinion, s_- is not the most important part of a relationship for a Scorpio.

However, the truth is that this guy will enjoy cuddling.

Sometimes, he’d rather skip the action and just spend the night holding you in his arms and creating a deep bond with you.

He just won’t admit it because he wants you to perceive him as a stud.

If the man of your interest is a Sagittarian, he probably wants you to reduce the amount of your jealousy and possessive behavior.

It may appear from your point of view that you aren’t doing anything bad—you don’t nag, you give him enough space and you don’t limit his freedom.

However, a Sagittarian doesn’t need much to feel trapped or suffocated.

The thing your Capricorn man wants from you but will never ask for is for you to dress up more often.

He knows that he can’t tell you something like this straightforwardly because you might think that he doesn’t find you beautiful or attractive enough, which is not the case—he just enjoys it when you look your best.

This guy’s ego is more fragile than you might think.

He is in constant fear that he isn’t man enough and he secretly needs you to allow him to take the lead just to have a chance to prove his masculinity.

Don’t get me wrong—this doesn’t mean that you should act as if you are beneath this guy just to please him.

However, letting him make some decisions just to help him feel better about himself won’t do you any harm.

Pisces wants a fairy tale kind of relationship. He enjoys all of your romantic gestures, including the ones you yourself might consider cheesy.

Remember—this guy is an old soul and he wants an old-fashioned kind of love and that is exactly what you should give him.