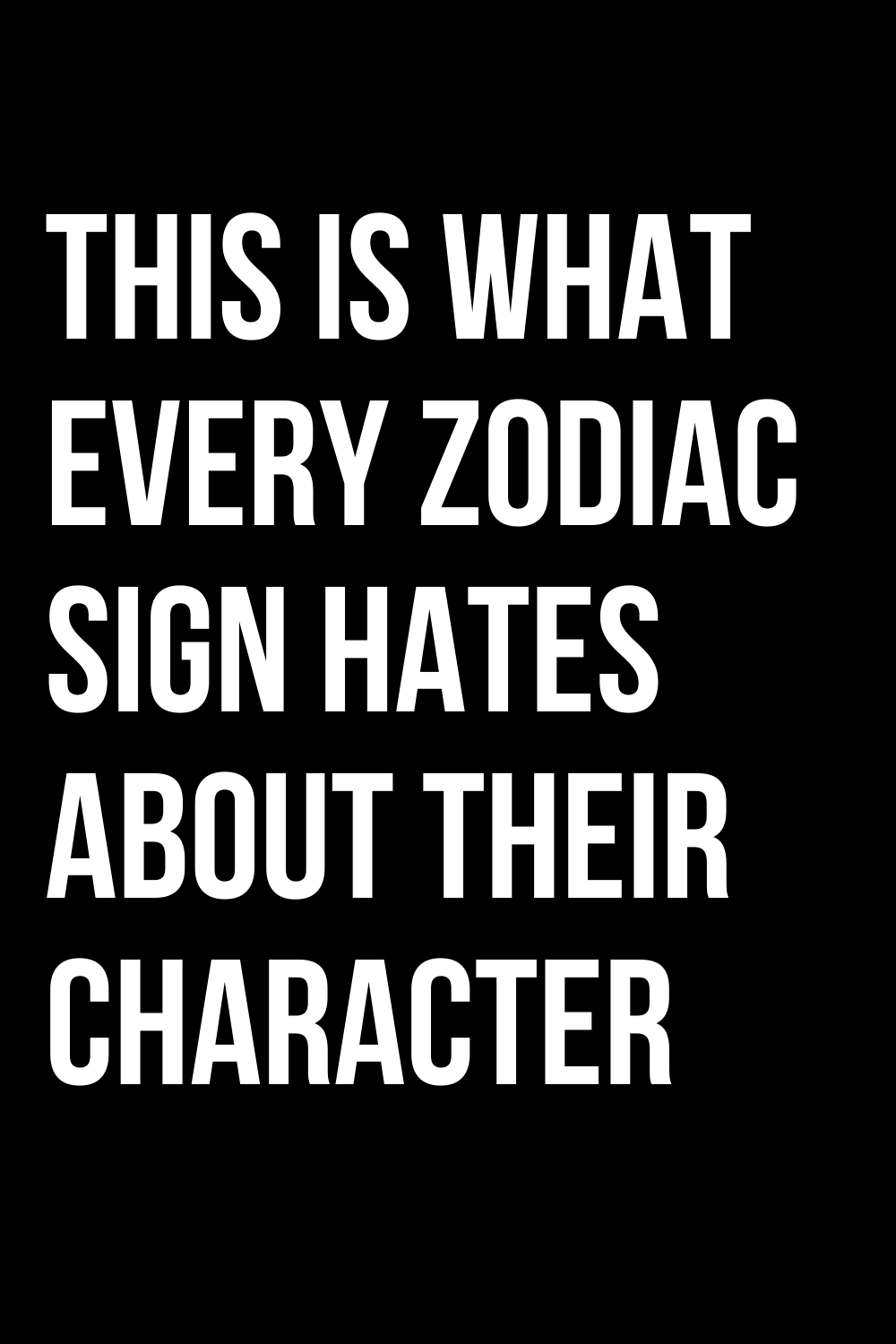 THIS IS WHAT EVERY ZODIAC SIGN HATES ABOUT THEIR CHARACTER

Find out what is the aspect that the various zodiac signs hate about themselves and that, even if they cannot, they would like to change.

Each of us has strengths and weaknesses to live with and regardless of the degree of awareness of them, there are often sides that you just can’t stand and that push you to act differently to change them. If there are aspects that can change over time, others seem printed on the person and this may depend, at least in part, on the influence of the stars. After seeing what is how the various signs of the zodiac react to anxiety and what is type of relationship the various signs hate, today we will try to understand what the various zodiac signs hate about themselves. Since this is something that has to do with emotions, the advice is, as always, to also check the ascendant of the profile that you want to control.

Horoscope: the aspect that every zodiac sign cannot bear of itself

Aries – Impulsivity
What people born under the sign of Aries hate most about themselves is their impulsiveness. When it takes over, they find themselves acting almost without thinking, saying, and doing things of which sooner or later they always end up repenting. Although they are aware of it, however, they are not able at all to put aside this way of being, feeling almost dominated by it and ending up acting impulsively even against themselves. A problem that only a lot of calm and patience could fix, things that are not exactly typical of the natives of the sign.

Taurus – The constant brooding
The natives of Taurus detest their propensity to think and rethink everything. Whether it’s distant memories, people who are no longer a part of their life, or a lost opportunity forever, their minds will keep going back to whatever they consider leftover, worrying about them and giving them too many things to think about. Even though they commit themselves with all their strength, however, they cannot at all abstract from this way of doing and continue to propose it continuously, sometimes even getting worse with the others. Nonetheless, whether they like it or not, this propensity for reflection is somehow part of their appeal and, for this reason, should be accepted.

Gemini – Indecision
Many people born under the sign of Gemini are fickle people. Aside from their ability to change their mind often, their real problem is that they tend to think too much about decisions to make and all for fear of making mistakes. This leads them, therefore, to be highly indecisive and to learn from one thing to another, constantly oscillating between opposites and everything until they can find some form of solution. They only do this when they don’t know what to do because all other times their ideas are all too clear. For this reason, they shouldn’t worry too much, trying not to worry when a decision doesn’t seem to want to come.

Cancer – Sensitivity
Those born under the sign of Cancer would like to be less sensitive, nevertheless, it would be wrong to say that they hate this aspect because they always have a good opinion of themselves. If they could change something, however, they would make themselves stronger and less prone to the emotions that so often overwhelm them, leaving them unable to act in a normal way. When they suffer from something, in fact, they often lose their lucidity, also becoming “bad” towards others and all for fear of being alone. It is a way of doing things that play against them and that they should probably really change but always without feeling too bad because being sensitive is one of their greatest qualities. What they should commit to doing is being able to channel it better.

Leo – Getting to others in the wrong way
Yes, those born under the sign of Leo cannot hate any aspect of themselves. What they don’t like, then, is how they sometimes get to others. Their wanting to always be at the center of attention often makes them unpopular with those who have their purposes and this can lead to basic misunderstandings or dislikes. Perhaps starting to look for some flaws, assuming that perfection can be very boring, would help them to empathize more with others, thus gaining more sympathies.

Virgo – Too Much Precision
In a world with people who too often tend to be superficial and distracted, those born under the sign of Libra sometimes find themselves wishing to be less precise because so leading them to always be at attention and see mistakes that others make. In reality, their biggest problem is not so much being accurate as always wanting to judge what others are doing. Putting this way of doing aside, the imprecision of others would be completely indifferent to them, which would greatly benefit their mood.

Libra – The need to always be well
Those born under the sign of Libra are aware that they cannot withstand stress very much and that they live very badly with every little problem. It is an aspect of themselves that they detest and think they cannot eliminate. In truth, with a little effort, they could get great results, discovering themselves stronger than they think and acquiring a new self-awareness that would make them more confident and confident in life.

Scorpio – Jealousy
One side that Scorpio natives hate about themselves is the jealousy they feel towards loved ones. We are not only talking about jealousy in the sentimental field but also concerning friends, relatives, and sometimes even acquaintances. If they see that the people they love are in perfect harmony with someone else, they tend to feel bad about being left out. It is an aspect that they know to the point of avoiding showing it and that in some ways they even know how to manage, at least until they realize that what they feel is their problem. If on the other hand they are given reason to be jealous things change and their combative character risks taking over.

Sagittarius – Lack of patience
Those born under the sign of Sagittarius are not particularly patient and are well aware of this limit. However, they never manage to deal with it, finding themselves too often having to fight against themselves for the anger and the sense of frustration that this way of being entails. Fortunately, when they are far-sighted enough, they can find a comfortable middle ground through which to express themselves. If caught off guard, however, their way of being will return to take over, leading them to lose their temper and give the worst of themselves. Which they will regret as always, even without admitting it to others but themselves.

Capricorn – Lack of tolerance
The natives of Capricorn are not tolerant people, especially when someone tries to make a complaint to them. Always operational, they assume that what they do is always correct, which is why they can’t stand being told otherwise. Even if they find themselves at the center of some discussion, they tend to get out of it as soon as possible, avoiding confrontation to the point that when it is not possible they end up taking it, inevitably putting themselves in the wrong. A way of doing that they know very well they have but which nevertheless they cannot (or perhaps do not want to) change.

Aquarius – Confidentiality
Yes, those born under the sign of Aquarius, known for their extreme confidentiality, seem not to appreciate this way of being. Although hardly noticeable from the outside, they continually strive to be sociable and to appreciate the time spent in the company. Unfortunately, however, most of the time, what they want is to stay at home and relax, away from the chatter that often doesn’t even involve them. Of course, when they find the right people, mixing with others is easier for them, nevertheless they always feel a sense of discomfort for this way of being which, while recognizing it as difficult to understand, they feel more than anyone else.

Pisces – The Goodness
That Pisces natives are good is a known fact. For them, however, this way of being is not so much a positive aspect as something to be ashamed of. They’re always thinking of others first and going out of their way to make the people they love happy makes them feel too involved and at risk of great disappointment. Which, indeed, often happens to him. After each bitter disappointment, they promise to change but it is really difficult for them to succeed because it is enough for them to see someone in difficulty to retrace their steps, acting as they usually do. A weak point which, even if they don’t always realize it, is also their great strength.