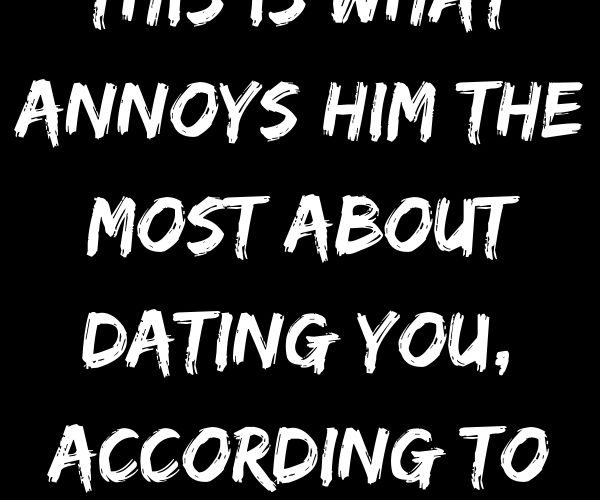 This Is What Annoys Him The Most About Dating You, According To Your Zodiac

No relationship is perfect, and no couple is perfect. When you think about the things that you’d change about your boyfriend, you could come up with a list of things, despite the depth of your love for him.

However, this goes both ways. Whether you like to admit it or not, there are some things that bother your bf about you, as well.

Nothing is ever peaceful or calm with you. You have a habit of making a fuss out of nowhere and after a while, this gets exhausting.

This is exactly what annoys your bf the most–the fact that he always has to be on the lookout and prepared for a fight.

You don’t know the meaning of the word ‘compromise’. You expect everything to always go your way, but that is not how real relationships function.

For once, meet your boyfriend halfway or even better, let him have a saying about something.

What bothers your partner about dating you the most is your habit of talking trash about your exes.

Of course, this makes your current boyfriend worry whether you’d badmouth him as well if you guys broke up.

Remember that these men from your past were a part of your life and you were the one who chose them, so there is no need to talk badly about them.

Let me reveal the bitter truth to you–on most occasions, your boyfriend is actually scared of you overreacting to things.

Sometimes, he even avoids being too honest because he doesn’t know if you can handle the truth.

And that is what annoys him most–having to walk on eggshells around you.

Whenever you and your bf have a fight, you’re never the first one to pick up the phone and contact him.

Instead, you always expect him to make the first move, and after a while, this behavior of yours is making him wonder if you even love him back the same way he loves you.

Your romantic partner doesn’t need a mother, a teacher or an older sister–he needs a girlfriend.

Stop trying to raise this man because that makes him feel like less of a man and might push him away from you.

If you’re a Libra, the thing that annoys your boyfriend most about dating you is your passive aggression.

Sometimes you act as if you don’t have the ability to speak out about the things that are bothering you and instead, you just give him the silent treatment.

No man can read your mind, so don’t expect your boyfriend to change some things about your relationship unless you verbalize your feelings and thoughts.

Being jealous to a certain extent can be cute because it shows that you don’t want to lose the other person.

However, unhealthy jealousy is nowhere near attractive, and it is something that surely annoys the heck of your bf, even though he might not be telling you that.

If you’re a Sag, the thing that annoys your boyfriend most about dating you is your independence.

Being self-sufficient is amazing, but now you’re a part of a couple, and it’s about time you start acting that way if you don’t want your significant other to feel emotionally neglected.

You are always too busy to see him or to hear him out. He is annoyed by the fact that no matter what happens, he always comes second to you.

This is the man you share your life with, and it is natural that he wants to be your priority.

If you are an Aquarius, you have trouble showing your emotions, and that can be annoying for your romantic partner.

Remember that men are also sensitive creatures who need to feel loved and needed.

I hate to be the one to break it to you, but your boyfriend thinks that you’re too needy, and that is something that bothers him more than he admits.

I know you love this guy, but it’s better to give him some space than to suffocate him and keep him caged.

For a change, let him miss you a little bit and see what happens.