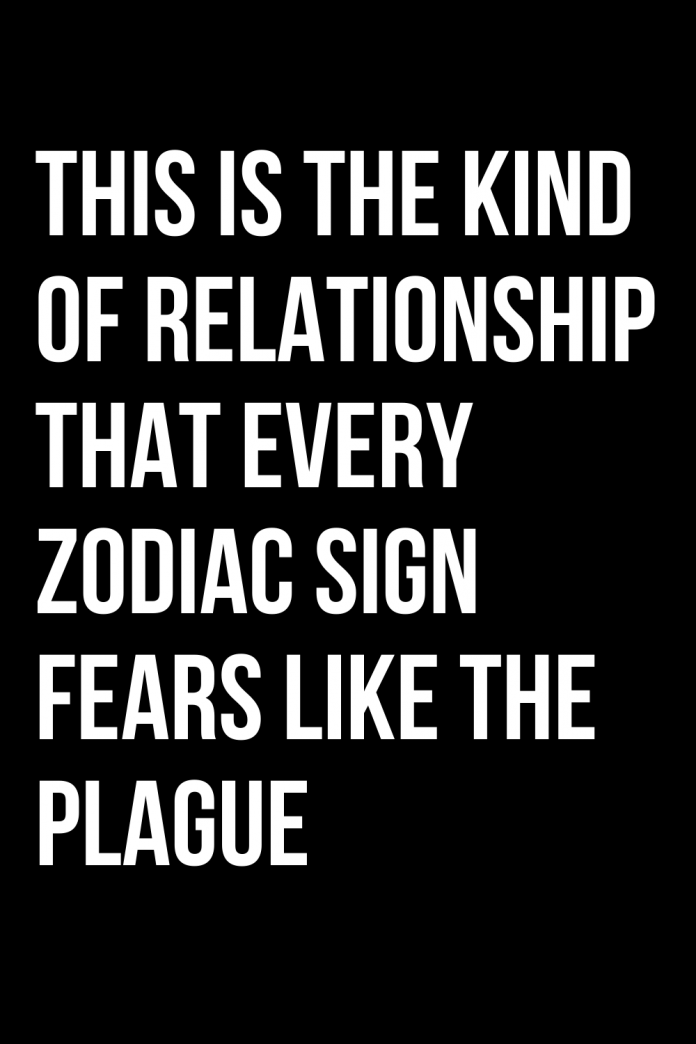 Find out what kind of relationship all zodiac signs fear. The opinion of the stars.

Each of us has a personal idea of ​​what a relationship should be like. In addition to having dreams and plans for a perfect relationship in mind, each person also has in mind what corresponds to a nightmare relationship, the one from anyone who would escape. each image of the latter varies from person to person and depends at least in part on the influence that the stars have on each of us. Today, therefore, after having seen which are the zodiac signs most predisposed to TV series and what the various zodiac signs think when they say they are well, we will find out what is the idea of ​​a nightmare relationship of each sign of the zodiac. Since this is something that has to do with the way you feel, the advice is to also check the ascendant of the zodiac sign that you want to control.

Horoscope: the nightmare vision that each zodiac sign has of relationships

Aries – A monotonous relationship
Those born under the sign of Aries are people who love to always be on the move and surround themselves with people who like them always love to do new things. For them, a nightmare story is one without stimuli and where the partner is so accustomed to the usual routine that they do not do anything to change it. Those who know the Aries well, however, know well how the mere concept of routine dislikes them to the point of making them tremble. For them, therefore, the relationship that can make them escape is the monotonous one, without stimuli and without future projects that aim at change. A story that they usually use to conclude as soon as possible to embark on new adventures.

Taurus – A relationship without mutual trust
The natives of Taurus are people who strongly believe in a relationship and who above all else want to have someone they can trust next to them. Generally, they manage to rely completely only on family members, finding themselves feeling quite alone when it comes to relationships. For this reason, they tend to trust a lot in their other half and the role it can play in their life. A nightmare relationship, for them, is, therefore, one where neither of them can trust, thus creating the conditions that for them are decidedly unlivable and that in the long run would lead them to look elsewhere, looking in other people for the complicity that has failed in their history.

Gemini – A relationship between strangers
If there is one thing that those born under the sign of Gemini need, this is the possibility of always expressing themselves freely, knowing that they can be accepted for who they are at least by the people they consider close. When they are together with someone, therefore, they take it for granted that at the basis of the relationship there is respect and confidence and when one of the two things is missing the feeling of defeat is such as to immediately put them in a bad mood, making them feel somehow wrong and unsuitable for a two-person relationship. Then, a nightmare relationship is one in which you behave like strangers, without complicity or understanding. A story from which they will escape as soon as possible.

Cancer – A careless relationship
Cancer natives are people who need a lot of attention. This happens both with friends and relatives and, of course, with the person, they are with. For them, a nightmare relationship is therefore one in which the partner tends to mind their own business, living as if they don’t exist. It is a way of doing that they detest in acquaintances and which, consequently, they do not tolerate in the person who should love them and therefore fill them with attention. If they feel pushed aside, their first reaction will probably be to attack the other person and then walk away to find someone who can notice them and make them feel loved.

Leo – A limiting relationship
Those born under the sign of Leo love to live in full autonomy, making their own decisions in total freedom and taking advantage of every little opportunity to be happy. Their concept of a nightmare relationship, therefore, concerns the presence of a partner whose only interest is to set limits on him. One thing that they just do not tolerate and that can drive them out of their minds, pushing them to distance themselves more and more from the person and their feelings. In such cases, they do not even say they are willing to dialogue because once the trust that they take for granted certain attitudes has failed, they sincerely struggle to rebuild it.

Virgo – A suffocating relationship
Those born under the sign of Virgo love being in pairs but they also need their freedom. Their concept of a nightmare relationship is therefore what they consider suffocating and where the other person is always there to control their every gesture. It is a somewhat anomalous situation because even without realizing it, they are the first to act in this way. It can therefore be said that they do not like to receive the kind of treatment that they usually give to others and that if this happens they can also go on a rampage.

Libra – A Forced Relationship
The natives of Libra love the idea of ​​having a relationship that makes them feel free and has no constraints of any kind. While having in mind the basic rules for a story that works, they always try not to dictate to read and to see how things go. For this reason, if the other person appears forced or unwilling to let go, their reaction is negative but silent. Probably they expect to be able to communicate even without words and when there are no reactions on the other side, they end up taking it to death, slowly starting to fall out of love.

Scorpio – A relationship without sincerity
One of the most important things for those born under the sign of Scorpio is sincerity. Whether it’s about important relationships or just getting to know them, they tend to base it all on this and on being able to trust others. When they feel unsure of their trust is somehow betrayed, the sense of frustration is so strong that it is overwhelming. For this reason, for them, a relationship that lacks it makes no sense to exist. Almost without realizing it, walls rise and close in an insurmountable silence and while all this happens the feeling begins to subside. In other cases, they can go crazy, get upset and seek revenge, in any case, however, the relationship is considered doomed.

Sagittarius – A relationship without entertainment
Those born under the sign of Sagittarius need to live an existence that is always festive and joyful. A relationship devoid of relaxing moments is therefore their biggest nightmare. They could probably endure everything but never a flat relationship with a sulky partner or sad moments to juggle. Used to living superficially many aspects of life do not particularly like those who tend to always deepen everything and if invited to do the same they feel cornered and suddenly depressed. For them, the only story worth living is the one that makes them happy in every single moment and never the other way around.

Capricorn – A relationship founded on boredom
The natives of Capricorn are almost unaware of the concept of boredom. Their life is marked by commitments of all kinds in which they alternate between work and their daily life. For this reason, when they are in a relationship, they expect a partner who can sustain their rhythms and give them new stimuli. Their worst nightmare? A boring story where nothing ever happens and where every little action is considered something too much. A partner who loves relaxation and who does not share their desire to always be on the move represents a real form of torture and when they tend to commit themselves this is their first thought as they would not be able to sustain this kind of relationship even if they wanted to.

Aquarius – A Pressing Relationship
Those born under the sign of Aquarius love to take life calmly and enjoy their spaces without having to struggle to get them. When they choose who to stay with, they always tend to consider this need in order not to take risks. The relationship of their nightmares is therefore one in which the person they are with constantly observes them, demands constant attention, and always invades their privacy. They hate these options so much that they fear them almost constantly, to the point of recognizing them in the bud. They could never live in such a relationship and the first thing they would do is run away.

Pisces – A flat, loveless relationship
Pisces natives love to evolve all the time. They do this in everyday life and even on a spiritual level. For them, everything is in the making and the same is also true for relationships where they must feel at the center of attention and constantly taken into consideration by their partner. What do they fear most? A flat relationship is devoid of the feelings that are practically indispensable to them. We are not talking about just love, but about respect, trust, and a sense of loyalty towards the other person, all combined with a need to grow together, get to know each other better, and move forward towards a common path. Failing to do so represents a real defeat for them as well as a nightmare from which they would try to escape as soon as possible.