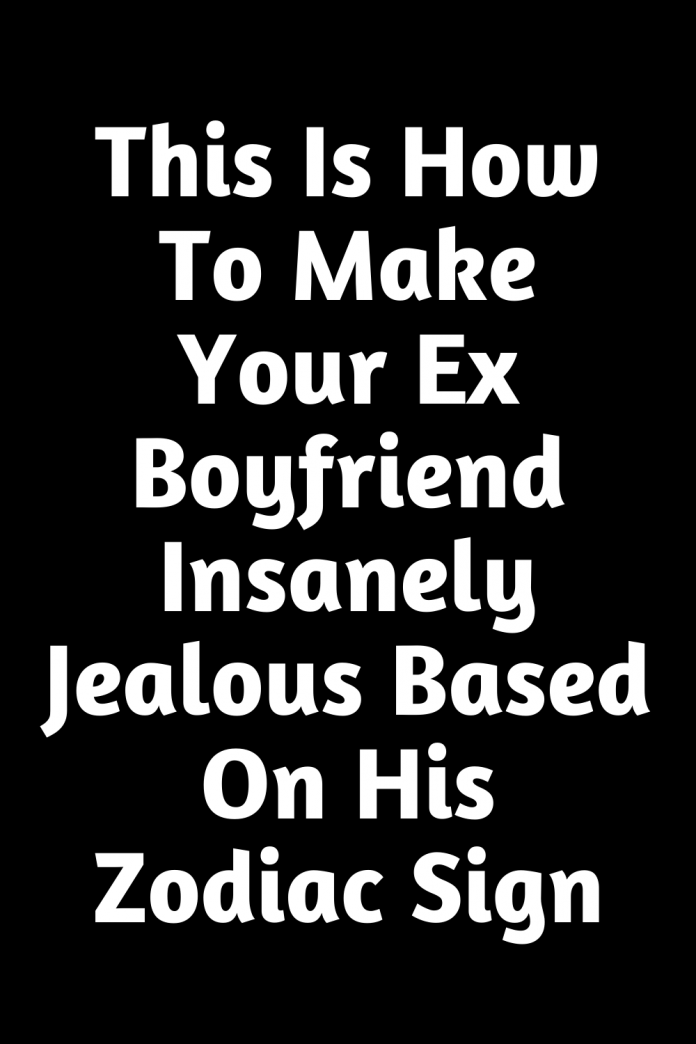 Make him jealous by going on a trip with a bunch of your friends and make sure that another guy who he always thought you had a crush on, is included. He’ll hate the fact that you’re having fun without him, but he’ll also hate that this specific guy is there doing it all with you. He always thought you were attracted to him when the two of you were together, and going on a trip with him will confirm his suspicions, and it will drive him absolutely nuts because now that the two of you aren’t together, there’s nothing he can do about it.

Make him jealous by looking fine AF. Taurus men are pretty superficial. They like things to look nice and always be put-together. They’re hoping that the breakup leaves you in a state of disheveled ugliness so that they’re confident they made the right decision in leaving the relationship behind, but prove them wrong and be your BEST self. Treat yourself. Go shopping for some new clothes, cut your hair the way you’ve always wanted to. Show them that the breakup has not destroyed you, and it certainly hasn’t made you or your life disheveled.

Make him jealous by completely ignoring him. Gemini men are very social. They don’t like to be alone and they certainly don’t like to be ignored. He won’t stop thinking about you and why you’re not answering him, and it will drive him to insanity. The best response to piss off the Gemini ex is no response.

Make him jealous by continuing to stay in touch with his family. If he has a sister, stay friends with her. Take her to get coffee or ice cream. It would really make him mad if you continued to talk to his mother. The Cancer guy is very close to his family, and he’ll get jealous when the girlfriend he already broke up with, continues to win over the hearts of the people he loves. His family loves you even after the breakup, and he hates that.

Make him jealous by going on a date with someone who is better on paper than him. The Leo man likes to be the best, and if he sees that you’re dating someone who appears to be better than him, it will bruise his oversized ego. Whether you date a heart surgeon or a devoted humanitarian, take someone out who will immediately make him feel inferior.

Make him jealous by flirting with his friends. The Virgo guy values loyalty and when a breakup happens, he expects his friends to be on his side. Try to stay friends with his friends, and he’ll consequently become paranoid that his friends like you more than him. He’ll most likely become strangely possessive over them which will totally weird them out. Don’t be surprised when you get a text saying he “was friends with them first!”

Make him jealous by going places you know he’ll be, and looking phenomenal while you’re there. The Libra guy avoids confrontation at all costs and when he sees you out after the breakup, he’ll most likely want to a) disappear or b) make peaceful conversation with you like the two of you are friends. If you’re looking particularly gorgeous it’ll be hard for him to do either. He wants to be your friend because he wants to be everyone’s friend, but when you look that good, he’ll wish you two could be more.

Make him jealous by simply existing. It’s not hard to make the Scorpio ex jealous. They’ll be jealous of what you’re doing, where you’re going, and who you’re seeing, and it will have less to do with how fun and exciting your life appears, and more to do with the fact that they wish the breakup affected you in worse ways, like made you crawl into a hole, cry, and come out with mascara running down your face. Make them jealous by showing them the breakup has not defeated you. You are still your strong and wonderful self without him.

Make him jealous by traveling somewhere exciting and documenting the entire trip on social media. Post to your story every hour and be doing something different each time. Show him that you’re more free than ever to do exactly what you want, and that you’re not bored or stagnant without him.

Make him jealous by diving head first into work and kicking a_- at your career. He’s driven and focused, and he wants to succeed. Think about all of that success he wants for himself and achieve it for you. Show him that you’re more successful than ever, and that the end of your relationship motivated you to move forward both personally and professionally.

Make him jealous by inviting your shared friends somewhere, without inviting him. The Aquarius guy hates to be bored. He loves hanging out with friends and having a good time. It will drive him crazy when you invite all of your friends somewhere and he can’t go. He’ll feel too proud to ask if he can come which will leave him feeling bored out of his mind and worse, excluded.

Make him jealous by doing all of his favorite things on your own. Go see his favorite band perform at that dive bar in the city and post a video on instagram, go to his favorite museum and take a photo next to his favorite artifact or painting. The Pisces guy is very passionate about his interests and hobbies. Do all of the things that interest him, without him.