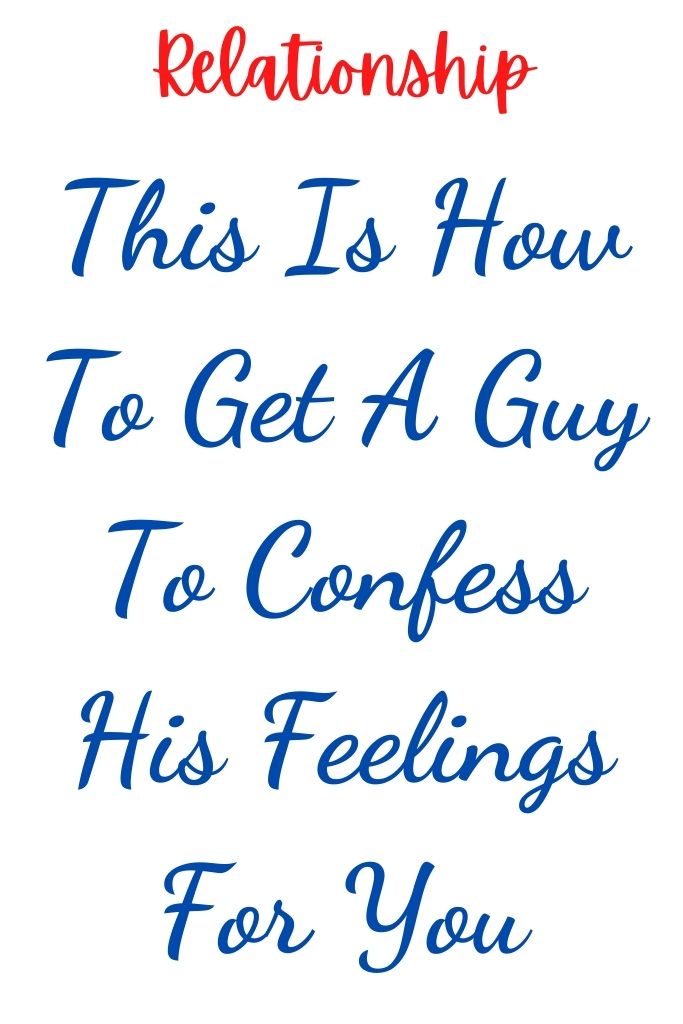 You’re spending more and more time with him, feel jittery and excited every time you’re supposed to see him, but nothing has happened yet.

You feel like he likes you and there are signs that he does, but he simply isn’t making that first move.

You’re wondering how you should play this to get him to tell you he likes you. Follow our advice and you’ll soon know how he feels.

Have fun with him

You’re at the very beginning so keep things light, breezy and fun. Show him how interesting you are to make him want to explore things further with you.

Relax and use this flirty, exciting period as best you can. Nothing beats the beginning of a crush and the excitement you feel when you’re not certain how you feel about each other.

Use all that adrenaline to have the time of your life.

Listen to him and don’t be judgmental

If you want him to confess he has feelings for you, you have to make him feel comfortable enough to open up and be vulnerable around you.

Carefully listen when he decides to tell you about his life and experiences, and try to be as understanding and kind as possible.

If you ever expect him to trust you enough to let you know about his feelings, make him feel like he can.

Show that you care about his interests

Every guy likes a girl who cares about his hobbies and is interested in things he likes.

Of course you shouldn’t pretend to like something you don’t, but I’m sure there’s something – otherwise you wouldn’t like him at all.

Show him that you’re interested in the things he loves and suggest doing them together if you think that it could be something you’d enjoy.

Express gratitude for things he does

Guys want to feel appreciated. To make him comfortable enough to share his feelings with you, show your appreciation and gratitude for the nice things he does for you.

Allow him to feel good about himself when he’s around you.

Pay attention to his body language

A guy who really likes you will show you he does, even if he doesn’t tell you directly. His face and body will face you, his eyes will be wide open when you’re speaking and he’ll be slightly smiling almost constantly.

Even though he hasn’t directly told you he likes you yet, he’s already told you with his body language. Try to be as approachable to him as he is to you and show him that you’re responding positively to his feelings.

Start paying a little bit of innocent attention to his friend

If this has been going on for a while now and it doesn’t seem like he’s going to make that first move, you can try this little trick.

Speed up his “getting brave enough to tell you’’ process by innocently flirting with his friend. He’ll get scared that he might lose you if he waits for too long and will finally make a move.

Don’t let him know you like him too soon

You don’t want him to be too sure of your feelings for him, so it’s best to keep him guessing.

I’m not saying you should pretend to be an ice queen, but don’t be too open about your feelings, the same way he isn’t open about his.

Keep him intrigued and wondering, so he has no other choice but to confess his feelings in order to find out about yours.

Ask him directly in a super cute way

If you’re usually really straightforward or you’re getting tired of waiting, you can simply confess your feelings and ask him about his.

Make sure you don’t make this too serious, and choose a charming, playful approach instead.

Wait until you’re enjoying a fun moment together and say something like: “You kinda like me, right?” or “I really enjoy everything we do together, I hope you do too.”

In this situation, a guy who really likes you will respond the way you expect him to, sharing his emotions with you.

Make sure you don’t seem desperate for his attention and don’t ever do anything that isn’t who you are just to get his attention.

You want him to like you for who you are, not to like a version of you that’s completely fake.

Don’t get lost in the game of making him like you and remember that you’re looking for a guy you can be yourself with.