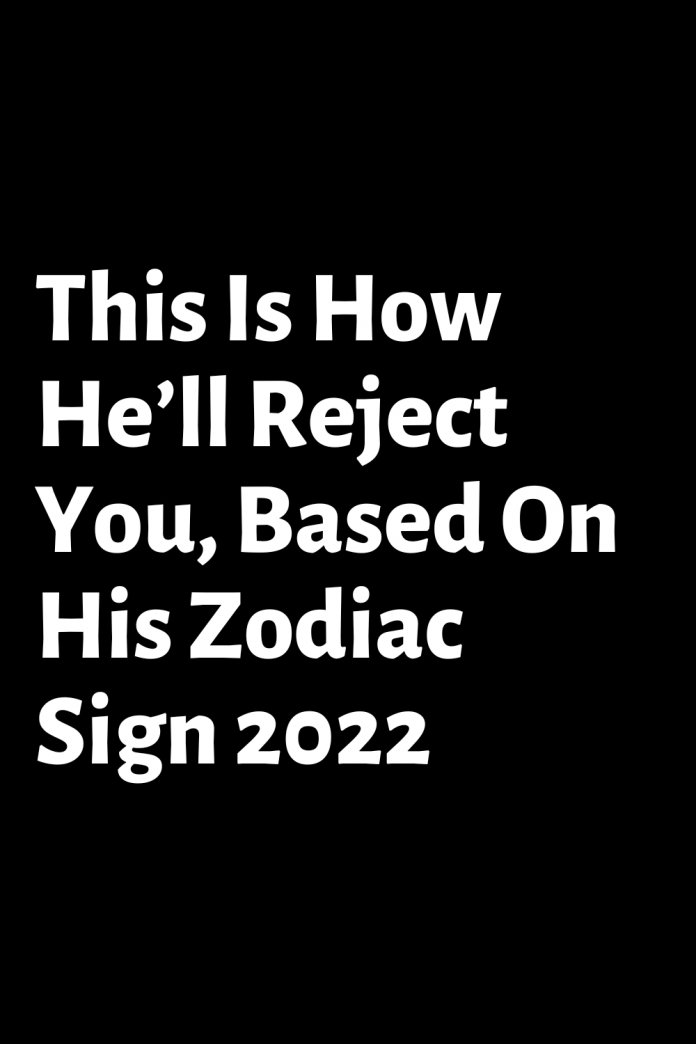 A guy turning you down is never easy to handle.

However, sadly, these things happen and whether you like it or not, you have to prepare yourself that one day, having a man you like reject you will probably happen to you, too.

But, how exactly will he do it? Will he be clear about not wanting to be with you or will he try to spare your feelings?

When an Aries man doesn’t want to have anything to do with you, he’ll just give you a cold shoulder.

You might assume that he’s ignoring you because he is playing hard to get or because he wants you to chase him, but the truth is that this silent treatment is nothing more than his way of rejecting you.

A Taurus isn’t likely to turn you down right away. Instead, he’ll take his time to get to know you and to figure out whether he likes you or not.

Of course, while he is deciding about his feelings for you, you are being led on and trapped into liking him even more.

The worst part about trying to date a Gemini is never knowing where you stand with him.

This is the guy who can like you as a person but at the same time be completely uninterested in you romantically.

So, if a Gemini man rejects you, he’ll probably do it using the infamous line: “Let’s stay friends”.

A Cancer is an all or nothing kind of guy. That means that he either loves you wholeheartedly or he doesn’t give a damn about you.

Nevertheless, Cancer men are usually overly sensitive, and this guy probably won’t have the heart to reject you loud and clear.

Instead, he’ll do everything in his power to protect your ego and feelings while telling you he simply doesn’t love you back.

Unlike Cancer, Leo doesn’t have a problem telling you how things are straight to your face.

His way of rejecting you might sound harsh at first, but later on, you’ll probably be grateful to Leo for letting you know where you stand from the very beginning.

At the same time a Virgo man in love needs time to figure out that he wants you, he also needs time to realize that you’re not the one for him.

Even though this sounds like a waste of time, the good news is that this guy will be honest about his feelings—as soon as he finds out more about them himself.

If you’re wondering how a Libra man will reject you, the answer is: he won’t.

Instead, he’ll just disappear from your life, without ever giving you closure and leaving you wondering what actually happened and where things went wrong.

Scorpio men are known to be extremely communicative and talkative which is especially good when it comes to romantic relationships.

This means that this guy will explain to you in detail why he doesn’t want to be with you.

Instead of taking everything he has to say as an insult, learn from it, and appreciate his honesty.

Sagittarius is similar to Scorpio when it comes to rejecting the ones they don’t have romantic feelings for.

A Sag won’t expect you to second-guess his intentions, and he won’t bother you by sending mixed signals you need to interpret.

He will just tell you how things are, whether you like it or not.

When a Cap doesn’t want to be with you, he’ll allow you zero contact, and you’ll have no approach to him whatsoever.

This guy won’t hang out with you, he won’t have any desire to be your friend, and he will cut you out of his life for good.

Don’t get him wrong—it’s not that he despises you or something like that, he just wants to make things as clear as possible.

If an Aquarius wants to reject you, he’ll just pretend that he doesn’t realize you’re into him.

This guy will ignore you hitting on him to the point where you’ll be embarrassed to make another move.

He is doing this to keep your feelings from being hurt and to save himself from the awkwardness of having to tell you he’s not interested.

The same way Pisces can’t hide his interest for someone, he also doesn’t even try to hide when he doesn’t give a damn about you.

Basically, if he doesn’t want you back, this guy won’t even have to directly reject you.

You’ll have absolutely no dilemma that you should move on with your life because you don’t stand a chance.