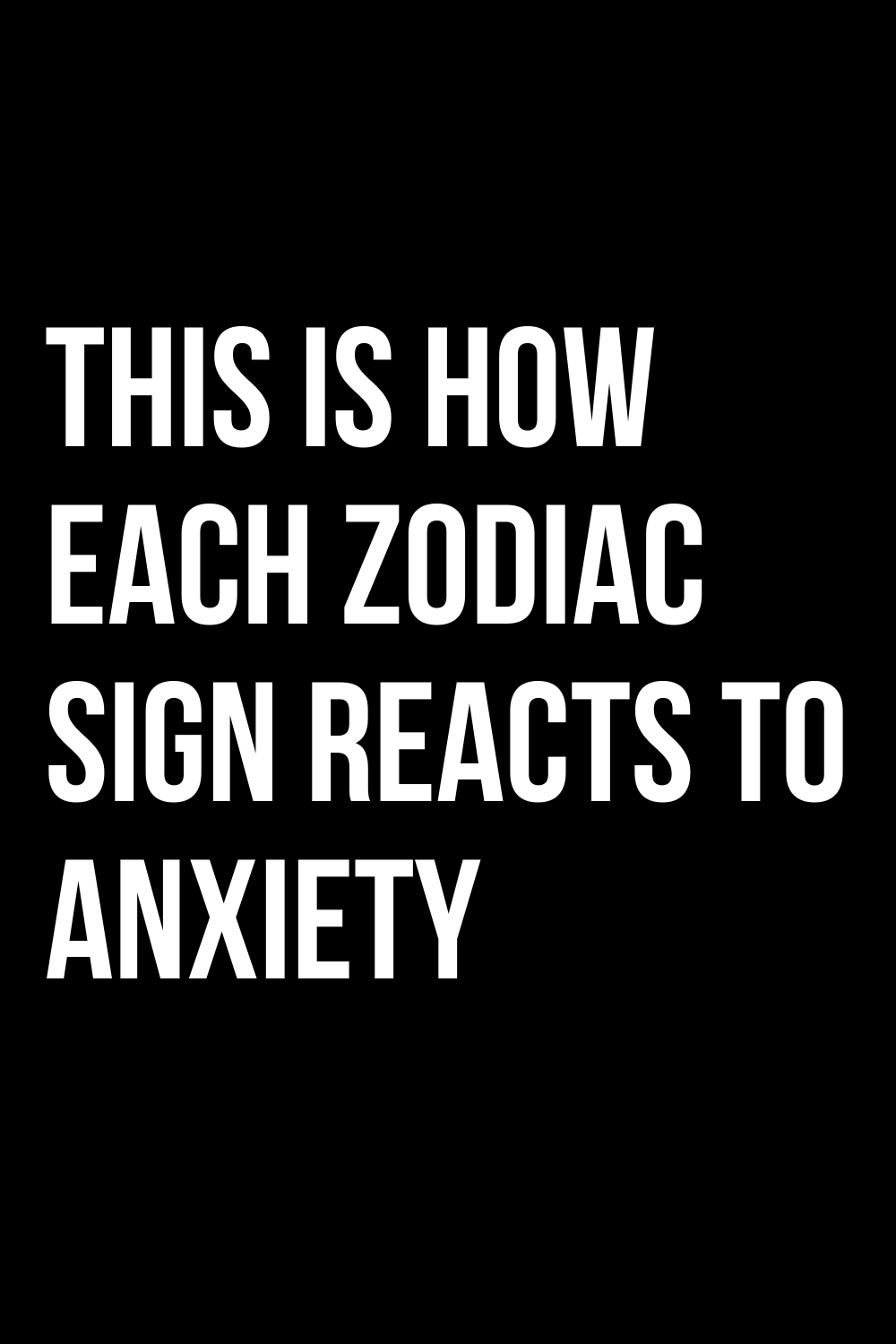 THIS IS HOW EACH ZODIAC SIGN REACTS TO ANXIETY

Find out how the various zodiac signs react to anxiety. The opinion of the stars.

Anxiety is an emotional state that is often difficult to bear. It can give the charge if limited to a few moments and exhausting if constant and exaggerated compared to the situation in which you find yourself. Giving it a connotation is particularly difficult because a lot depends on who lives it and how they manage it and, obviously, on the reasons why it comes into play. Among the many unknowns, however, there is one thing that tends to never change and it is the type of reaction that every person has when faced with a moderate state of anxiety. This, in fact, often depends on the influence that the stars have on us. Today, therefore, after having seen what kind of relationship each zodiac sign fears and which are the most popular zodiac signs for TV series, we will discover how each of us reacts to an anxious state. Since this is something that has to do with emotions, the advice is to also check the profile relating to your ascendant or that of the person you want to control.

Horoscope: The way in which the various signs of the zodiac react to a state of anxiety

Aries – With aggression
Those born under the sign of Aries are combative by nature and behave in the same way when faced with a state of anxiety. A lot depends on the reason for the sensation they feel. If it is a competition, for example, they will experience it as a spur to do better while if the anxiety is due to something they had not planned, the outcome could be very different, leading them to feel constantly agitated and to assume unpleasant ways towards the people around them. In these cases, the best thing they can do is take a few deep breaths and stay focused, avoiding having to face important conversations because the anxiety would take over and lead them to say or do things they would sooner or later regret.

Taurus – With determination
The natives of Taurus are born perfectionists. At the same time, they love to live in a calm and never high-spirited state of mind. Anxiety, therefore, is something intolerable for them that pushes them to take action to check that everything is in order as they think. Ironically, then, while not loving the feeling they feel, the natives of the sign are motivated positively by the anxious states that lead them to speed up the times and to fully commit to whatever they are doing at the moment. A state of mind that if not exasperated then does them well, even making them high enough to achieve what for them is perfection.

Gemini – With anxiety
As absurd as it may seem, those born under the sign of Gemini tend to react to states of anxiety with more anxiety. Dual and often quite emotional, they easily get into crisis when it comes to reacting to a situation that is in their minds is in danger, in reality, it is often simply something to be solved with a few moves. For them, however, everything is black or white and so even the smallest anxieties become a case of state capable of making them go haywire and depress them if they do not feel they have the necessary means to counter it. A solution? Focus on each issue a little at a time, so that they have a specific idea of ​​small parts and not a global vision that, in their eyes, will always be too big to manage.

Cancer – With irritability
Generally, the natives of Cancer do not easily feel anxiety and when this occurs it is almost always for a reason related to someone they love and that, suddenly, they fear losing. When this happens their emotional state is altered, leading them to overreact to any stimulus. Thus, if on the one hand, the fear of losing someone leads them to change their way of doing, closing in on themselves, on the other hand, exaggerated reactions risk making them go in the direction they fear so much. A situation that they struggle to understand and which is therefore difficult to resolve because even after some time and after several similar reactions, they are unable to change their attitude even by committing themselves.

Leo – With moments of instability
Those born under the sign of Leo are used to having everything under control and this, combined with the great confidence they have in themselves, leads them to very rarely experience feelings of anxiety. What happens, therefore, end up acting showing signs of instability. Depending on the circumstances, they may become aggressive, jealous, or simply insistent on saying what they think is right for them. An attitude that does not work with everyone, leads them to increase their anxiety about the feeling of not having the control that they took for granted. A situation from which they can abstract only by accepting that things can not always go as they hope and that it is sometimes better to let things go rather than peg and hold them back.

Virgo – Becoming almost manic
Virgo natives are people who need to have everything under control at all times and who love to organize and plan everything. Generally, this way of acting leads them not to experience particular emotional states and when this happens they feel so unprepared that they go into crisis. In defense mode, therefore, they end up becoming almost manic, exasperating their ability to always organize everything and starting to plan every little thing with the risk of transmitting anxiety to anyone around them. Fortunately, they tend to learn from past experiences and manage to avoid finding themselves more than once in a given situation. Their reaction to anxiety, however, will always remain the same.

Libra – Isolating yourself
Those born under the sign of Libra are extremely sociable, moderate, and always able to find the right solution to every problem. This way of being theirs tends to reassure anyone around them, making them almost a point of reference for others. Too bad that when an unexpected situation occurs, anxiety catches them so unprepared that it hurts them, pushing them to isolate themselves so as not to have to live with other peaceful moments that in this new emotional state they would not be able to manage nor tolerate. Unfortunately, withdrawing into themselves makes them even more nervous, limiting their analytical skills and preventing them from overcoming the moment of anxiety. In fact, for them, it would take the exact opposite,

Scorpio – Trying to Control
When they feel particularly anxious, those born under the sign of Scorpio tend to try to silence what they feel by investigating the possible causes. In this way they almost always end up concentrating on often useless details, absurdly finding other reasons to be anxious. This way of doing it makes them particularly tense and always on who goes there, all with the risk of leading them to overreact with others, sometimes even for no reason. Unfortunately, calming down is difficult for them, and only by discovering the true origin of anxiety and remedying it can they hope to return to normal.

Sagittarius – Limiting oneself
Those born under the sign of Sagittarius are among the liveliest in the zodiac, always on the move and with a thousand things to do and think about. When anxiety sets in, their way of failing leads them to limit themselves to control an emotional state that they just can’t stand. In this way, however, they end up exasperating the thing because by removing distractions, going out, and socializing moments they end up feeling more and more depressed and, consequently, more anxious.

Capricorn – Looking for loopholes
When they feel anxiety coming, the natives of Capricorn end up looking for loopholes that can distract them from anxiety and soothe them. If they do not succeed with positive thinking, they increase a load of commitments in order not to think and to become so tired as to silence the anxiety. Sooner or later, however, they always find themselves having to deal with the real reasons for anxiety, and usually the later they do it the worse it is. The best choice for them is therefore to take courage and immediately face what anguishes them so as not to get tired unnecessarily to escape from something that sooner or later they will encounter on their path.

Aquarius – With too much emotion
Those born under the sign of Aquarius are usually calm and relaxed but when they feel anxiety coming they suddenly become emotional, closing in on themselves and becoming nervous. This leads them to become even more reserved or to let off steam at times in an excessive way with those around them. For them, feeling anxious about something is completely useless and not being able to stop it makes them nervous because it makes them feel unable to manage their emotions. Living it all with so much tension, however, only makes the situation worse, creating a vicious circle from which they often struggle to get out.

Pisces – With the presence of mind
Pisces natives react to anxiety by getting to work. When it is linked to some activity or something they are doing, they manage to make it almost positive, finding hidden energies and resources to give the best of themselves in every respect. If we talk about effects or abstract things, however, they end up becoming emotional. For them, anxiety is often a wake-up call for which they tend to worry as they are aware that they can often and willingly capture what goes around them. In this case, they always try to grasp the origin and when they can’t, they work even harder to try as many options as possible, to understand which of the many can give them relief, thus putting an end to their anxiety.