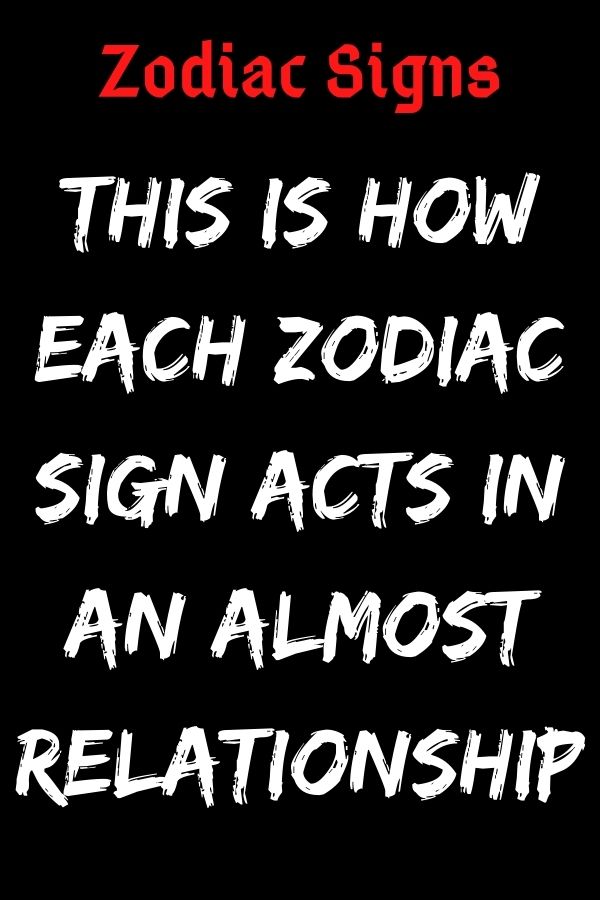 Being in an almost relationship isn’t something anyone can do.

While it suits some people perfectly, it drives others nuts.

Find out what kind of role your zodiac sign has in the way you act when you find yourself in an almost relationship.

We all know Aries is impatient.

Even though they can sometimes be casual about commitment in their relationship, they usually want it all and they want it now.

They might even go as far as to start giving even more of themselves than they usually would, just to keep things moving forward.

An Aries wants to be the number one choice at all times and they won’t stay for anything less than that.

Taurus has a possessive side to their personality.

They might try to be more casual and choose to be in an almost relationship but they won’t make it.

What will probably happen to them is that they’ll turn into the worst version of themselves—jealous and obsessive.

They might even opt for manipulating the other person into a commitment, which we all know is not the best start to any relationship.

A Gemini might be the one to handle their almost relationship quite well.

Even though they like eventually committing, keeping the fire and the mystery is a plus for them.

They will enjoy the charm of a fling but they will start wishing for more sooner or later.

When that step comes, however, they won’t be pushy.

Cancer needs to have the opportunity to be vulnerable and emotional to the core when they are with their partner.

Being in an almost relationship might leave them keeping their true feelings to themselves.

Any true Leo enjoys the excitement an almost relationship offers.

They will certainly enjoy it for a while but their overthinking might ruin things.

They can get too restless to know exactly what and how the other person wants them to be.

All in all, however, they’re probably the sign that can keep an almost relationship going for the longest period of time.

Now Virgo is most definitely not one to be in an almost relationship.

They prefer things done their way and planning ahead is usually a part of their idea of how things should work.

Almost relationships simply don’t work with the sentiment of a Virgo and even if they do find themselves in one, it won’t last.

Librans can’t understand the concept of an almost relationship.

If they like a person, they want to be with them and that’s that.

They don’t see why two people who care for each other and can function as a couple on any level shouldn’t just be together.

They can function in an almost relationship briefly but it’s not something they enjoy.

A Scorpio isn’t too keen on trusting other people.

When they think about love, they want to imagine it as something that will bring out their deepest emotions and put them in a comfortable place.

An almost relationship might be something they would enjoy but it’s almost certainly something that would take them at least one step backward on their path to creating a healthy relationship in their life.

An almost relationship is perfect for Sagittarius. It has everything they need in their relationship in general: a sense of freedom, a casual connection and the excitement of an adventure.

There might come a time in their life when they will be searching for something more serious but usually, an almost relationship is a scenario where they function best.

While Capricorn isn’t necessarily one to choose to be in an almost relationship, they function great in one.

Sometimes, they can be a bit selfish and end up hurting the other person, however.

They care about their own interests and goals above anything else and if an almost relationship is something that suits them at that moment, they are sure to make it work.

Being in an almost relationship is amazing for an Aquarian.

Actually, everything an almost relationship has to offer are the exact things they need.

They may not even realize they are in an almost relationship because whenever they share time and emotions with their partner, that’s as real to them as it gets.

They don’t care about commitment in its proper sense and can enjoy an almost relationship as long as they feel their partner appreciates them.

They define their relationship by the romance and if there was no romance, a Pisces wouldn’t be wasting time on that relationship at all.

They idealize everything and they might have false expectations of where their relationship is heading.