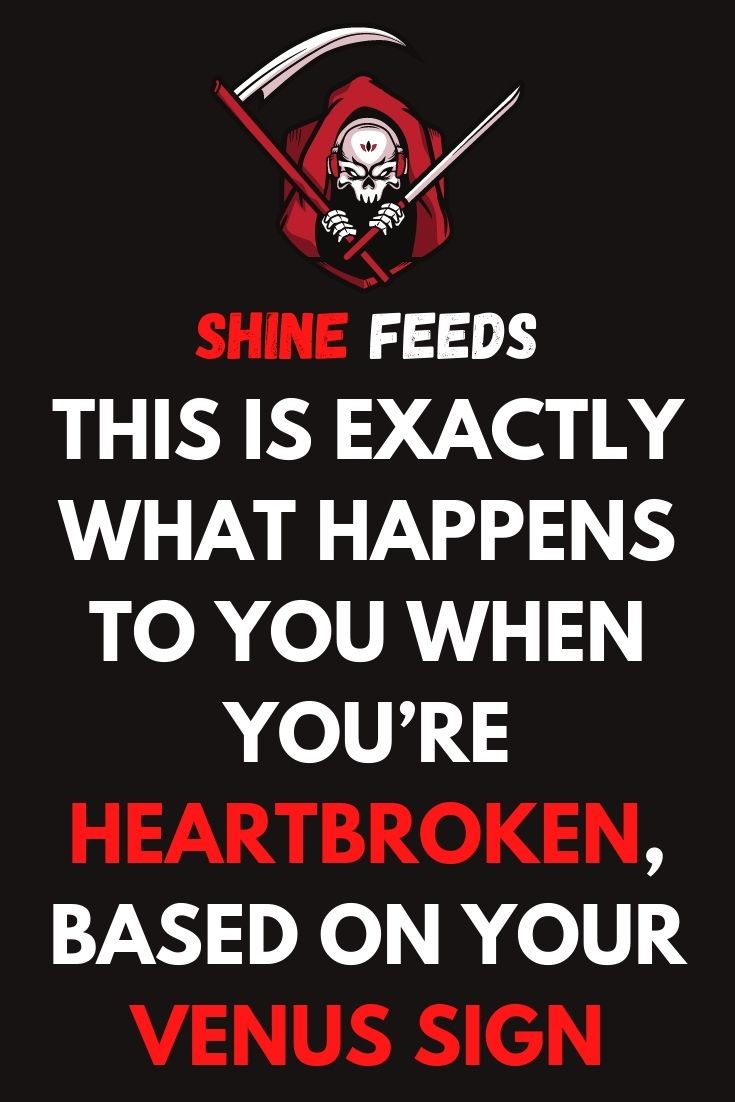 THIS IS EXACTLY WHAT HAPPENS TO YOU WHEN YOU’RE HEARTBROKEN, BASED ON YOUR VENUS SIGN

Their heart is shattered when they are disillusioned by love. Everything looks like it might be the end, but this is the nature of the Taurus, they do not like to dive into things without analyzing, so when it does not work out, they end up questioning themselves and how they could have missed the big gaping hole in their relationship. Because they are fixed, they will rarely forget who wronged them. The person will remain in their mind for years, even if they are in a prosperous relationship with someone else by then. This is a tough placement to have when in love unless it falls in the air or firehouse, it will help alleviate some of the hurt but not all.

Their ego has taken a critical blow. It can take a long time for them to feel the same again because they will learn not to be as trusting. Like the Taurus Venus, the Leo Venus refuses to forget but they do not allow their heartache to dictate their life. In social settings, they will play it off and be cool about it. No one will know how much they hurt, instead, they will recant a tale of how they came out the victor and will leave the heartbreaking details out of it. This is a resilient Venus sign and with time they will grow to become greater, so when the right person comes along, they will give them the world.

It is hard to forgive and forget when you have a Scorpio placement. Venus here aches, dies, resurrects and is transformed. When the Scorpio Venus has been burned by someone that they had an undying love for, the Knight in Shining Armor becomes the Nightmare and chaos. This Fixed sign can become vengeful and vindictive. They can easily cross boundaries just to get a taste of sweet revenge. Their stinger, fueled with Plutonian rage, packs a poison that is slow to burn and destroy. If the native decides to take the high road and leave things with Karma, they will get clarity and peace of mind. Part of them knows that if they were wronged, they will get some form of justice.

Of the Fixed Venus signs, Aquarius sees things on a grander scale. They hurt deeply but will not express it in a way that the others might. Their struggle is cerebral and they will try to make logical sense of it all. Here we have a placement that allows for a spiritual growth after a heartbreak. They will seek the guidance of friends and family. They will immerse themselves through social media, they will expand with whatever might aid them. Aquarius is open to healing. They will never forget, but they understand that it is more important to move on, make new contacts and generate new feelings of love.

Like other air signs, the Gemini will try to rationalize the events to the point that they will get lost in their mind. It will take some time for them to bounce out of their slump, but this is not a sign that will wallow in their pain for too long. They have charm and charisma, making it easy for them to draw in new romanced. Gemini Venus enjoys having fun and living in the moment. They understand heartbreak comes, but the moment they connect with someone new, all thoughts of the past get pushed away in their mind and there will only be room for their new loves.

The Virgo Venus is an interesting one. Venus in this sign is practical and serving. They understand the limits of humans and will not risk themselves with any form of heartbreak. Virgo is measured, they plan and they watch. These are the lovers that are also guardians. If their trust has been broken and/or a relationship has ended, the guardian will leave. The ex-lover might suffer more than the Virgo because the void they leave behind will be hard to fill. Virgo, on the other hand, might become more closed off and analytical. They need to learn that heartbreak only helps one to grow, so they should allow themselves to be a bit more vulnerable for their next love.

Heartbreak for this Venus sign is earth-shattering. It is hard for the native to fall hard for someone, so when the reality that a relationship with someone they love has ended, it will be a hard blow for them. Sagittarius is the optimist and Venus here allows for the native to move on with grace. They will seek to travel, either through books or other countries. It is easy for their larger than life personalities to shine through and to attract new people. However, settling down again might be harder since they will have a new philosophy or mantra to live by.

Venus is exalted here, so they understand love and fear heartache the most. The Pisces Venus will try to escape and will find refuge through things that might obscure their path to growth. Venus here might cling to memories and may even persuade their partners to return. When they have fully understood that it is over, the light of love in their hearts could be extinguished. Pisces needs to learn these lessons to prepare themselves for the next phase in their love life. Through heartbreak, they ignite the philosopher within and if they learn, they become a powerful force.

The tempest brews within the Aries when they have been hurt. Their rage overpowers their other senses. They will express their hurt through in a very visual way because they will not know how else to react. When the Aries is in the dating stage, they can be very selfish, but once in love, they will be extremely devoted and naturally expect the level of devotion to be reciprocated. This is why when their world is shattered, they will try their best to destroy every physical object around them. After their fiery rage has been extinguished, they will sit in their destruction and plan on ways to move on.

Venus here is the expression of love in one of its purest forms. We see a selfless individual who gives themselves emotionally to their partner. When that trust is betrayed, the Cancer Venus can become the serpent. Because of their giving and loving nature, many will view them as weak, but in reality, this Cardinal sign only masks their power through their kind actions. The dark side of the Cancer Venus is vindictive and destructive. They will be inclined to cause chaos, like their fellow Cardinal signs. When the storm has calmed, they will hide into their own shells, repairing their hearts slowly for the next phase in their life.

It is hard for the Libra to be destroyed. This is one of the more resilient signs because they can weather any storm, especially in relationships. The Libra will forgive and will appear as if they have forgotten, but they do not. Only when they have been broken and have discovered that they need to focus on themselves instead, will the claws come out. This sign will channel the selfishness of the Aries, they will heal through their ego. Libra is the tactician and will devise a plan to make themselves feel victorious. Being the representative of Venus has its perks because the Libra will always attract someone new and make any ex wish they had them back.

Heartbreak for a Capricorn is transient. This sign rarely hangs onto a relationship that has ended because the Capricorn does not care for failures. Venus here channels its rage and anger through work. The Native will seek refuge in their job, opting to work as hard as possible. They will go to the gym, improve their health and focus on bettering themselves. Status and acquiring power will be enough for them. In the event that they do meet up with an ex, they will flaunt their accomplishments shamelessly. Capricorns always win.