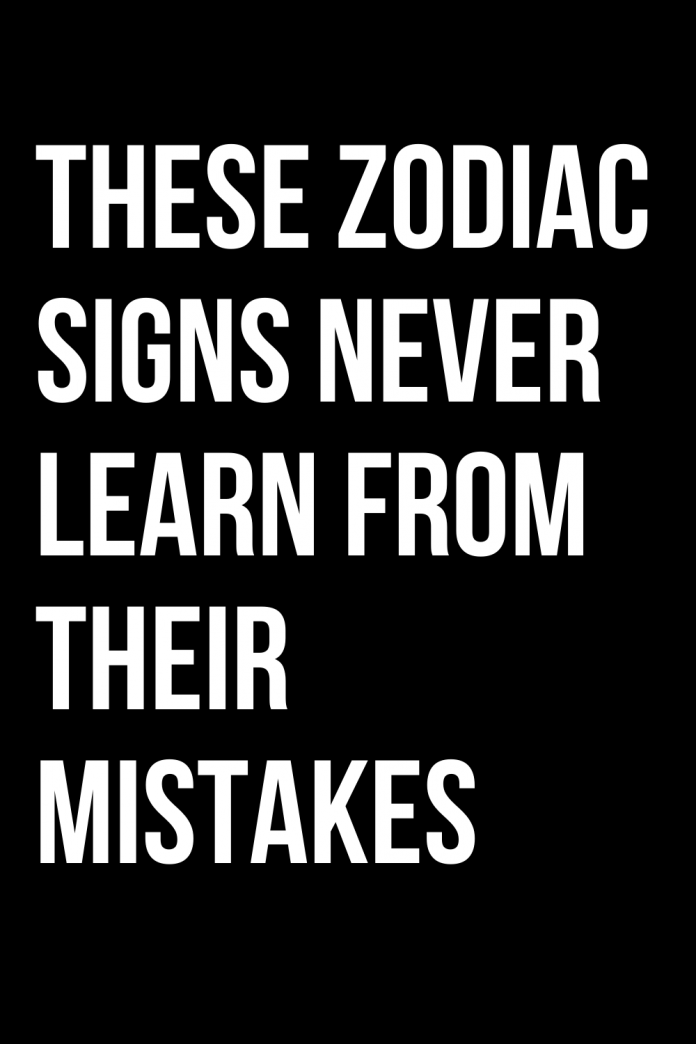 Find out which are the zodiac signs that never learn from their mistakes and which ones, instead, make them a lesson for life.

An adage says that to err is human but to persevere is diabolical. An expression that turns out to be true in many respects and that affects many more people than you think. This is because although every mistake is often obvious, falling back into one’s mistakes is something that most people find almost instinctive. The reasons can be many: we pass from the lack of ability to question oneself to the inability to recognize what has led to mistakes. In short, although no one would ever admit it, many more people always fall back into the same mistakes as you think. Figuring out which ones are inclined is difficult because once again several factors come into play.
However, some zodiac signs seem to be more predisposed to this problem while others, thanks to the influence of the stars, appear more aware and better able to predict future errors.
Since this aspect can prove to be important in certain situations in life, today after having seen which are the most generous zodiac signs in love and how the various signs react to betrayal, we will discover which are the signs that never learn from their mistakes and which ones, instead, they manage to learn at least something. Since this is an aspect that also has to do with the way of feeling things, the advice is always to check the profile of the ascendant, to get a clearer picture.

Horoscope: The zodiac signs that never learn from their mistakes and those that do

Aries – They learn very little
Those born under the sign of Aries live a life on the run. For this reason, when a lesson to learn arrives, they tend not to dwell on it too much, taken up as never before by a thousand other things to do. Their learning from their mistakes only materializes when it comes to something so serious that it gets them into trouble. In this case, they tend to memorize the actions not to be carried out and continue swiftly towards their projects, not at all alarmed by previous errors but decidedly motivated and proactive. A way of doing that on the one hand makes them real daredevils and on the other possible unconscious.

Taurus – They Learn Enough
Taurus natives are very reflective and tend to analyze every situation they encounter in their life. When they come across a mistake they are likely to stop and try to understand it so they never have to repeat it. At the same time, however, they try to avoid unnecessary waste of time, trying to skim off those they deem not repeatable. Theirs is a sort of defense put in place to convince themselves not to risk committing who knows how many mistakes and this way of doing sometimes pushes them to the very opposite result which they risk not being able to recognize. A little training in this sense should lead them to resolve this lack, making them more present and able to make the experiences of the past profitable.

Gemini – They rarely learn
Although they are objectively attentive and able to recognize a mistake, those born under the sign of Gemini tend to never anchor themselves to what was, preferring to take a futuristic view of things. For them, mistakes are something they stumble into only to get up again immediately afterward and start living again. When this happens, they feel invulnerable and almost feel pleased with their skill in catching holes where others do not see them. Their problem is that they fail to recognize situations they have already seen when they arise and this makes them prone to repeat their mistakes, including those they have experienced many times.

Cancer – They Rarely Learn Cancer
natives are too steadfast in their positions to be able to catch any mistakes to fix them. When someone points out to them that they have done something wrong, they turn up in a hedgehog, even becoming grumpy and when they realize it themselves, the result is even worse because they take it out on everyone but themselves, becoming short-tempered and tending to nervousness. It is therefore easy to understand how we are not in the least set to improve and if this happens it is only because the mistake committed is so visible that we cannot look away. It must be said, however, that when they have a lesson to learn, they manage to do it rather quickly.

Leo – Quite good at learning
Those born under the sign of Leo live trying to improve themselves as much as possible and this leads them to want to discover every flaw in their way of doing. Despite good intentions, they find it difficult to recognize mistakes because they believe they are people inclined to always make the correct choices. When they manage to realize something is wrong, however, they are pretty quick to figure out how to improve and never make the same mistake again. It is a modus operandi that they implement almost automatically and for which they can define themselves as more than trained.

Virgo – If they learn, they do it reluctantly
Virgo natives are people who, while often judging others, do not like to do the same with themselves. When they make a mistake, they tend to blame the circumstances or those around them, avoiding feeling responsible and all because doing so makes them feel uncomfortable, making them vulnerable on the one hand and particularly nervous on the other. All this translates into a lack of willingness to get involved and learn to work on oneself. Expecting changes from them is therefore very difficult and even if at times they are willing to change out of love or because they are forced by situations, they will always do it with little desire and with a minimum expenditure of energy.

Libra – They almost always learn
Those born under the sign of Libra are people attentive to every little detail and by this, they tend to immediately notice any errors, especially if they start from them and they are mistakes made for lightness or for having miscalculated certain factors. Being people who love perfection, they do not gladly accept the idea of ​​having taken the wrong steps but when they realize it they prefer to make the best of a bad situation and get in motion to improve things. It follows that they usually make mistakes only once because keeping in mind every false step, they avoid repeating it, changing as much as possible, and with good reason, the path to take.

Scorpio – They Learn Fast Enough
Scorpio natives are people who don’t like to make fun of themselves. This means that if they make a mistake they are the first to both notices and admit it. The next step will be to try to understand why they made a certain mistake, so as not to run the risk of repeating it. Rather rigid with themselves, especially when it comes to learning new lessons, they are always ready to roll up their sleeves and strive to improve day after day. For these reasons, it is difficult for them to find themselves making the same mistakes and when a similar situation occurs they usually face it differently and, above all, are mindful of the lesson received.

Sagittarius – They learn in a fluctuating way
Those born under the sign of Sagittarius do not like to learn new lessons even if it must be said that, on the other hand, they love to give them. Often blind to their mistakes, they always know how to justify themselves by pointing the finger at situations or other people involved. This leads them not to always learn any mistakes even if it must be said that when something is pointed out to them they at least take the trouble to think about it. Their way of acting, however, is quite fluctuating and all because they are often taken by a thousand other things that act as a distraction, preventing them from concentrating as they should on the parts of themselves to improve.

Capricorn – They just never learn
If there is a sign of the zodiac that is reluctant to understand the mistakes made this is that of Capricorn. When they are wrong in something, they prefer to turn a blind eye and this leads them to repeat their steps over and over again, ending up hurting themselves even in the same places. It is a way of acting that is difficult to understand but that they put into practice instinctively. The bad thing is that while making him notice it, they will always try to divert the conversation and all because they struggle to manage the very idea of ​​having done something wrong. For this reason, seeing them learn from their mistakes is virtually impossible.

Aquarius – They don’t want to learn
The truth is that those born under the sign of Aquarius from life try to take as much as they can and everything without ever having to give. If they find themselves wrong in something, they laugh about it and go straight on, certain that this will not be repeated but unable to prove it to themselves or others. The truth is that they usually don’t have worries about it and for this reason, they tend to ignore every alarm bell and run the risk of repeating themselves over and over again when it would take very little to accomplish one of the many lessons that life tends to give. They.

Pisces – They learn their way
The natives of Pisces have their way of learning things and this also applies to mistakes. Although they are perfectly capable of recognizing any mistakes, they tend to give themselves very elaborate explanations and sometimes see things in a way that is a little too utopian. This leads them to be the dreamers of all time, a bit with their heads in the clouds but able, if they want to, to rationalize. And it is precisely when they bring reason that they are finally able to take steps forward, learning from their mistakes to prove themselves capable of growing.