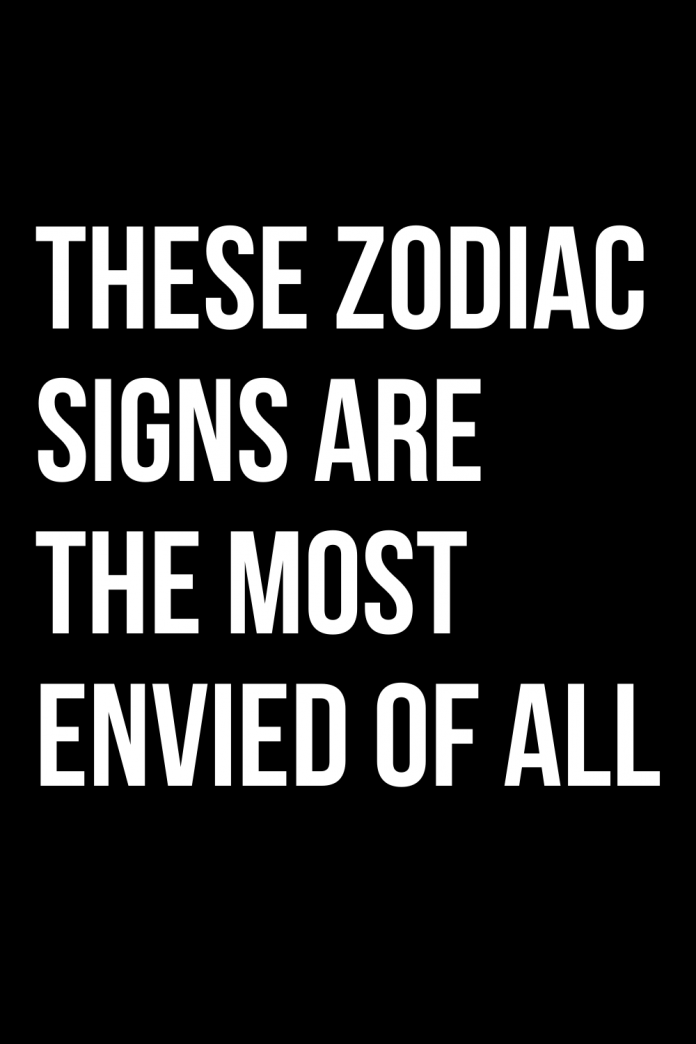 Find out which are the most envied zodiac signs of all and which ones are not at all.

Envy, as we know, is often inherent in the human soul. Whether it’s good or bad, you often can’t help but try it out, especially when faced with certain characteristics. What is often not thought of, however, is that people envy not only wealth, beauty, and success but also the way of living and conceiving life. Thus, at times, it can happen that objectively more fortunate people than others find themselves desperately envying those who are worse off than them and all because the way to face things or to know how to enjoy even the simplest moments is something that cannot be bought and which represents that something extra that many aspires to. Since the way of being and transmitting one’s happiness is often influenced by the stars, today after having seen which are the most hated zodiac signs and which are the most generous signs of the zodiac, we will find out which are the signs that are often envied and which ones are not.

Horoscope: How envied are the various signs of the zodiac

Aries – Quite envied
Those born under the sign of Aries are people who love to be the center of attention and to succeed they often get to flaunt what they have, making it even more palatable than it is. Since they always appear cheerful and carefree, they tend to attract enough envy, especially from those who, not knowing them thoroughly, believe their every word, assuming that all that glitters is gold. Obviously, for them, knowing they are envied is not a problem at all, on the contrary, being envied makes them feel fulfilled.

Taurus – Envied
The natives of Taurus are especially envied for the serenity they transmit. Everything, done by them, appears simpler than it is and this pushes others to admire and envy them in secret. Generally, being people who tend not to show themselves too much, they are not even aware that they are envied and this is because due to their way of being, it is difficult for anyone to go so far as to let them know. Nonetheless, when they manage to face life with the right serenity, always showing themselves on the piece and never prey to anxieties or fears, they are envied by those who, even if they try hard, fail to get even half of their results.

Gemini – Quite envied
Those born under the sign of Gemini are usually envied for the sense of freedom they transmit and for the joy with which they almost always face life. For them, everything is a challenge to live fully and this seen from the outside can be tempting. Their way of being, however, is really difficult to understand and develop and this makes someone think that what they have has rained down on them. In truth, all they do is limit themselves to being themselves without any restraint, always ready to pay any consequences but with the awareness that it is better to risk feeling free than by locking yourself in a cage.

Cancer – Little Envied
Cancer natives aren’t often envied. Their way of life is unusual enough to be understood by others and the desire they have to be on their own or, better said, in their comfort zone is such that they are never noticed too much unless it is them. to want it. For this reason, there are not many who envy them and although in general the common thought sees them as relatively peaceful people and able to enjoy life, most of the time we stop to appreciate them but never to envy them. Probably because their lifestyle is not understood by everyone and this leads others not to think they want to imitate it.

Leo – Often envied
Those born under the sign of Leo love to be noticed and feel the best when, being the center of attention, they can perceive the envy of others. A goal that they easily reach since in the eyes of others their life is often perfect and without problems, which they try to show as much as possible, at least to people they know marginally. Towards those who know more deeply they tend to be more sincere, which is why, although they are envied, they are usually only envied by strangers or acquaintances.

Virgo – Not envied
Let’s face it, Virgo natives aren’t often envied and that’s because their negative attitude is often so excessive that it distracts anyone from wanting to live in their shoes. Complaining often, even when they have something that could be flaunted, they tend to be admired or appreciated and this is because those around them, aware of all the negative aspects expressed by them, come to think that they have somehow deserved what they have. This way of seeing things may not belong to everyone. It is certain, however, that they are among the least envied signs of the zodiac of all.

Libra – Envied in a Positive Way
Those born under the sign of Libra inspire a type of positive envy. Always in a good mood, gentle and moderate, they never flaunt what they have and are known for the ability to make everything more beautiful, they are above all admired. Even their small or big wins are always seen positively and this is because they always have a polite way of expressing themselves that does not in any way arouse negative thoughts. So yes, it can be said that they are envied people but the one directed at them is rarely a negative type of envy.

Scorpio – Much envied
Although not easily realized, natives of Scorpio are often envied for the innate charm that sets them apart and for the strength they display in different circumstances. They probably appear stronger to others than they are and this contributes to both positive and negative envy of them. Only those who know them well know-how behind every victory there is often only a great job, which is why the envy addressed to them often comes from those who do not know them thoroughly or have a superficial idea of ​​them.

Sagittarius – Half envied
Those born under the sign of Sagittarius are difficult people to frame and this means that people are often uncertain about how to relate to them and even more about what to think. While there may be a kind of envy for their ability to be free, on the other hand, the lifestyle they tend to have is not always well seen or understood and this detail greatly reduces the possibility that someone will want to live it. their life. For this reason, it can be said that they are people half envied. A half that concerns more than anything else their ability to put themselves at the center of the world, chasing their dreams, sometimes even if these are to the detriment of others.

Capricorn – Hardly ever envied
Capricorn natives are generally reserved and unwilling to brag about what they have. It is therefore difficult for others to find something to envy them for and this means that their life, however, appreciated, never arouses particular emotions on the part of those who observe them. It must also be said that the few times someone finds themselves envying some aspect of it they take care to let it be known that all that glitters is not gold and they do it in a way so convincing as to be able to quickly change anyone’s mind. This is why I am practically never either in the spotlight or the object of the envy of others.

Aquarius – Not at all envied
Those born under the sign of Aquarius are so detached from others that they do not easily arouse envy and this even when they have something to brag about. Their way of life is so over the top as to be truly inconceivable to most people who, at most, find themselves feeling curiosity towards them but never else. On the other hand, it must be said that they too are not exactly communicative and that the few times they choose to talk about themselves they do it briefly, avoiding flaunting the beautiful things they have and all because, among other things, they are also quite jealous of their privacy.

Pisces – Much envied
The natives of Pisces are among the most envied signs of the zodiac of all. This depends on their way of approaching life and the goodness of the feelings that distinguish them and that leads them to see everything with eyes full of dreams and hopes. For others, this aspect, combined with the ability to always see the positive side of things, is a reason for envy. It is a way of being that cannot be acquired in any way and that looking at them seems to be able to make everything more beautiful. Ironically, sometimes they are envied even when they are not doing their best and this is because they are reluctant to complain, they prefer to stoically face difficult times, while still giving help to those around them. A detail that the most superficial people find hard to notice or understand.