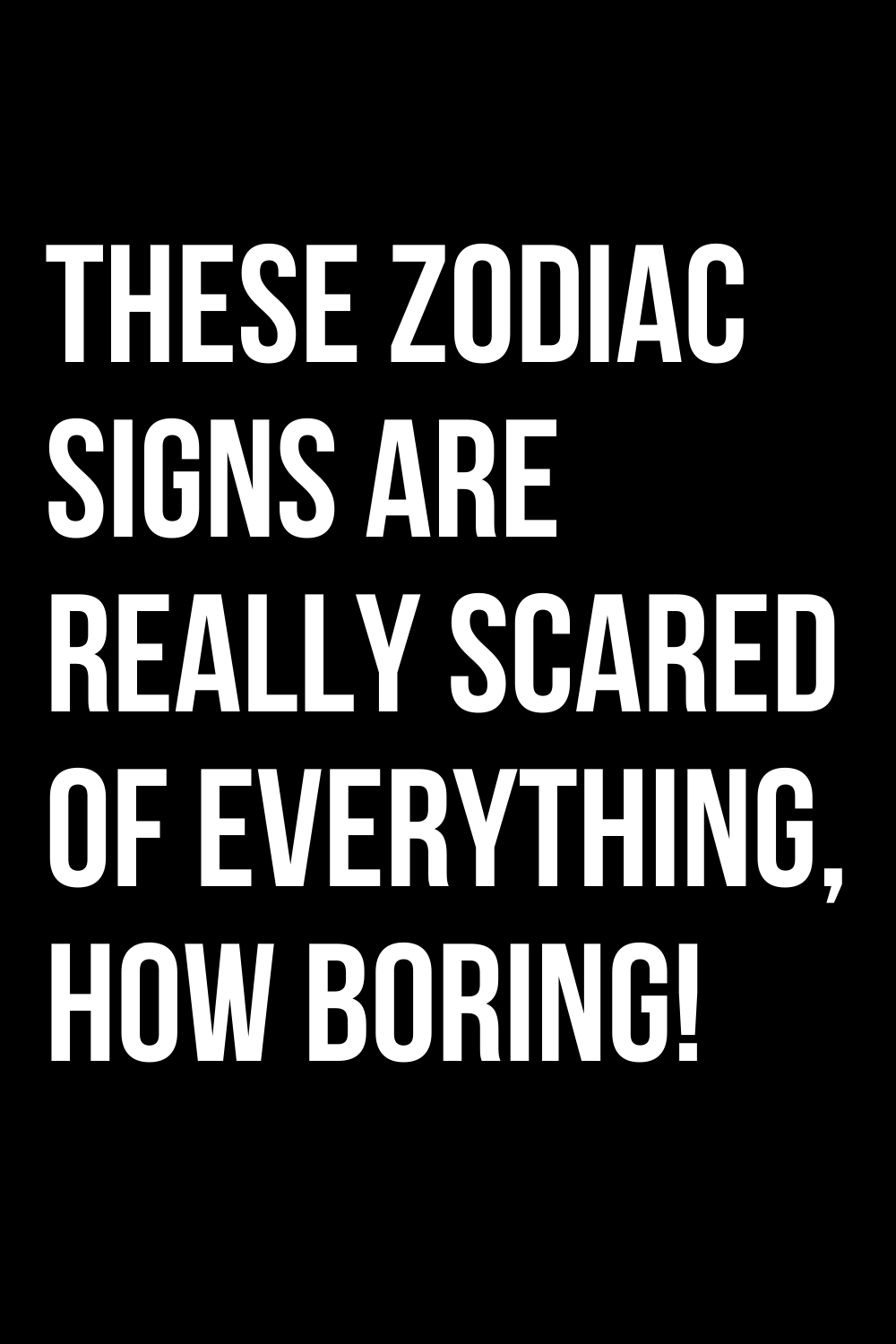 THESE ZODIAC SIGNS ARE REALLY SCARED OF EVERYTHING, HOW BORING!

Hey, aren’t you by any chance part of the ranking of the five scariest zodiac signs of the whole horoscope? Let’s find out now!

Knees shaking, teeth chattering, chills, and unmanageable screams: no, you are not on the top of a mountain but simply in the company of an extremely fearful person!

We all know someone with whom you can’t even watch a horror movie or who is afraid even of their own shadow. Of course, being afraid is not only normal but also something that we absolutely cannot manage: it is a natural reflex that, over the years, has helped us to survive! There are some people, however, who exaggerate: fortunately, however, the horoscope can help us understand what they are!

The scariest zodiac signs of the whole horoscope: find out if you are also one of the cowardly zodiac signs

Yes, there are also cowards in the world and we decided to try to unmask them.
Let’s be clear: there is nothing wrong with being afraid, especially if you find yourself in a situation that seems dangerous or disturbing to you.
But there is a limit to everything: it’s okay to be afraid of walking alone at night but  Michael Jackson’s Thriller video can’t reduce you to a shaking jelly!

Okay, okay, we know: it is useless to judge others for their fears as ours could be ridiculous in the eyes of others.
(The writer, for example, is not terrified of insects, even the smallest ones. Let’s not talk about very high waves: they don’t scare us, really not at all!).

Let’s find out immediately which are the five scariest zodiac signs of the whole horoscope: we cannot guess their fears but we can tell you how impossible it is to deal with them!

Seems rather odd to find Gemini on today’s chart, right? Everything may seem like Gemini less than fearful or frightened!
We have to tell the truth: Gemini, under that light-hearted charm that they show so often, can be truly fearful.

Fear is what drives them to take decidedly breaking choices: Gemini is quite fearful but of normal things! The family, the stability … as soon as you start talking to them they would scream!

Pisces is also generally very fearful people. Sensitive and delicate as they are they have a tendency to close themselves towards the new that makes them tremble when they are forced to take a step outside their comfort zone!

Pisces are people who have a marked tendency to ” lie ” about their life: they live in fear that someone may discover that they are not as cool as they pretend to be!
Better be careful with them: fear can be a strong deterrent and they may stop dating you!

Dear Cancers, there is nothing wrong with admitting that you can be a real coward when you commit!
Cancer is divided into two types of fear: the first is that which concerns their loved ones and everything that could happen to them. Cancer trembles with terror when you tell them about it!

The second is that which concerns his life: Cancer can imagine terrifying scenarios, thanks to a real reserve of terrifying thoughts that it stores in the brain!
It almost seems that Cancers like to spend hours and hours terrorizing themselves: who knows if that’s the case!

To those born under the sign of Libra, we assign a second place in the ranking of the scariest zodiac signs of the horoscope. The reason is easy to say: Libra is a sign terrified of loneliness and, therefore, cannot help but tremble every time he is alone!

Let’s understand: it’s not that Libra isn’t able to have coffee by herself at the bar, it’s just that the idea makes her sweat cold.
For this reason, then, Libra often lives a dichotomy: she is nice and kind even with people she hates, with the fear that she could cut off bridges and find herself alone!

The terror of Libra is this: she never wants to be alone and therefore surrounds herself with people… even people she hates!
Dear Libra, but wouldn’t it be better to try to do something about this fear and live… without false ” friends “?

Taurus: first place in the ranking of the scariest zodiac signs of the horoscope

Yes, dear Taurus, it is you who “win” first place in the ranking of the scariest zodiac signs.
You know very well that you are extremely fearful people, capable of going into crisis in the face of even the smallest choice!

The Taurus is afraid of both making a decision and not making it. He is afraid of the consequences of an action or the lack thereof and … in short, we understand each other.
If there is something that you think might frighten the Taurus, don’t ask yourself too many questions: he scares him, it’s practically certain!

Nervous as they are, those born under the sign of Taurus end up truly quivering puddings in the face of even the smallest question or assumption of responsibility.
Now that you know this, be careful when talking to them!