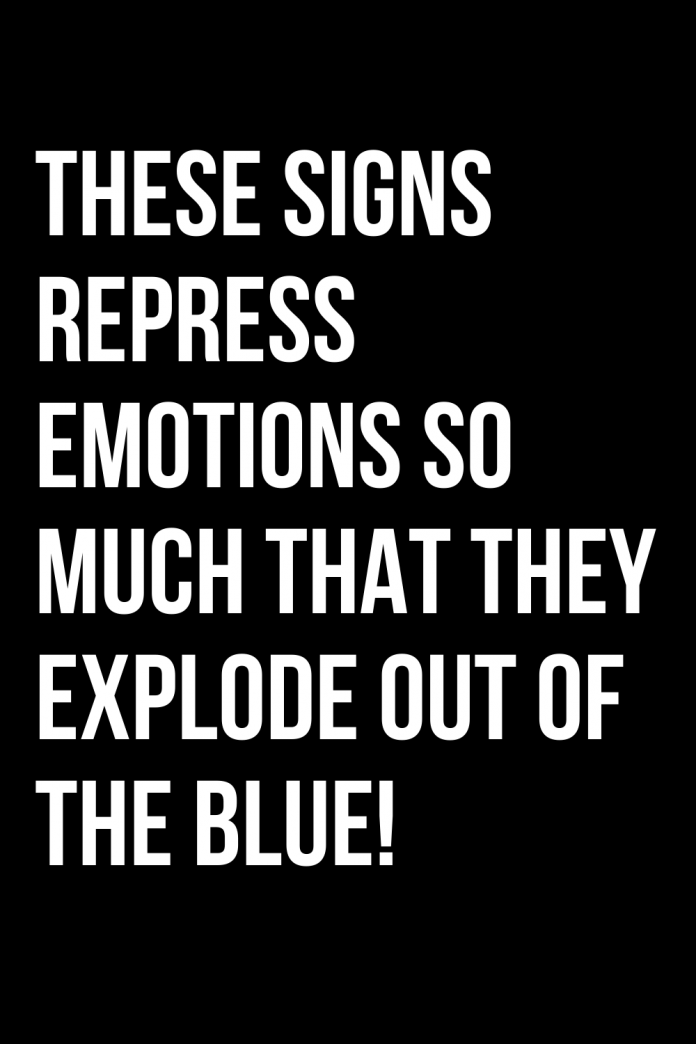 Are you one of those zodiac signs that repress emotions? Let’s find out right away with our today’s horoscope ranking: who knows if you are not among the top positions?

When it comes to feelings , you are completely speechless. Not because you don’t have any, indeed you are practically full , but because you have never learned to express them verbally.
Sometimes you don’t even realize that you are so unaware of your feelings that, when you happen to experience any, you are absolutely surprised .
And who knew that you were hiding so many emotions inside you ?
Today we decided to ask the stars and planets to help us find out who all the people who are really out of touch with their feelings… until they explode. Do you think you are in the rankings?

Maybe you are one of the zodiac signs that always repress emotions or maybe it’s your boyfriend, used to blurting out after months of silence.
Worse still: maybe you are both in today’s ranking of zodiac signs and, therefore, a fight between the two of you is tantamount to the eruption of two volcanoes .

Help!
No, come on, don’t despair: after all, you haven’t read the ranking of the five zodiac signs that always repress emotions . Maybe there is neither you nor your partner among the zodiac signs who are genuinely unable to express an emotion until it’s too late! Let’s find out the first five positions right away (and keep your fingers crossed, please).

Dear Pisces , it is useless to pretend to be stupid: often and willingly you just pretend that your feelings do not exist and trample them beautifully!
The reasons why you behave in this way are numerous and all more abstruse than each other.

What is certain is that Pisces are used to trying to suppress their emotions because, often, they are told that there are far too many.
What happens then? Simply that Pisces , at a certain point, burst out: whether it is love or anger is to be discovered!

That those born under the sign of Libra are people who repress emotions might seem really strange at first.
How is it possible that Libra is so poorly capable of expressing what they feel?

You must remember that Libra is a sign that tends to always want to make everyone happy and this means (often and willingly) repressing one ‘s feelings to make room for those of others.
It is no coincidence, then, that Libras explode (literally) after repressing their feelings for years and years!

Yes, dear Aquarius , you are also in today’s ranking.
But are you really one of those zodiac signs that continually repress their emotions ?
The answer, unfortunately for you, is yes: at least until you really can’t stand it anymore!

Aquarians are used to enduring and supporting. They go out of their way for the others and gulp down many bitter morsels before reaching the point of “no return”.
When an Aquarius explodes you can rest assured that everyone will hear it: be careful with them!

For Capricorns , being in second place instead of first in our ranking today is practically already a milestone.
You know very well, in fact, that the criticism that the people around you move the most is precisely this.

But where are your feelings?
Being one of the zodiac signs that always repress emotions does not mean living without feelings but pretending not to have any day and night .
And you, dear Capricorns , are true masters in this!

Capricorns do n’t like to think they are a slave to their feelings. But when even a little discussion can make them tremble with anger , problems with emotions suddenly become something to deal with immediately.
Dear Capricorn , if you only listened to your feelings  before they take control of you, you would save yourself a lot of trouble!

Scorpio: first place in the ranking of zodiac signs that always repress emotions

Dear Scorpio , you certainly could not expect not to be in today’s horoscope ranking.
We must say, however, that your first place amazes us particularly: but is it possible that you are so little in touch with your emotions?

Scorpios are generally people who don’t care too much about their feelings. They have other things to do, a thousand commitments and goals to extricate themselves from: they can’t even think about how they feel, come on!
This means that, often and willingly, Scorpios are people who explode, out of the blue, to the surprise of everyone (and the Scorpios themselves).

At least we will not find them in the ranking of emotionally unavailable zodiac signs : the emotions of Scorpio are there, they are just really explosive!
Dear Scorpio , if you are not also among the signs that you always find yourself with a broken heart , we invite you to pay attention to your feelings. Don’t make others pay for your little desire to face emotions!