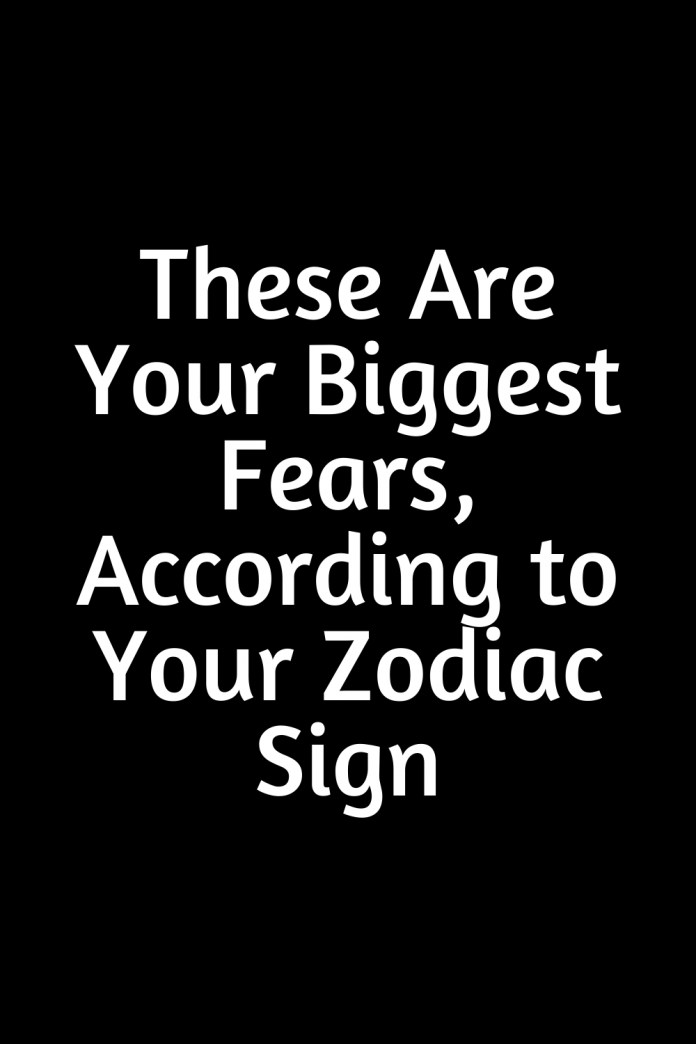 Learn how to make peace with your biggest fears and use them for your own benefit, no matter what your astrological sign.

Aries loves to be the Alpha, so naturally, the idea of someone challenging their authority or their abilities greatly distresses anyone born under this sign. “Aries fears being wrong more than anything or being told what to do if what they are told is incorrect or inconsistent with what Aries knows to be ‘right,’” says Athena Perrakis, PhD of Sage Goddess. “This is a black-and-white sign, with a low tolerance for ambiguity.” Aries are very clear and concise, like a general leading his troops into battle; if they are made to second guess themselves, their whole sense of confidence and power could fall apart. But in this world, no one is ever right 100 percent of the time. So Aries will have to learn to understand this and to make adjustments within themselves. “This fear becomes a gift if Aries can use it to learn that being right isn’t always what is most important.”

Taurus is very adept at handling finances, so when something unexpected befalls this sign, like the loss of a job or car troubles, it makes them very uneasy. “Taurus fears poverty or the inability to pursue their life’s goals and dreams,” Perrakis says. “For Taurus, the dream of what they hope to become is critical to their happiness; they have to believe that dreams can come true, no matter how old they are.” While other signs might be better at taking risks, Taurus prefers walking on stable ground. They may be too afraid to put themselves out on a limb in order to achieve their dreams or greater financial success. But if they learn to trust their intuition, these fears will not be as debilitating.

The worst thing for a Gemini is to get stuck in a rut or a monotonous routine. If life slows down, they begin to feel trapped. “Gemini fears silence and stagnation,” explains Perrakis. “This is a sign that likes to stay moving, keep learning, and expand into new experiences in life as proof that they are growing, evolving, and achieving.” When a Gemini gets stuck in life’s doldrums, they begin to feel antsy and desperate, like they’re doing something wrong. But life isn’t always on the fast track. That’s just a fact that Gemini has to learn to accept. “This fear becomes a gift if Gemini can see that reflection is sacred, and that times of stagnation and reflection actually lead to deeper and more meaningful growth down the road.” Here is your ideal vacation, based on your zodiac sign.

Even the most independent of Cancers has the deep need to be surrounded by people. Cancers will go out of their way to make sure their calendar is filled with visits with friends and family. And that’s not just because they like to socialize; it’s because they don’t want to meet their worst fear. “Cancer fears being alone,” says Perrakis. “For Cancer, partnership, love, marriage, and family are sacred above all things, so Cancer worries that they will end up without these connections.” For Cancer, the thought of not succeeding in their personal relationships or not having a close-knit network is unacceptable. While there’s nothing wrong with having a wealth of family and friends that love you and spend time with you, it would behoove a Cancer to take time to themselves now and again. The only way to get over a fear is to get better acquainted with it. Cancers have to learn that they are not void of love if no one else is around; it comes from within.

Leo loves the spotlight, which also means that Leo loves praise. If a Leo doesn’t get the attention or the approval they want, it could send them spiraling. This sign’s worst fears are to under-perform and to let people (including themselves) down. Their personal identity, including their confidence level, tends to be located entirely outside themselves. They take in other people’s opinions as their own. But this can be a valuable lesson for Leo. “If Leo can recognize that they don’t need others to validate what they know or can do, they will thrive,” Perrakis says. “Their power really emanates from within, like the energy of their ruling planet, the Sun.”

Virgo is a perfectionist in all aspects of life, including relationships and work. The worst feeling for a Virgo is feeling like they’ve failed or aren’t good enough. Rejection really hits this sign hard. Perrakis says, “Virgo fears being unneeded or being unable to serve in some capacity critical to the success of others. After all, Virgo is here to lead a life of service and gains much of their self-esteem from their acts of service and devotion to others.” If a Virgo isn’t living up to their own personal expectations of themselves, they can easily succumb to anxiety and depression. Virgos define themselves based on what they’ve accomplished, but that’s not always healthy. “This fear becomes a gift if Virgo can see that it’s more important to be than it is to do in life. This recognition frees Virgo to focus more on inner development than external achievements.”

Libra is a very easygoing sign that thrives under and strives toward balance. Anything that threatens to throw a Libra’s life out of order is definitely cause for fear. Really, what Libra fears most is, to quote Franklin Delano Roosevelt, fear itself. “Libra fears hard extremes, as this is the sign of diplomacy and balance,” Perrakis says. “In fact, no other sign quite embodies the balance of Divine Masculine and Divine Feminine like Libra! If Libra sometimes lets go of their need to reconcile all the energies around them, they will do better in life. Swinging too far in one direction or the other is often a learning experience in itself.” Life will have its ups and downs; the pendulum will always swing. As everything is constantly changing, Libra has to come to terms with the fact that they will not always be in a state of peace and comfort. However, they can take action to create stability in their lives. This is your most attractive trait, according to your zodiac sign.

Many people are afraid of showing their true selves to others, but none so much as the Scorpio. “Scorpio fears being exposed completely, for inside every Scorpio is a certain darkness that overwhelms even them,” Perrakis says. “Scorpio is the darkest sign of the zodiac because they are unafraid to explore the dark caverns of the soul—theirs or anyone else’s.” While Scorpios have a wide emotional range, they don’t like sharing their deep thoughts with others for fear of being perceived as weird or depressing. Oftentimes, Scorpios believe that no one will truly understand them, so they shut people out. But life isn’t perfect for anyone. A Scorpio will grow immensely as a person when they figure out that they can relate to others’ experiences.

Sagittarius hates to be stifled and controlled. Like a true rebel, Sagittarius doesn’t like to follow other people’s rules or feel like someone is getting in their way. They fear that their dreams and goals won’t end up becoming reality because someone or something opposes them. “This is the sign of travel and wanderlust, so the worst thing that can happen to them—from their own perspective—would be the loss of the freedom they hold so dear,” Perrakis says. While this sign gets cabin fever like no other, it is good for a Sagittarius to take the time to appreciate their home life and their local culture.

Capricorns are essentially the kid in school who freaks out over not getting an A+ in math class. Above all, they fear feeling small and unsuccessful. If they don’t get that promotion they’ve been working toward, they may utterly collapse. “Capricorn fears a lack of achievement or success, since Capricorn’s life purpose is often related to their professional advancement,” Perrakis says. “They are here to make it big, and they know it!” Capricorns don’t want to be just another cog in the machine; they want to run it. While the fear of not succeeding can motivate a Capricorn, it can also prevent them from making the necessary moves to achieve what they want. Capricorns need to learn that their meaning and worth isn’t solely based on work performance.

Aquarians don’t want to be just another sheep in the herd. Their biggest fear in life is not being some kind of revolutionary. This sign wants to stand out and be known for its individuality. They want to raise eyebrows and they want to make changes. They are scared by the idea that they might end up being just like everybody else and not making a difference. “This fear becomes a gift when Aquarius learns that they are already different. They don’t have to work at it,” Perrakis says. “Their difference is a natural extension and expression of their own personal creativity.”

Pisces is the biggest idealist of all the zodiac signs. For this sign, reality itself can be something to fear. The responsibilities of life weigh heavily on Pisces. They fear having their ideas and creativity suppressed. “Most of all, Pisces fears not being loved or understood in a world that often seems cold and calculating,” Perrakis says. Pisces is kind of like the wandering artist who is afraid of being put down by “the man.” They may spend much of their time avoiding people who aren’t like them and who give off negative energy. But the role of a Pisces isn’t to give in to negativity and fear; it is to overcome it. Pisces will be the one to brighten someone else’s outlook on life and make the world a more enjoyable place.