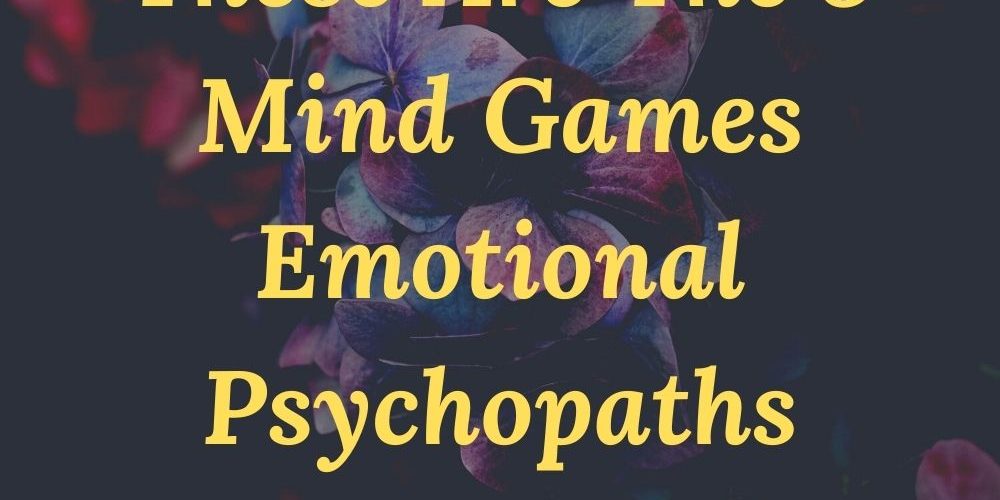 These Are The 5 Mind Games Emotional Psychopaths Play On Women

We all like to think that we are unique. But, what we usually forget is that we are all human, as well.

These things can happen to anyone—no matter how special and unique they are.

Usually, women who were victims of mind games in a relationship weren’t aware they were being abused. And that is completely normal.

Being in that state of infatuation and so-called love, most women don’t get that some things shouldn’t be the way they are.

Even if they see something is wrong, they will let it slide because they think they are in love with that person—that emotional mind-playing psychopath.

That’s why it’s important to have an objective perspective of your love life. Of course, due to your head-over-heels-in-love state, you are unable to think straight.

As far as your relationship and coping with it are concerned, you need support from your friends and family or a professional.

It is impossible to write all the mind games that people play on each other because every couple is different and therefore, they act differently.

However, there are some of the most common mind games emotional psychopaths play on women. If you’d like to know more about the patterns of their behavior, I suggest you check out my new book here.

Gaslighting is a psychological term defined as:

“A form of emotional abuse where the abuser manipulates situations repeatedly to trick the victim into distrusting his or her own memory and perceptions… [The term is derived] from the British play turned movie, ‘Gas Light,’ where a husband attempts to drive his wife crazy using a variety of tricks causing her to question her own perceptions and sanity.”

Every time he wants something from you, and you are not ok with it, he makes you feel guilty. He literally blackmails you with emotions.

For example, if he wants money from you and he asks for it all the time, the first time you say ‘no’, he will guilt-trip you.

This is not just a mind game. It’s also emotional and mental abuse.

Your psycho boyfriend will threaten to leave you for every little thing. And since you are in love with him, you won’t and don’t want that to happen, so you cave in.

Be aware of the fact he knows that, too well.

He knows he is going to get what he wants because he is sure you love him and you will listen to him.

Also, there are a lot of times when he will threaten to hurt you or your family. This is real emotional—bordering on physical—abuse.

A lot of women will give in and do what he says out of fear. Don’t be one of them!

If you ever caught your psycho boyfriend in a lie and found the courage to confront him, I
know he came out of it as a winner.

You see, emotional psychopaths will somehow change the topic through your conversation—whether with an argument or sweet talk.

In the end, you will be fighting or talking about something completely different than what you were started to talk to him about. That’s one of their mind games.

They are ‘beautiful liars’

It is commonly known that emotional psychopaths are smooth liars. They lie all the time but with such skill and sweet words that you don’t even see it coming.

Even if you catch them lying, they will remain cool under pressure.

They will tell you the most unbelievable stories and you will buy them.

Also, as mentioned before, they know how to distract you with their charming words.

Now, that you’ve read some of the mind games emotional psychopaths play on women, don’t stay delusional if it’s happening to you.

Don’t lie to yourself because you won’t be able to lie for much longer. Release yourself from the pain he’s causing you and just leave him.