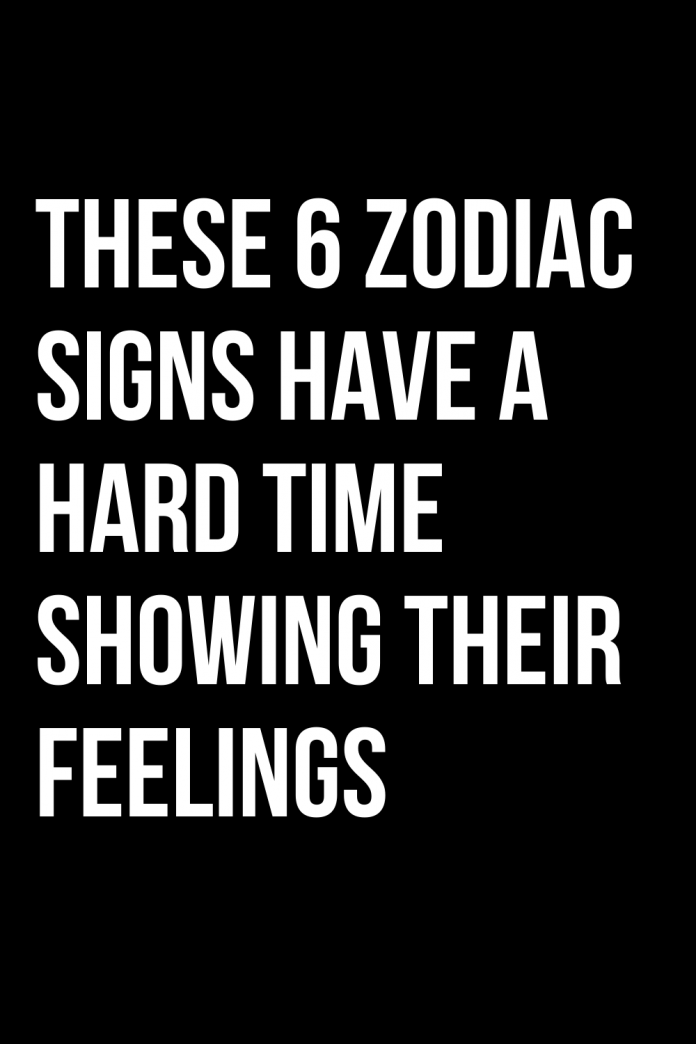 Our emotions can be scary at times, making us feel like we are no longer in control of our lives.

Empathetic people who are naturally warm, caring, loving, and kind are able to express their feelings and concerns about the well-being of other people.

On the other hand, there are people who have difficulty expressing their feelings openly and who prefer to keep their emotions to themselves.

They find it pretty scary to be so vulnerable and powerless and want to protect themselves so that they are more likely to appear emotionless.

Because of certain personality traits, some zodiac signs seem to have difficulty revealing their emotions.

They find it difficult to open up. This is why they internalize their feelings and hope that if they ignore them, they will go away. However, emotions rarely go away.

They can be swept under the carpet, but at some point they come to the surface and cause a lot of damage.

It is difficult for these 6 zodiac signs to show their feelings and to open up to those around them.

Taurus is an earth sign that is very loyal, patient, and hardworking, always looking for comfort and possessions.

Taurus-born are known for their stubbornness and they cannot and will not change.

They are also very ambitious and materialistic and if someone gets in the way of their success or possessions they will be utterly cold and unemotional with them.

When it comes to their own emotional world, they like to show a strong character, but actually they are sensitive and hide their true emotions.

The Virgo is very meticulous, analytical and hardworking. They are very rational, practical and logical and need to feel like they are in control.

That’s why they plan everything in advance and even down to the smallest detail so that they appear strong and confident. But the problem with this is that they can completely forget to be in touch with their feelings.

When they feel hurt or betrayed, they will suffer in silence and prefer to keep their feelings to themselves.

This earth sign keeps its emotions to itself and does not think much of outbursts of feelings because it does not want to reveal their innermost being.

Scorpio is a watermark known for its passion and intensity. The only downside to this is that their intensity can make them hostile.

When a Scorpio feels hurt, they become extremely cold-hearted and seek revenge at all costs. They become manipulative, cold and try to find out all the weaknesses of their counterpart and strike when you least expect it.

Scorpios are also known to be extremely mysterious. They use their charm and passion to hide all of their weaknesses and secrets.

You can have a lot of bodies in the basement and no one would notice. They like to leave the impression of being unemotional and tough in order to protect themselves.

Feelings are just not her thing. They do not need to communicate their emotions to their fellow human beings and they need a lot of time before they can finally gain confidence in someone.

Instead, they form a wall around themselves and prefer to observe other people and their approach than to deal with their own feelings.

This fire sign is very ambitious, life-affirming and cosmopolitan. The only downside is that they can get too self-centered because of their ambition.

They are too preoccupied with their own plans, goals, and success.

Even when they do communicate with you, they are mostly interested in talking about themselves and what is going on in their life rather than being interested in someone else.

They are always in a good mood and open to new adventures, so they don’t have time for unnecessary expressions of emotions.

They stay away from all emotions and conflict and rarely feel the urge to open up to someone.

Since career goals and work are a huge part of a Capricorn’s everyday life, they believe that feelings are just a waste of time.

This is why they are often accused of having no feelings. But the truth is, they just can’t speak openly about them.

They are reluctant to look into the cards and do not feel the urge to open up. They think that it is better to be stoic and callous than constantly expressing what you are feeling.

Capricorns tend to hide their insides and suppress their emotions. Should Capricorn’s emotions come to the surface, Capricorn will push them back down.

If you do have a chance to reflect on your feelings, they will analyze everything in great detail. It takes a lot for people born in Capricorn to recognize their emotions and take them seriously.

Aquarians are very unconventional, freedom-loving, and reckless. You are prone to intellectual ideas and original ideas.

The disadvantage, however, is that they are not very good at handling emotions and prefer to isolate themselves.

It’s not that they’re insensitive or lacking emotion, but that their logic and intellect are more of their strengths.

They feel very uncomfortable when someone reveals their core to them and they don’t want to hear about all the painful things that are going on in someone’s life.

Instead, they will ask the other person to change the subject.

They are proud of their intellect and their logic, but they have one weakness: their emotional behavior.

They would rather be aloof and solve their own problems than take the risk of sharing their vulnerability with someone.