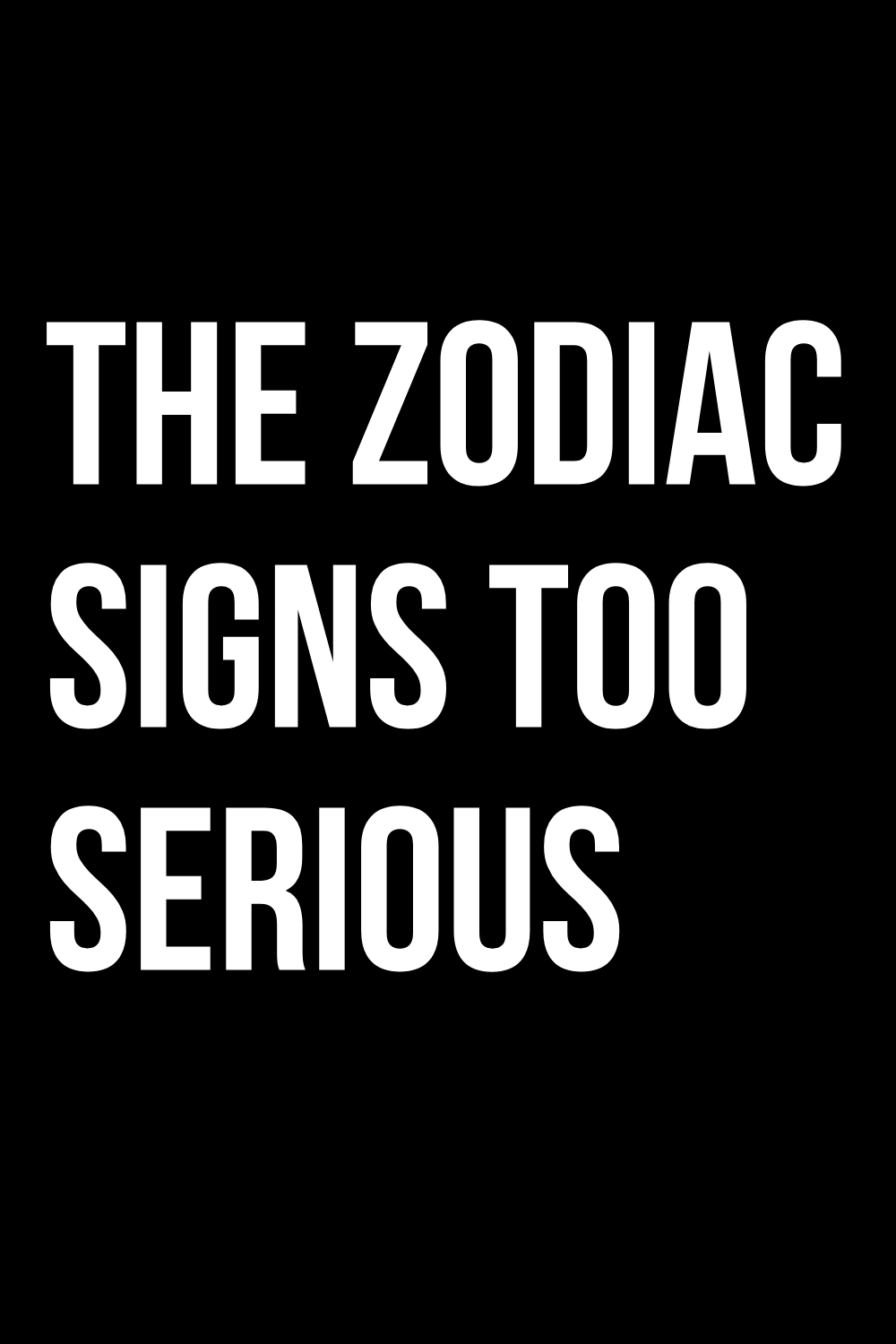 THE ZODIAC SIGNS TOO SERIOUS

Find out which are the most serious zodiac signs of all and which are not at all.

Each of us is a set of ways of being and doing that when mixed give shape to the personality and to a way of being different from that of all the others. An aspect that is often difficult to grasp and which is made up of many shades that can vary according to the situation or, more simply, over time. Among these, there is the seriousness that if in some ways it is important data to have some control over one’s life and also obtain favorable feedback from others when it is extreme it can represent an obstacle both in the ability to interact with others and in the chance to be happy. For this reason, today, after having seen which are the zodiac signs that know how to love and which are the signs of the zodiac who know how to enjoy life, we will find out which zodiac signs are too serious and which, on the other hand, are not at all. Since this is a way of being linked to the deep, it is also important to check the profile of the ascendant to get a clearer idea of ​​the situation.

Aries – Those who are not serious
Those born under the sign of Aries do not like to take things too rigidly and for this reason, they rarely show themselves serious, unless they are focused on something or feel in competition with someone. . For the rest, they prefer to live peacefully and in harmony, getting along well with everyone and creating a relaxed environment both for them and for the people they know. Lively and always ready to take things with enthusiasm, they are mostly jovial enough to try to tone down when others are too serious. For this reason, they can make many friends and always get along with everyone.

Taurus – Those who know how to be serious when needed
The natives of Taurus try to live life in the most relaxed way they know, being essential for them to feel calm and always in a good mood. For this reason, the way they appear most frequently is jovial and relaxed. When they feel that things need another approach, however, they don’t struggle to change ways, suddenly appearing serious enough to give the idea of ​​being like this 365 days a year. We can therefore say about them that they contain a lot of seriousness but that they prefer to try to keep it aside only for the situations in which it is needed, living more lightly those in which, instead, they can put aside all deserve to live peacefully.

Gemini – Those who are not serious at all
Those born under the sign of Gemini are people with a cheerful disposition and even when they tend to have bad moments (which happens quite often) they end up showing alarm, worried at times even theatrical but never extremely serious. This way of doing them always makes them the soul of the group and people that people love to hang out with because they are always able to put everyone at ease and to give a smile when needed. Of course, a more serious approach to life would allow them to have a few more mood swings and appear more stable in some ways. If you think, however, of the fact that their being out of the ordinary depends on this precarious balance and on how they manage it, perhaps their lack of seriousness is to be considered a good.

Cancer – Those Who Are Serious When They Are in a Bad Mood
Even natives of Cancer are difficult people to interpret when it comes to seriousness. If in everyday life they like to appear sweet and vulnerable, when they feel attacked or decide that someone is not on their side, they tend to become extremely serious, to the point of making anyone feel uncomfortable. This ability to change the way they show themselves to others is often useful in the workplace where they can give their best by appearing more professional than many others. An appearance that with frequency tends to give way to their true way of being seen that in the long run, they cannot keep themselves constantly serious, showing a much more multifaceted character and tending to variations of all kinds.

Leo – Those who know how to be too serious
Those born under the sign of Leo are used to taking life head-on and, thanks to the many experiences they have acquired, they always end up appearing extremely serious, especially when they find themselves in situations in which seriousness can be a good way to get what they want most. Always projected on themselves, they love to appear jovial, which is why they show themselves as cheerful and easy-going as possible. However, when they believe it is better to assert themselves, they know how to change ways immediately becoming very serious and maintaining this attitude as long as they deem it necessary. This way of doing them often makes them decidedly different based on the environments in which they frequent them and which usually see them self-confident in the private sector and very serious and unapproachable at work.

Virgo – Those too serious
The natives of Virgo always show themselves to the world with such a serious air as to create a sort of unease in those around them. This is due to the innate distrust they have towards everything and everyone and which leads them to never give too much confidence to those they do not know. An aspect that they experience extremely at work where unless they get to know someone, they always tend to appear distant. Often their way of doing it suggests that they are in a bad mood or upset about something but it is enough to know them a little to understand that it is mostly a mask that sometimes they just struggle to take off. In fact, among relatives and friends (assuming to consider them intimate) they appear much more relaxed and available.

Libra – Those who are serious only when needed
Those born under the sign of Libra love to relate to others serenely. For them, life must be lived in extreme serenity, and because of their constant search for beauty and harmony, they are the first to not appreciate the rigidity given by a serious attitude towards things. Nonetheless, they are far-sighted people and if they realize that more seriousness must be applied in a certain context, they do not hesitate to put it on the field, giving the best of themselves to the point of appearing so natural that they struggle to imagine them in other ways. This happens because the natives of the sign always aim for the best and always love to get what they want by using the weapons they deem most appropriate from time to time.

Scorpio – Those who have a certain basic seriousness
The natives of Scorpio tend to take life very seriously and this way of doing them makes them very serious people. Nevertheless, they also love to put those around them at ease, and for this reason, aware of how they appear, they often tend to play down to avoid unnecessary tension. If they are in a bad mood or in a situation that they consider thorny or at risk, this is why their underlying seriousness tends to emerge making them appear more serious than ever. We can therefore say of them that they are among the most serious signs of the zodiac but that they always know how to manage it, showing themselves as they prefer from time to time.

Sagittarius – Those who are not serious at all
Those born under the sign of Sagittarius do not like to appear serious and hate anyone who does, labeling people as heavy. Ironic by nature and always ready to have fun, they consider seriousness an element that can be dispensed with in every sector, including the work one. This way of seeing things often creates various problems for them, leading them to behave differently from how others expect and therefore receive criticism. Nevertheless, their thinking does not change and this makes them fully part of the less serious signs of the zodiac.

Capricorn – Those who are serious only when forced
The natives of Capricorn do not particularly like seriousness but when they find themselves in front of someone who shows themselves in this way they tend to change their way of being by becoming serious themselves. This helps them to integrate perfectly both at work and in interpersonal relationships, guaranteeing positive feedback from the people they deal with. We can therefore say about them that although they are not people born to be serious or inclined to be serious, based on the circumstances they manage to change so much as to confuse those in front of them. Which works most in the workplace.

Aquarius – Those serious but only
superficial Those born under the sign of Aquarius do not particularly like interactions and for this reason, they try to avoid being sociable with those they do not know well. This leads them to appear serious even if there aren’t many basic ones. Although aware of this, they tend not to change their attitude to avoid arousing sympathy in people with whom they do not want to interact. Their attitude is therefore facade, albeit so credible that it works great, at least with those who do not know them enough to understand when they are pretending.

Pisces – Those Who Appear Serious Based on Emotions
The natives of Pisces are deep people and this, although they are always jovial with everyone, can sometimes make them appear more serious than they are. When they realize it, they try in every way to put the people around them at ease, playing down and trying to appear as carefree as possible. Having said that, if in life it is considered necessary they know how to be serious but they tend to give in to this way of doing only if practically forced. We can therefore say of them that they have a seriousness of mind that makes them in any case sociable and easy-going and that can become more evident only when they feel overwhelmed by unpleasant emotions.