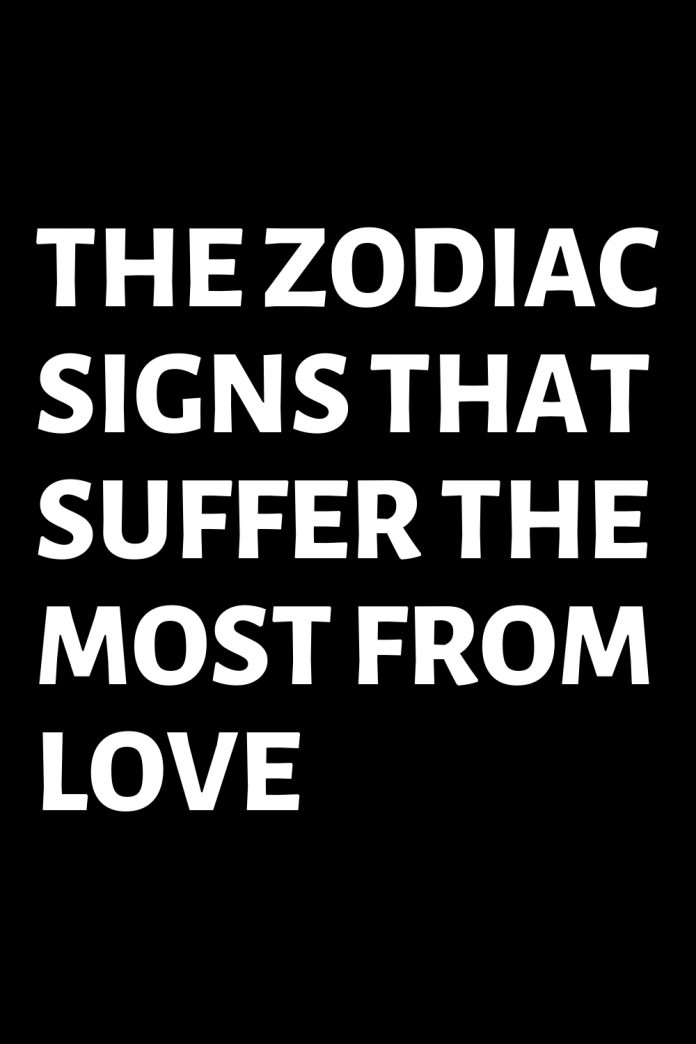 Find out which are the zodiac signs that recover less easily from the end of a love.

Love, as we know, is the most complex feeling in the world. Difficult to manage and unpredictable by nature, it leads people to change in unimaginable ways. Described for centuries by poets and authors, sometimes this feeling is so great that it can perform real miracles. Like everything, however, love also has a more shadowy side of the coin, a side linked to the suffering that can lead to losing something so precious. Every day, for example, there are couples who are formed and many others who separate and among the latter, often and willingly, there are people who struggle a lot to recover and go back to living normally. Beyond the scope of the sentiment and experience of each of us, one of the factors that lead us to better overcome the end of a story is linked, at least in part, to the influence that the stars have on us. For this reason, today, we will discover together those who are struggling to recover from the end of a love story.

Taurus – Those too attached to what has been
Taurus natives have a hard time leaving a love story behind. Anchored in the past, they love to live in memories and even in front of a door closed forever, they end up getting stuck in a labyrinth made up of continuous regrets. For them, therefore, going forward turns out to be quite difficult and definitely related to the ability they have to get up, heal their wounds and decide to change their path. Their stubbornness, in this sense, is often a negative point that leads them to try several times to recover the irretrievable, losing sight of what they could find in their present.

Gemini – Those who lie to themselves
The real problem of Gemini is not being able to accept the pain, to the point of doing everything to not recognize it. Faced with the end of a love story, therefore, they will never be ready to admit their suffering, striving to appear happier than ever and thus wasting all energy, so much so that they have no resources to heal their heart. A problem that can sometimes make them intractable and that at others makes them appear more fragile than ever. Accepting the help of others, however, would mean having to look reality in the face and this generally happens some time later, when, albeit with difficulty, they finally manage to find the inner breath to allow themselves at least a little sadness.

Cancer – Those who can’t stand distances
The need for love of those born under the sign of Cancer is such as to make them too sensitive at the end of a story. Whether it’s the love of life or a simple infatuation, the very thought of being pushed aside for them is like an obsession that continues to hurt. It’s not unlikely to find them reliving the end of the story from different angles and all just to grasp the actual point of no return. A useless practice which, however, they cannot do without, even at the cost of feeling bad and becoming decidedly heavy for those around them. Fortunately, in the end, pride always comes to save them, which on the other hand leads them to close themselves forever towards those who have stopped loving them.

Scorpio – Those who are withdrawn
Those born under the sign of Scorpio are really difficult when it comes to feelings. For them, the end of a story is first of all proof of a failure which they will bear the weight of, living it as a shame. For this reason they tend to close in on themselves, avoiding talking about it with others and pretending that the breakup never happened. On the one hand, for them, it is a way to protect themselves from pain, avoiding having to give explanations, thus reliving a moment that they consider heartbreaking. On the other hand, however, this forced lack of communication ends up making everything heavier, amplifying the pain they feel and making it somehow more difficult to dispose of.

Aquarius – Those who go on undeterred
Those born under the sign of Aquarius react to a break by forcing themselves to file it even before having processed it. This leads them to accumulate stresses and tensions which sooner or later end up getting so big that they swallow them. For this reason, even if apparently they seem to withstand the blow well, inside they are suffering more than anyone else and the inability to let off steam makes them like time bombs, ready to explode at any moment.

Pisces – Those who don’t get it right
Pisces are among the most romantic of the zodiac, which is why accepting the end of a love story is too much pain for them to bear. This leads them to try to recover things as long as they can, sometimes even creating illusions in order not to admit the bitter truth to themselves. Their pain is therefore so deep that it makes them depressed, making them close in on themselves. A problem that they could at least mitigate if they were able to look ahead instead of what they lost and which, obviously, was not the best for them.