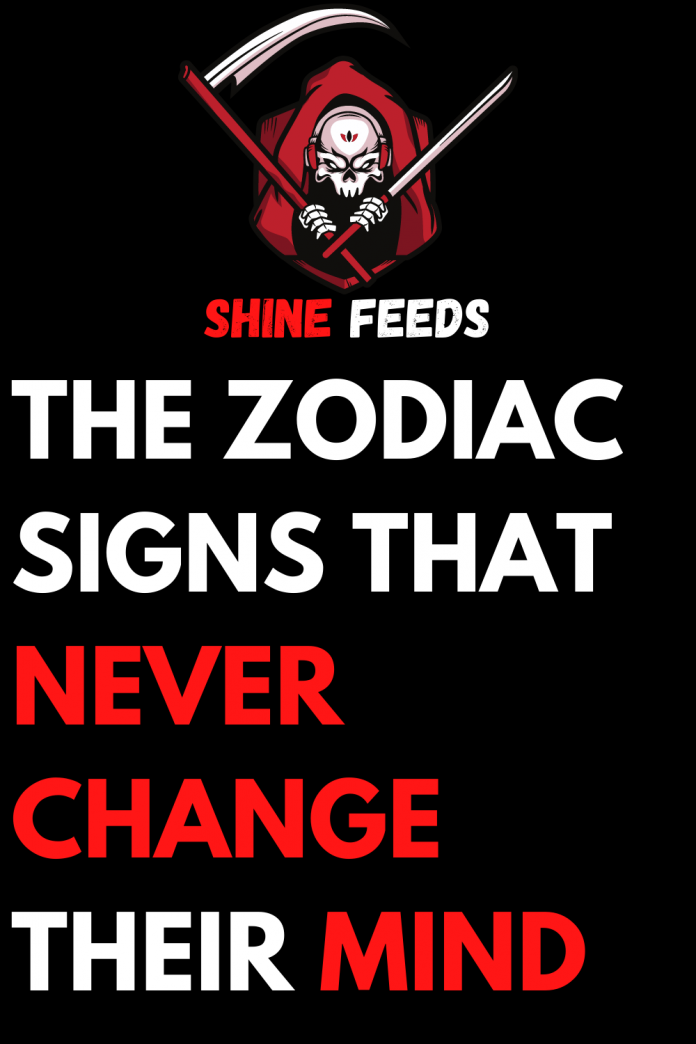 Find out which are the zodiac signs that never change their minds and why.

Each person has ways of doing by which he stands out from the others. Sometimes it is about character sides, others about ways of thinking, and still others about ways of doing that may or may not make a difference. If we talk about an aspect that can be considered positive on one side and negative by others, this is the ability to change your mind. Some signs change it rather easily and others that, on the other hand, never fold.

Which at times can be a sign of a great character and at other times the symptom of a stubborn mentality. Since the reasons that push each of us to never change our minds vary from person to person and often also depend on the influence of the stars, today we will focus on the zodiac signs that never change their minds. And, above all, it’s because they don’t usually do it. Ready to find out?

The zodiac signs that never change their mind. What they are and why.

Aries – Those who change often
Let’s start immediately with one of the signs that are not at all among those who never change their mind. Those born under the zodiac sign of Aries are curious people and tend to be inclined to change. For them to stay fixed on something is never an imperative and if they feel that what they want needs changes they are ready to change their mind. Of course, they are not always ready to admit it to others, and sometimes it can only be discovered by seeing them in action. Nonetheless, they are people who do not stand firm on their positions just for the fun of it. On the contrary, they prefer to change course and thinking if that can help them get what they want more easily.

Taurus – Those Who Only Change It If You Need It
The natives of Taurus are among the signs that rarely change their minds. This depends on their being self-confident and fundamentally stubborn. It always takes some time to get an idea of ​​things, forming an opinion on experiences and facts. Once an idea comes to life, therefore, they are not so willing to change it. If they find that they have done something wrong, they tend to take it and get nervous. From their point of view, changing their minds is indeed a sign of weakness. And for this reason, they don’t particularly appreciate those who do it often. An aspect that should be taken into account when dealing with them.

Gemini – Those who change their minds all the time
Those born under the sign of Gemini are people extremely inclined towards change. This makes them particularly capable of changing their minds. For them, doing so is not a problem. This is why they live every possible variation with serenity, surprising themselves if someone makes them experience it as negative. As they love to vary and always have new experiences, they are more than ready to change their minds. Especially if it means embracing new possibilities. Their way of being is so spontaneous that they hardly understand who acts differently. For this reason, they consider those who are always firm on their positions as rigid people and unable to get involved. I expect that, on the other hand, they know how to implement it without problems.

Cancer – Those who do not change their mind easily
The natives of Cancer, in a completely unsuspected way, are fully among the signs that never change their minds. This, however, does not depend so much on a safety factor as on a stance that they put in place to appear strong and never give it to others. If they can, therefore, they try to stay firm on their ideas, even at the cost of feeling bad. And when that’s not quite possible, they end up making their different thoughts known a little at a time. In this way, they hope to go unnoticed and to make people forget their old thought. That said, when they feel they have no choice and find themselves having to decide between changing openly or going down the wrong path, they tend to prefer the latter out of pride.

Leo – Those who change it without getting noticed
Those born under the zodiac sign of Leo love to appear strong and always firm in their positions. However, if it can help them feel good, they are always ready to back down and come back to their ideas. When this happens, they try not to show it too much, gradually changing their lifestyle or what they have chosen to change. And this is because they do not like being accused of something or that their ideas may be accused of being unsafe in the future. This way of doing things leads them to not always be completely honest, especially at work or in those relationships where there are interests at stake. Apart from that, they are very adept at immediately grasping the possible need for change, demonstrating a careful look at everything that concerns them.

Virgo – Those who don’t change their minds for any reason
Virgo natives are extremely strict people and this leads them to be among the zodiac signs that never change their minds. When they think something they make it known with such force that it is impossible to go back. One thing they are so aware of is that the rare times they have no choice, they end up pretending to always think the same way only to act the other way around. Ironically, they expect others to always think the same way and when they don’t, they tend to accuse them of not being strong enough. A way of doing things that often create problems for them and that arises from underlying insecurity that drives them to be afraid of everything that changes. It is not for nothing that they are among the signs that detest every smallest form of change.

Libra – Those who are willing to change their minds if needed. Those
born under the zodiac sign of Libra they are people who have a relaxed attitude towards life and this makes them particularly able to change their minds. However, this should not be taken as a lack of character or a form of insecurity. They are simply always attentive to what is happening around them. Thus, if they realize that a thought is no longer correct, they do not hesitate to change it and act accordingly. Everything happens with such serenity of mind as to be even convincing, almost as if instead of changing their minds they found themselves carrying out a sort of update. Likewise, they are well disposed towards those who act like them, as long as there are sensible reasons behind them. Which for some zodiac signs, all in all rational, is always very important.

Scorpio – Those who change their minds only if they find it useful
The natives of Scorpio are among the most stubborn signs of the zodiac. This makes them one of those who hardly ever change their minds. A way of being that is not, however, due to a stance. The natives of the sign are simply able to read inside. And they know each other so well that they always know what’s best for them. At the same time, before taking a position they do all the necessary research and that makes their ideas more than sure. Nonetheless, they are also people who constantly keep themselves in the game. Thus, the rare times they realize they have to change an idea, they do it without creating too many problems. Which they also expect from others. To the point of taking it to death if they realize they are dealing with people so stubborn that they do not admit the evidence.

Sagittarius – Those who often change their minds without saying it
Those born under the sign of Sagittarius change their mind very often. There being insecure about their positions (even if they don’t like to admit it) makes them indecisive about their positions. Ironically, precisely because of this insecurity, they almost always end up showing themselves convinced of everything they think. And, even at the cost of appearing inconsistent, they prefer never to show their side. For them, showing a change of opinion means this. Which is reflected in their way of evaluating the people around them. A rather borderline way of doing things that tends to confuse anyone who has to do with them. Too bad they only rarely realize this.

Capricorn – Those Who Don’t Change
Their Minds For Any Reason Capricorn natives are so stubborn that the chances of them changing their minds are very remote. Even at the cost of making mistakes, they prefer to go on their path. Questioning is not their forte. Indeed, it is something that they completely disdain. For this reason, it is very difficult for them to realize that they have done something wrong. And, the rare times that this happens, they prefer to deny the evidence and continue to push their ideas forward. Theirs is a way of defending oneself from the fear of making mistakes and being judged as weak people. And this even if, in reality, most of the time they have problems precisely because of this attitude.

Aquarius – Those who insist on not changing their minds
Those born under the zodiac sign of Aquarius are among the signs that find it hard to change their mind. This is because they are stubborn and lack the desire to question themselves. Unlike others, for them, it is not a question of self-esteem but a way of being due to their always wanting to be right. An aspect of the character that the natives of the sign show especially with people with whom they are in confidence or with whom they feel in some way in the competition. Fortunately, now and then, even they manage to accept the idea of ​​being able to change their mind about something. When that happens, however, they never make it known, letting things come out naturally.

Pisces – Those Who Change
Their Mind When They Want The natives of Pisces are people of great ideas that they tend to keep the same throughout their lives. When it comes to ideas, however, they are always ready to question and change them. In addition to loving the idea of ​​getting involved, the natives of the sign are curious and always eager to learn new things. For them, therefore, changing their minds is only growth. Which they consider valid for non-fundamental things, however. As for values, they do not move even under torture and expect the same thing from those around them as well. Which if it does not happen leads them to reconsider its seriousness. An aspect to always consider when dealing with them.