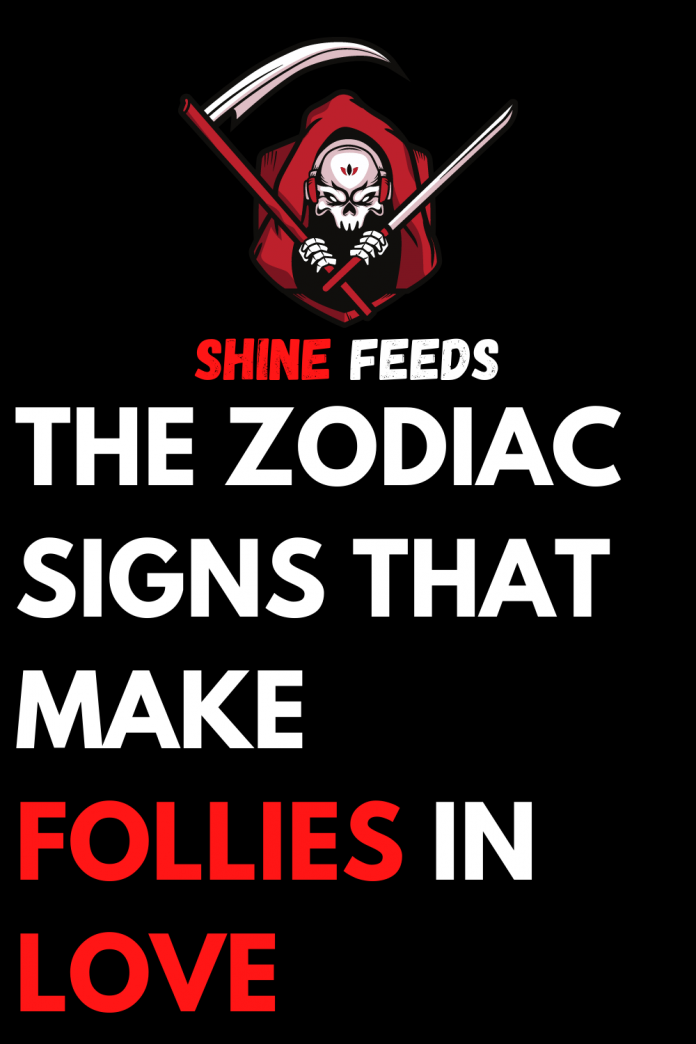 Find out how crazy the various signs of the zodiac are and what is madness that each of them can get to do in love.

Love is undoubtedly the most passionate feeling of all. It is not for nothing that we often hear that when we love we are ready to do folly for the other person. Certain extremes can be both positive and negative and all because when they occur there is rarely the reason but the irrepressible need to act to obtain a result.

Being crazy or not in love can depend on many factors such as, for example, the character, the extent of the feeling you feel, and, last but not least, the influence that the stars have on each of us. For this reason, today we will try to understand what are the craziest signs in love and how they act.

The follies of the zodiac signs in love

Aries – Those extremely insane and too impulsive
Those born under the astrological sign of Aries are extremely impulsive people and always ready to act instantly. This trend, however, is not always positive because coupled with their need to go big when they feel involved, it often pushes them to act incorrectly. And when strong feelings like love are involved, mistakes end up being pretty serious too. Something that the natives of the sign have a hard time dealing with because even in solving things, they often end up doing damage of any kind. Of course, they always have a bit of luck on their side that saves them from irrecoverable situations. However, this does not mean that a little more rationality could save them from circumstances that are not exactly pleasant to live in.

Taurus – Those who rationalize with a certain dose of madness
The natives of the astrological sign of Taurus are people who always ponder everything. This means that even when they push themselves to do crazy things (which often happens), there is some reasoning behind them. For those born with the sign, love is something precious and this means that while managing to live it almost always with a certain balance, they do not disdain freer moments and in which to let themselves be guided by instinct. When this happens, there are no problems whatsoever. And most importantly, any possible “extreme” action is almost always pleasant. Some exceptions can occur when jealousy drives them. Even in this case, however, they almost always end up rationalizing, they always find a good way to remedy.

Gemini – Those who go crazy based on mood
Those born under the Gemini zodiac sign are known to be unpredictable. Constantly moved by impulses that vary according to mood, they end up doing madness of love only when taken. And since these are people who mostly act instinctively when they are in a bad mood, it is likely that their follies almost always have a negative connotation. These are people who manage to rationalize everything positively. The result is therefore to see them often combine some disaster, perhaps because in the throes of a moment of jealousy or because they are upset after a fight. Fortunately, these are always small things that once worked out when successful they manage to put back in place.

Cancer – Those who make reasoned follies
The natives of the astrological sign of Cancer are people who when they love they do it with all their heart. For this reason, they can sometimes push themselves to do outright follies for the person they love. Generally, by always analyzing everything with extreme calm they can make precise gestures dictated by a good basis of rationalization. In some cases, however, they can lose control and exaggerate both positively and negatively. Especially when they let themselves be overwhelmed by emotions, the risk is to see them make exasperated gestures for situations that they would normally be able to manage. It is, however, something they realize. Even if they are out of their minds, once they can think again with a clear head they almost always manage to put things back in order.

Leo – Those who can make real follies
Although it may seem strange, those born under the sign of Leo, when they lose their minds for someone they do it 100%. Thus, although they manage to show themselves extremely rational in every sector, in love they can exceed both positively and negatively. Their need to appear, for example, often pushes them to make big surprises for the person they love. Surprises that try to make them as striking as possible. When they feel vulnerable they can also overdo it in the opposite direction and give their worst. Fortunately, however, this second hypothesis is realized more rarely, leaving them the reputation of people able to surprise the person they love with real folly.

Virgo – Those who are capable of becoming mad in love
Quite surprisingly, the natives of the zodiac sign of Virgo, also known to be the most rational of all, when they fall in love they can lose their minds. This is not something that happens to him often and there must be several preconditions for it to occur. If they are strongly in love, more vulnerable than usual, and prone to some little madness, they can therefore reserve big surprises. This occurs both positively and negatively. And if in the first case they can be extremely pleasant, in the second things change decisively, turning for the worse. Fortunately, their rationality never really disappears completely and in a fairly short time, they usually realize any mistakes made. When this happens, even without ever going so far as to apologize, they always try to find a solution.

Libra – Those who do insanity mediated by reason
Those born under the zodiac sign of Libra are people who love feelings. For this reason, while not substantially changing they’re being moderate people, they often end up wanting a love that makes them crazy. And when they manage to find it, they are always ready to engage in gestures that they would normally consider absurd. However, they always act in a way that never goes beyond what they can tolerate. However striking, therefore, their gestures always fall within a sort of normality that the natives of the sign love to carry out both for others and for themselves. It is after all a form of balance that they care a lot about.

Scorpio – Those with great follies
The natives of the zodiac sign of Scorpio are driven by passion and this makes them capable of extremely crazy gestures. When they are fully involved they can push themselves to important gestures, reserving enormous surprises for the person they love. At the same time, they can end a story without thinking twice. Especially if they are in the middle of a fight or in a moment when they are not fully in themselves. In short, these are people who can give their best and their worst. And all with such emotional strength as to take your breath away. Fortunately, however, they also know how to make up for any mistakes. While as regards the gestures they make to surprise, these are always made in such a way as to be more than pleasing to the person they love.

Sagittarius – Those who rarely exaggerate with madness
Those born under the zodiac sign of Sagittarius are people who when they love do so with all their heart. Nonetheless, they are so self-absorbed that they always manage to maintain a kind of self-control. If we talk about crazy gestures, therefore, it is rare to make extremes. However, this does not mean that they are unable to show love. If they do, they succeed very well but always without exceeding. This means that even if they are sometimes a little cold (at least when compared to other signs of the zodiac) they are also able to give, all in their way and without distorting themselves.

Capricorn – Those who surprise but without great follies
The natives of the astrological sign of Capricorn are so taken with themselves and their things that they never have time to think only and exclusively about the person they love. For this reason, they always manage to keep a little distance from crazy or extreme gestures. This way they do it leads them to appear a bit detached but not so much that they do not seem taken. If they want, in fact, they too are capable of putting in place some small folly for the person they love. And even if they will never be extreme gestures, they almost always manage to impress. Above all, because those who know them well know how much certain gestures if done by them, have an added value.

Aquarius – Those who are rarely insane
Those born under the Aquarius zodiac sign are rarely insane. This depends on their way of being always detached and on the interest they have in themselves and their privacy. Once in a while, though, if the transport they have is really strong, they can go a little further than expected. This means that those who love them will be able to notice some of their little follies. Gestures that, however, in the eyes of others could be completely normal. While aware of this, the natives of the sign never show that they want to change. Indeed, from their point of view, they find it more correct to simply be themselves and find people who can understand them without expecting something more.

Pisces – Those with great follies
The natives of the astrological sign of Pisces are true romantics. When it comes to love they are therefore ready to give themselves 100% and often, in doing so, they end up indulging in some folly. Whether it’s scenic statements or extremely romantic ways of doing things, things don’t change. The natives of the sign, in fact, always know how to positively surprise the partner. At the same time, they know how to be melodramatic when things are not going well, reserving some surprises even in less cheerful contexts. Completely capable of going insane they are at the same time aware of their way of being. And that helps them run for cover when they overdo it. Which they do, even giving their best when they feel so involved that they can’t do without it.