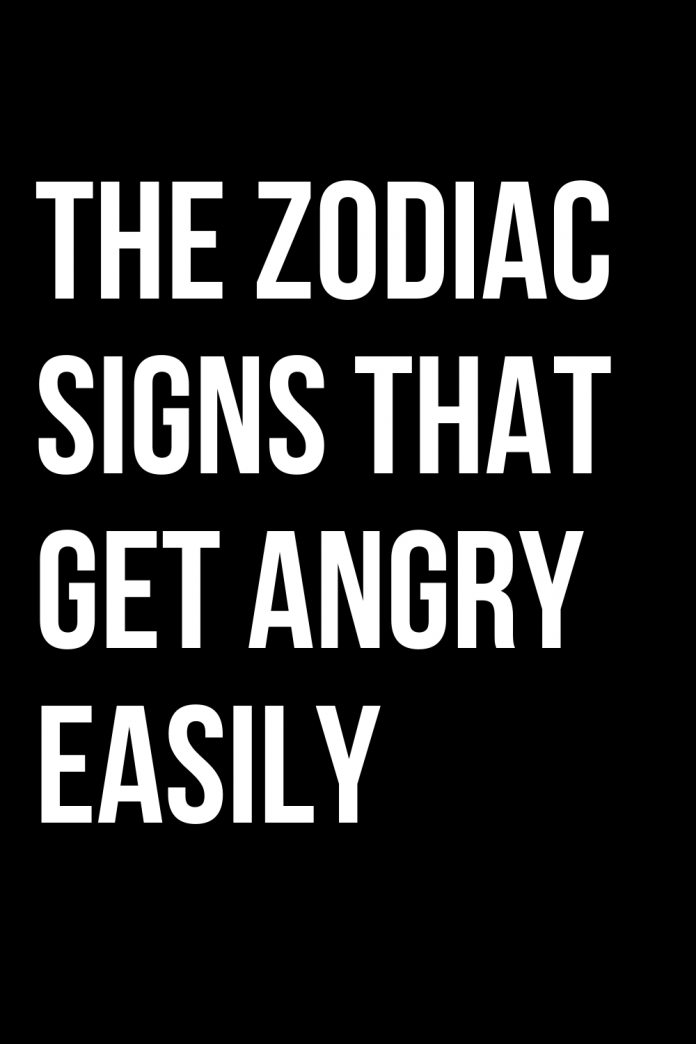 Find out which signs of the zodiac are most easily angry. The answer of the stars.

Anger is a negative feeling that sooner or later ends up overwhelming everyone. You can get angry about trivial or important things but when it happens the feeling is still unpleasant. It is a mix of different emotions such as disappointment, frustration, a sense of helplessness, and, above all, a desire for revenge and revenge. People usually feel anger at a situation that they think is unfair or because of bad behavior on the part of someone they trusted. There are, however, people who are capable of getting angry about every little thing like a falling bottle, a screaming neighbor, and the like. This depends, at least in part, on the influence the stars have on each of us.
Today, therefore, after having seen what are the strengths and weaknesses of the various zodiac signs and which are the signs that know how to console best, we will find out which are the ones that get angry the most. Since this is something that you feel deeply, it can also be useful to check the ascendant of the zodiac sign that you intend to verify.

Horoscope: the zodiac signs that get angry more easily

Aries – Enough
Those born under the sign of Aries are not famous for their patience. These are people who are often impatient and who prefer to have it immediately when they want something. This causes them to get angry very quickly, even going crazy if the reason for the anger is very strong in their opinion. Fortunately, as they light up they tend to go out and when the moment of anger is over, they manage to leave it behind so much that sometimes they don’t even remember having had their proverbial outbursts.

Taurus – Very few
Taurus natives are usually patient and always ready to wait for time to run its course to give them what they want. This mental setting makes them particularly calm and unaccustomed to the anger to which they listen only in very rare cases. When this happens, however, it is better to stay away from them because they can explode in a completely unexpected way and without forgetting who gave them a similar sensation usually completely foreign to their way of being.

Gemini – It depends
Gemini is particularly moody and this also means that their propensity to anger is fluctuating. If they are relaxed and in a good mood, they tend to tolerate any situation more easily. On bad days, however, they could also get angry about nonsense, even going crazy. When this happens they can say anything, except repent shortly afterward and become very sweet with those who believe they have unjustly attacked.

Cancer – Fast Enough
Cancer natives are quite sensitive people who always demand perfection from life. For this reason, when someone accidentally steps on their toes, they jump instantly, letting themselves go to real outbursts of anger. It is a way of doing that they put into practice very often and that at times can leave residues going to compromise relationships with those who do not know them well and do not know how to manage them. A problem of which they are perfectly aware but which, nevertheless, they are unable to remedy.

Leo – Only if it’s worth it
Those born under the sign of Leo do not like to let themselves go to anger and in life, they prefer to assume an attitude of superiority, such as to make them appear invincible. If at work or in very particular situations, they believe that what happens is beyond the limits they have imposed on themselves, then they deliberately give in to anger, also motivating the reason for their suddenly changed ways. It is an attitude that in the workplace often leads them to get what they want but that sometimes they do not know how to manage in private, risking to tread too hard and displacing the people around them.

Virgo – On various occasions
Virgo natives are people who usually indulge in pessimistic thoughts and when this happens they become more sensitive and short-tempered. In such circumstances, therefore, they find themselves taking badly every little news, letting themselves go into real fits of anger even for things that would normally make them smile. This makes them unpredictable people who can sometimes be unstable and who in these situations are therefore difficult to manage, so much so that they are kept at a distance or held in little consideration every time they repeat this attitude.

Libra – Infrequently and rarely
Those born under the sign of Libra do not like to indulge in extreme ways of doing things. In life they are therefore used to moving with extreme moderation, always thinking about everything and leaving aside emotions and moments of anger which, rather than showing to others, they prefer to keep for themselves, closing in a hedgehog and avoiding seeing people. It is a way of doing things that they implement to protect themselves from the judgments of others and to avoid saying or doing things they already know that, once calm, they could repent. Seeing them seriously angry is therefore a rare case that when it happens has certainly heavy reasons behind it.

Scorpio – When they feel bad
The natives of Scorpio do not like to show themselves in moments of vulnerability. If something touches them to the point of hurting them, however, they come to give in to anger. This usually happens when they feel threatened or hurt by people they cared about or when they think they are facing injustice. Sometimes they may snap for things that don’t even concern them but that they believe can cause pain to other people. Beware, because very often their anger is followed by a deep desire for revenge.

Sagittarius – So much
Those born under the sign of Sagittarius are people who often let themselves go to outbursts of anger, most of the time without a real reason but because of ideas that are made about people and situations. Although they are jovial and very communicative, when they get angry they tend to erect an invisible wall that ends up pushing those around them away. A way of doing which they are not very aware of and therefore are struggling to improve.

Capricorn – Average
Capricorn natives get angry when situations get out of hand or, particularly under stress, they realize they can’t handle a situation well. Usually calm, they are endowed with certain patience that when it fails leads them to let off steam, sometimes saying or doing things they regret shortly after. Nonetheless, it is a way of doing things that are liberating for them and that helps them to release the accumulated tension, allowing them to start from scratch and with a certainly more serene mood.

Aquarius – Hardly ever
Those born under the sign of Aquarius are too detached from their surroundings to easily give in to anger. Individualistic and often taken up by their things, they tend not to care much for others and if they suffer a wrong they prefer to avoid seeing who has procured it for them. Of course, in extreme cases, they can indulge in outbursts after which they limit themselves to withdrawing into themselves and behaving as if those who hurt them had never existed. Faced with life situations, however, they are more far-sighted, accepting things as they come and taking everything with philosophy, aware that if something goes wrong you can always try a new business.

Pisces – Pisces is rarely
people who like to reflect for a long time on everything that concerns them and who in doing so try in every way to avoid negative emotions such as anger. Their sensitive side, however, sometimes plays against them causing them to feel anger and frustration at the things they cannot change. In the face of a wrong they have suffered, they are also more emotional than others and this, at times, can make them give in to anger. Although most of the time, this happens in private and away from prying eyes. Seeing them angry in public, therefore, indicates that someone has crossed the line or that the situation they are experiencing is too difficult to bear.

HE IS THE ZODIAC SIGN WHO ALWAYS GETS FOOLED IN LOVE

YOU ARE NEVER SAFE – THESE ARE THE MOST INTRUSIVE ZODIAC SIGNS