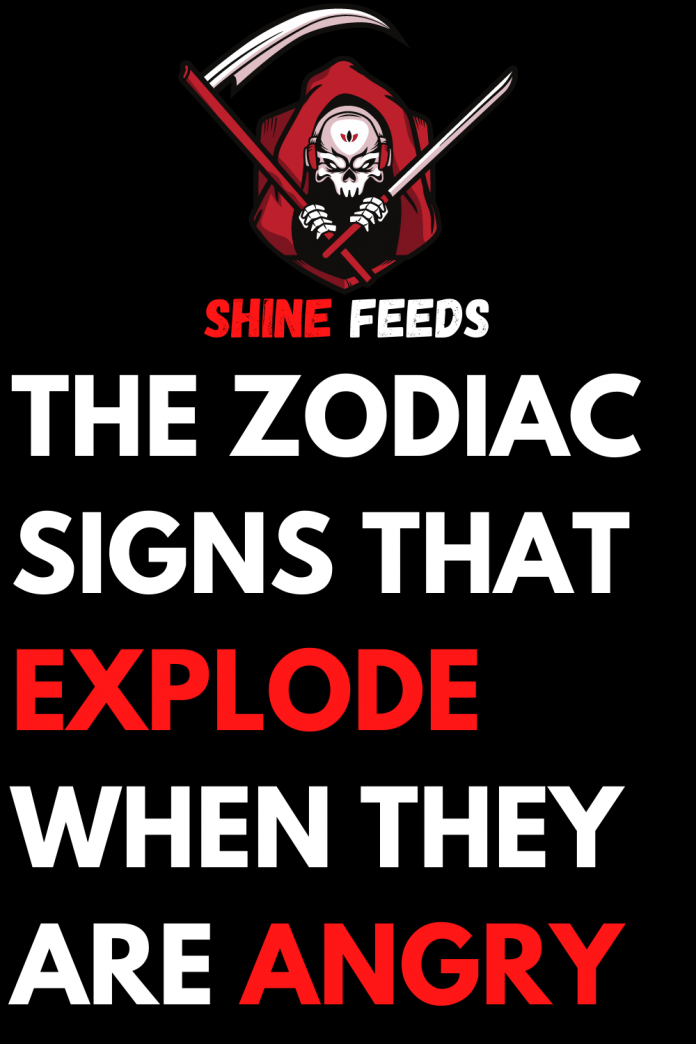 Find out which are the signs of the zodiac that explode when they get angry or are particularly nervous.

Anger, you know, is an emotion that doesn’t make anyone feel good. And the same thing can be said for nervousness. Each person is more or less able to control himself and to modulate his state to avoid problems with others. However, there are times when the anger felt is such that even the calmest ones explode.

As you can imagine, this can happen for various reasons including the way of being and the influence that the stars have on each of us. Today, therefore, we will try to understand which are the signs that explode easily and which, on the other hand, always manage to remain calm.

Aries – The ones that always explode
Let’s start with one of the most explosive signs of the zodiac. Those born under the zodiac sign of Aries are easy to emotions and when these become too many they find themselves unable to contain them anymore. For this reason, if in a bad mood or nervous, when they get angry they end up exploding and shouting at anyone in front of them. Luckily they are also quite easy to recover from any state and when that happens it is as if nothing particular has ever happened.

Taurus – Those who never explode
Taurus natives are too calm to let go. So, even when they are in a bad mood they always end up finding the right measure to contain the anger and say what they think without going into a rage. Of course, this leads them to more easily hold the muzzle and to show themselves closed towards those they consider responsible for their anger. Apart from this, however, they tend to always act calmly, showing themselves balanced and able to better manage every situation.

Gemini – Those that explode only when provoked
Those born under the sign of Gemini are quite calm by nature. And that leads them to manage moments of anger quite well. That said, if they are provoked at a time when they feel most vulnerable, they can snap on the defensive and in doing so they almost always end up exploding. This happens, however, only if they feel provoked and if the thing goes on longer than expected. Otherwise, they usually proceed calmly, letting off their anger and externalizing what they think without too many problems.

Cancer – Those who freak out
Cancer natives are notoriously touchy. They do not like to be contradicted and when something does not go as they would like they take it more than they should. Added to this is the fact that strong emotions are badly held, especially if they are negative emotions. So when something goes wrong they end up freaking outputting every little thing contained up until then in the square. An unpleasant situation that is certainly not pleasant to live in but that they usually put in place with the people with whom they are most confident.

Leo – Those who are not made to explode
Those born under the zodiac sign of Leo are not the types to explode. Rather, they drive those around them crazy. Lovers of calm and confidence in what they do, they always try not to lose their temper. Aware that only with calm will they be able to get what they want, they can therefore always be calm, even when they feel bubbling inside. Going crazy, therefore, is not in their ropes. After all, they are people who love to appear. And what better way to do it than by always looking your best?

Virgo – Those Who Go Into
The Wild Virgo natives don’t like to show everyone how they feel. This prompts them to try to suppress any negative emotion, including anger. Sometimes, however, by dint of restraining, they exceed all limits and this leads them to explode in a completely unexpected way. When this happens they tend to repent immediately. Nonetheless, if they are too tense, they cannot restrain themselves. From them, therefore, one can expect great outbursts.

Libra – Those who never explode
If there is one thing that does not belong in any way to those born under the zodiac sign of Libra, it is exploding in anger. Their way of being relaxed and calm is in fact so part of their character that it always pushes them towards an inner calm that is difficult to imagine. Even when they get angry, the natives of the sign are therefore able to moderate themselves and limit themselves to stinging phrases or words that can hurt. All without ever exploding. It wouldn’t be elegant at all.

Scorpio – Those who rarely explode
The natives of Scorpio are very sharp people and able to tame their feelings. This makes them easy for strong emotions which they nevertheless almost always know how to maintain. But now and then, when they build up too much tension, they too can explode. That said, as long as they can, they will try to just hit without getting noticed too much. Using harsh, cutting words or enacting revenge that can release at least some of the stress on them.

Sagittarius – Those who explode occasionally
Those born under the sign of Sagittarius do not usually explode because as long as they can they prefer to live life lightly. If they are faced with situations that are bigger than themselves, they can let themselves go to a few too many outbursts. It is something of their way of being that they dislike and therefore will always try to hide from the world. Once discovered they will no longer limit themselves by giving their worst. Better get ready.

Capricorn – Those who never explode
Capricorn natives never explode in anger. They tend to tell each other a different reality and when the situation becomes too pungent they end up crying for the frustration that in some ways is their way of perceiving anger. It is therefore very difficult to see them angry. Even provoking them their strongest reaction will be that of showing themselves piqued, putting the muzzle, and starting to coldly treat anyone in front of them.

Aquarius – Those who explode unexpectedly
Those born under the Aquarius zodiac sign are usually so calm that they don’t seem like people who can explode in anger at all. Yet when they feel that the measure is full, they too can freak out. And when this happens they give the worst of themselves, showing themselves cold and resentful and becoming vengeful in their way. Dealing with them is not at all pleasant as it is not having to discuss what made them upset. In some cases, when you can, it is better to distance yourself

Pisces – Those who never explode
The natives of Pisces are one of the most resilient signs of the zodiac. If you add to that they’re being calm by nature, it’s easy to imagine how far anger is from them. Of course, even natives of the sign can feel nervous or irritated from time to time. Nevertheless, they always manage to contain themselves, saying what they feel without going crazy. All in such a clear and logical way that they get more results than they would get by exploding.

June 28, 2022
The Shine Feeds is your news, entertainment, music fashion website. We provide you with the latest breaking news and videos straight from the entertainment industry. Fashion fades, only style remains the same. Fashion never stops. There are always projects, opportunities. Clothes mean nothing until someone lives in them.
© © Copyright © 2021-shinefeeds.com. All rights reserved