Find out which are the signs of the zodiac that they never forget. And who remember both the wrongs suffered and the kind gestures towards them.

Based on quiet living and relationships in general, there is an aspect that very often we do not care about and that is the ability with which others remember things. Some people tend to overlook everything, taking things superficially and forgetting what they are told or done. On the contrary, others have a good memory or who, more simply, do not forget what those around them say or do.

These are people who even after years keep in mind the past with those they attend and who behave according to these. For this reason, it can be very useful to know how to recognize them. Because if there is one thing for sure it is that among the aspects that lead to this way of being there is precisely the influence of the stars. So let’s find out which are the zodiac signs that do not forget and which, instead, have what is called short memory.

Aries – Those who forget quickly enough
Those born under the astrological sign of Aries are among the signs that forget things fairly quickly. Used to living in the moment, they end up reacting instantly to what is done or said to them. And this pushes them to forget about it. Even when they suffer an affront they usually get angry immediately and then let it go and forget about it. Which they also do for beautiful things, risking to appear as little grateful to those who have done them more than a favor. Their way of being, however, really prevents them from dwelling on what has been. For them, everything must be lived in the present and if there is one thing they will never do, it is precisely concentrating on what can no longer be changed.

Taurus – Those Don’t Forget the Important Things
The natives of the Taurus zodiac sign have a selective approach to what should be remembered or forgotten. While not paying particular attention to everything that happens around them, they always try to remember what is being done for them. At the same time, if they suffer a wrong they do not forget it, waiting for the moment when the memory of what happened will be useful to them. While they are always calm and kind, they are people who can feel resentment. And when that happens they can become intractable. At the same time, they always know how to show their gratitude to those who have taken care of them in some way. In short, they are pretty good at never leaving out the important things. And this regardless of their nature.

Gemini – Those who forget a spot
Those born under the zodiac sign of Gemini are, as often happens, very difficult to define. If we talk about experiences, they tend to metabolize them according to their times which, needless to say, are quite variable. When something does not go as they would like and they suffer a return, for example, they can react immediately or close in on themselves to explode at a later time. Their propensity to remember or forget what is said and done depends on this way of doing. The same happens also for what is positive. The natives of the sign can also experience beautiful things differently. It all depends on the mood they have at the moment. They are therefore people from whom practically anything can be expected.

Cancer – Those who pretend to forget the unpleasant things
The natives of the astrological sign of Cancer like to make people think that they are the types to forget things. While they like to remember the good times or the pleasant actions that have been done towards them, on the other hand, they seem to want to put aside all that is negative. But be careful, because, in reality, they don’t usually forget about it. If they feel they have been wronged by someone (even if they are wrong), they will then have a closed attitude. And all without giving explanations about it. For this reason, dealing with them is simply impossible. While trying to appear indifferent and superior in their way, the natives of the sign are the people who, as the saying goes, “they tie it to their finger”, and all without ever admitting it.

Leo – Those who don’t just forget what interests them
Those born under the zodiac sign of Leo are always very careful about how others behave with them. Nonetheless, they try not to pay too much attention to attitudes they know they can overlook. Taken as they are from their life and, above all, from themselves, they do not have enough time to devote to others. That said, there are things that they tend not to forget and that usually coincide with real confrontations towards them or with attitudes they do not tolerate. Faced with these things they can pretend nothing has happened but continue to remember even forever. On the contrary, they have a habit of forgetting a little too easily what is good for them. Perhaps because they believe they deserve all forms of positive attention.

Virgo – Those who do not forget
The natives of the zodiac sign of Virgo have an analytical mind which is associated with an iron memory. This becomes even more iron when there are others and the way they behave with them. Whether it’s good or bad deeds, the natives of the sign always remember everything, keeping it alive in their minds. Unfortunately, this way of doing things sometimes ends up taking over. Regarding unpleasant things, for example, those born of Virgo are capable of feeling a grudge even after years. One aspect that can make their life less relaxed than it could be if they learned to let things go. Fortunately, the memory of the positive things comes back to balance things a bit now and then. Just a shame that this doesn’t happen a little more often.

Libra – Those who do not forget but let go
Those born under the zodiac sign of Libra have a good memory. For this reason, they can remember events, people, and facts that anyone else ends up forgetting. This ability also extends to gestures and actions they were intended for. Thus, even if their balanced way of thinking almost always leads them to let flow and abandon emotions associated with past events, the memory makes different turns. Even years later they find themselves remembering entire conversations and what good or bad was said and done for them. An aspect that comes in handy in evaluating those around them but who limit themselves to doing just for this.

Scorpio – Those who never forget
It can be said that the natives of the zodiac sign of Scorpio are those who most of all never forget. Extremely linked to the emotions they feel, they remember every single word received. At the same time, they do not forget the actions towards them either. This happens both positively and negatively. The natives of the sign end up feeling affection and gratitude towards those who have been kind to them even for several years. At the same time, they don’t forget who made them sick. And this memory is very useful to them because of their being extremely vindictive. In short, those who deal with them should always avoid treating them badly or making them ill. Because sooner or later, they will always manage to take revenge, especially thanks to their infallible memory.

Sagittarius – Those who do not forget the things that bother them
Those born under the zodiac sign of Sagittarius have a habit of easily forgetting what is done for them, except to perfectly remember every smallest gesture that, in their opinion, turns out to be wrong. This often leads them to be upset with the people around them and who they say they consider friends. A detail that almost always leads them to moments of tension that, however, could be avoided if only they learned to put things on the scales before closing themselves off in an offended attitude. A way of doing that the natives of the sign do not seem to want to change, even if the risk is to lose important people for real nonsense.

Capricorn – Those who do not forget but pretend
The natives of the astrological sign of Capricorn always try to have peaceful and relaxed relationships with the people around them. For this reason, they always try to overlook what bothers them. Nevertheless, however, they never forget and this even if they are often ready to swear otherwise. It must be said, however, that they manage to remember what good they have received and this helps them to weigh the pros and cons of those around them, leading them to make choices that are almost always prudent and in line with their needs. An aspect of which they are aware to the point of bragging, while still lying about the negative aspects. For some strange reason, they always try to hide them even from themselves, pulling them out only if cornered.

Aquarius – Those who do not care
Those born under the astrological sign of Aquariusthey have a rather incomprehensible attitude when it comes to what they remember or not about how they are treated by others. They tend to ignore what others do, resulting in being completely indifferent to any attitude, both positive and negative. Even if now and then they can remedy this attitude by blaming those who do them even a small wrong, they are not among those who do not forget. More focused on their present, they end up letting go of what happened in the past, certain that every new day should be lived as such and therefore with a whole new spirit. Which they expect others to do with them too, and they get angry when they don’t.

Pisces – Those who do not forget but do not make it weigh
The natives of the zodiac sign of Pisces are among the signs of the zodiac that they never forget. They can remember pleasant gestures received even years before. The same applies to everything negative. The natives of the sign can remember even single sentences received sometime before. Nonetheless, they always try not to make the matter weigh on those around them, making an effort to treat others for their present actions. Certainly, however, their infallible memory is always ready to remind them of what it was. Which is best to always keep in mind. If they have been wronged they will hardly trust again. And this even if from their way of doing they will try in every way not to point it out. 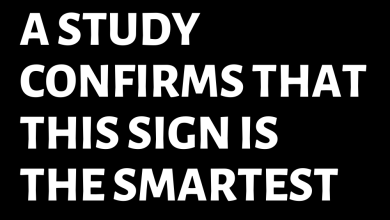 A STUDY CONFIRMS THAT THIS SIGN IS THE SMARTEST OF ALL

10 Things You Need To Know If You Love An Aries

12 astrological couples: 6 who will last for life and 6 who will separate