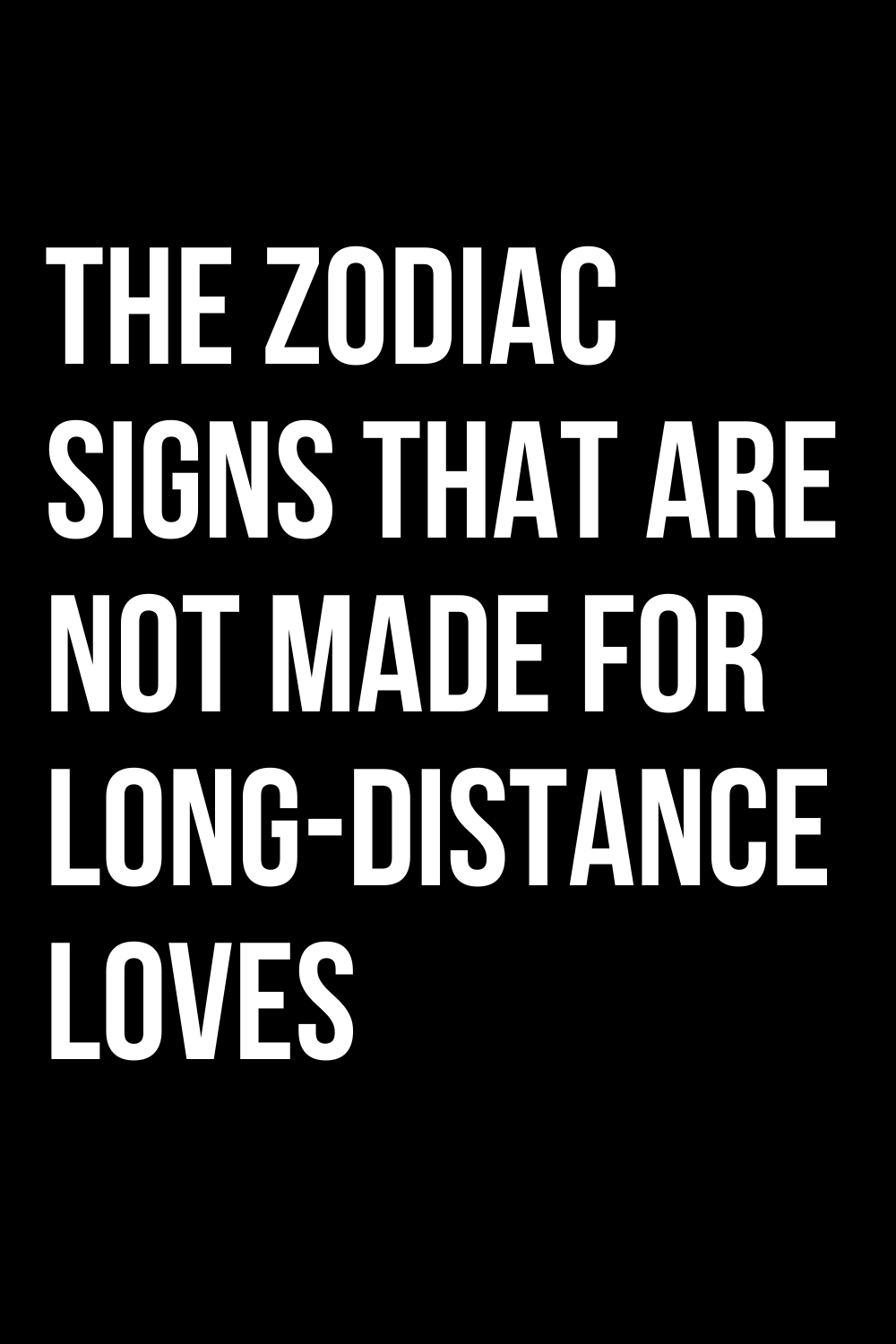 THE ZODIAC SIGNS THAT ARE NOT MADE FOR LONG-DISTANCE LOVES

Horoscope: The zodiac signs who do not live long-distance love stories well and those who, on the other hand, do very well.

Summer has always been known as the season of light loves, those that are born with lightheartedness and that often end together with the holidays, leaving a pleasant memory and some broken hearts. It is also the season of new loves which, once the first steps have been passed, continue in a crescendo of feelings such as to make us want only to stay together, even after the holidays are over. But what if we met on vacation and reality sees lovers living in different cities? The only solution is to start a long-distance relationship, a situation that is not exactly good for everyone and that some signs seem to be living rather badly. Since this aspect may also depend on the influence that the stars have on us, today after having seen what they are the zodiac signs that need changes and which signs of the zodiac are the most mysterious, we will find out which signs are not made for long-distance stories and which ones, instead, live very well.

Aries – Not at all made for long-distance stories
Those born under the sign of Aries usually live summer loves, destined to remain within the confines of the holidays. For them, a long-distance relationship is something inconceivable and capable of destabilizing them like a few other things. While they find the idea of ​​such a relationship romantic, their need for physicality, therefore, makes them decidedly unsuitable for such a relationship that they basically would not know how to manage and that would most likely lead them to betray or look around in search of someone for them. closer. If in love, nothing excludes that they can try. But unless it’s something transitory they don’t seem destined to make such a relationship last.

Taurus – Able Enough To Hold Long Distance Love
When laid on stable bricks and centered around a routine of their liking, Taurus natives may think they are experiencing a long-distance relationship. There being poised and acting without haste makes them quite suitable for a distant love and to be met only from time to time. For things to work, however, it is necessary that everything is studied to perfection and that love is combined with a whole series of small habits capable of making them feel safe and making them weigh as little as possible the distance that is never pleasant. Especially for those who love comfort so much.

Gemini – Not exactly made for long-distance stories
Those born under the sign of Gemini have a personality that is so difficult to understand that it makes them unpredictable on multiple fronts. One of these is related to the management of a long-distance story. When they feel involved they seem ready for anything but in making decisions they end up too often not considering their way of being. This means that they often encounter misunderstandings that lived at a distance can also lead to the end of a love story. For this reason, they are not among the signs made to live a distant love unless you have the opportunity to move constantly to make everything easier. Even in this case, however, their unpredictability risks making everything difficult anyway.

Cancer – Not Made for Long Distance Stories
Cancer natives are in love with love itself and need constant attention and the constant presence of the people they love. For this reason, when they decide to live a long-distance story they already do it as an experiment, aware that they have too many needs compared to what they can hope for from a relationship of this type. We can therefore say of them that they are not inclined to have long-distance stories and that even if they try, they risk shattering everything at the first quarrel and all because their need for the presence of the partner leads them to react on impulse and to feel alone more often than not. how much they would not want. A problem whose only solution seems to be being able to live at least close enough to be able to find each other several times a week.

Leo – Not very convinced by relationships with distant loves
. The natives of the sign are not very convinced by the dynamics that are established with a distant relationship and linked as they are to the need to see everything that concerns them grow and evolve, they end up placing themselves in a closed way towards this type of relationship. Of course, if they are really in love they can think of turning a blind eye but only if they believe there is room for being able to get close in a short time. Otherwise, most likely, they wouldn’t even try.

Virgo – Not made for long-distance stories
Virgo natives do not like long-distance stories because rational as they are, they know they need certain stimuli that with whole kilometers to divide them from the loved one they would not be able to have. For this reason, when it comes to relationships, they are the first to put a stop to this possibility, aware of not being able to hold it for a long time and eager to live any love stories carefreely. In the case of summer stories, therefore, the most they can do is to maintain a friendship relationship to be reviewed at the next meeting, probably to limit themselves to a story that lasts a few months a year but without the possibility of becoming something more.

Libra – Able to think about the possibility of living a distant love
Those born under the sign of Libra have a very great idea of ​​feelings and love. For this reason, they are not used to setting themselves stakes, and if they feel something important towards someone they are willing to do everything to ensure that there is a way their love is fulfilled. When it comes to long-distance relationships, therefore, they are always proactive but at the same time determined to study the situation to understand whether or not it is suitable for them and what they want. The feasibility of the thing, therefore, depends on the degree of involvement and on what is done on the other side and on a whole series of constantly evolving factors that only they can understand and manage before making the final decision.

Scorpio – Willing to think about it but not entirely convinced
The natives of Scorpio do not like the idea of ​​living a long-distance relationship. For them, sharing the important moments is something extremely important that can hardly be replaced by video calls. Nonetheless, they are also unwilling to lose a loved one due to a lack that could even be worked on overtime. For this reason, if involved, they are ready to dive in and try, obviously leaving the benefit of the doubt but giving it all so they don’t have to have regrets by rethinking what they gave up in order not to try.

Sagittarius – Suitable for short-term long-distance stories
Those born under the sign of Sagittarius need their own space and mental freedom that is often difficult to explain but that finds good ground in a long-distance relationship. Even so, their need to have it all soon leads them to want more, making them weary enough to retrace their steps. For this reason, although they are not at all opposed to the idea of ​​living a long-distance relationship, they can only manage it if limited in time and with promises of a future together. If things do not have the right conditions, they prefer to let it go and focus on something that is within their reach.

Capricorn – Uncertain about the possibility of loving even at a distance
The natives of Capricorn love to profess open ideas and when they start a summer story they say they are determined to carry it on even if from different cities. When they are at their best, however, fears assail them leading them to reflect on what is best for them. This does not mean that they are against it but that often their choice is the result of instinct because even after much reasoning, they rarely manage to make a decision that can be defined as such. As for success, in their case, a lot depends on the partner and his ability to make needs and times coincide with theirs. Taken by so many commitments they could appear emotionally distant, which combined with the physical distance, would not help the relationship.

Aquarius – Little enticed by long-distance relationships
Those born under the sign of Aquarius do not have a great desire to bang each other, especially when it comes to relationships. However, a long-distance story has a certain charm for them, representing a type of relationship in which they can count on their privacy and on the maintenance of personal spaces, which is very important to them. For this reason, if we do not talk about great distances, they can come to think about it, unless they decide only after having experienced the thing for some time. We can therefore say about them that even if they do not like the idea, they are not completely closed to the thought of trying it.

Pisces – Willing even to a very distant love if they are involved
The natives of Pisces do not stop at anything and if they think it is worth it they are also willing to live a long-distance relationship. For them, what matters is to find the right person, aware that they can live a wonderful love even if they are divided by distance. Romantic and able to make a resource out of every obstacle, they are always ready to get involved and win. If there is love, then, for them there is everything and this regardless of the home address.