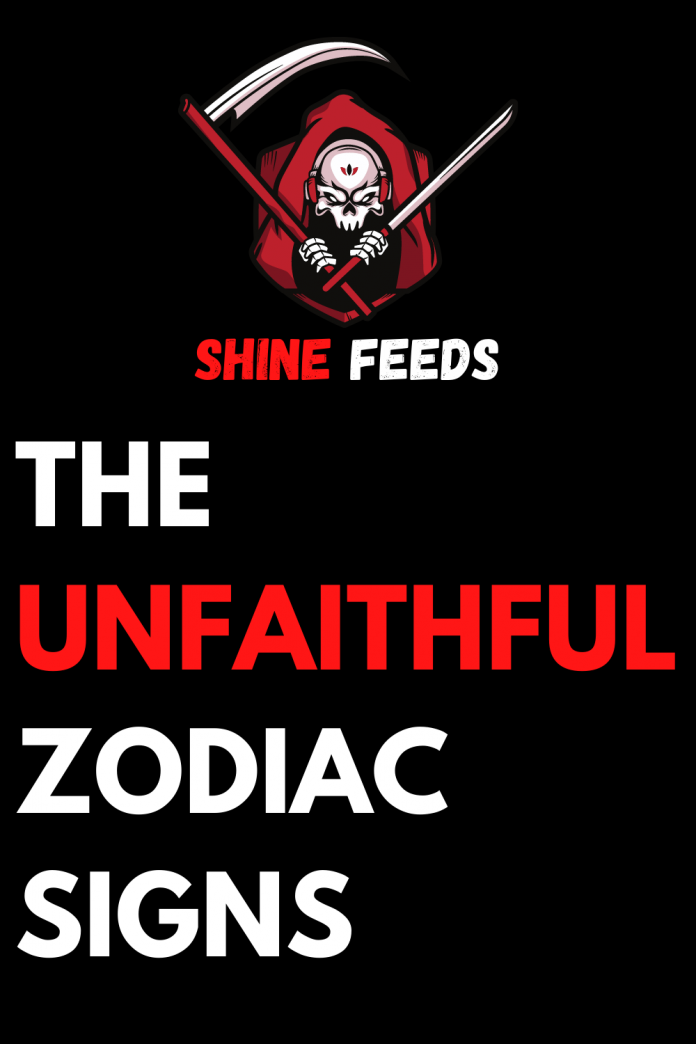 Find out which are the most unfaithful zodiac signs and how they act. The answer of the stars is signed by sign.

When you love someone and choose to start a romantic relationship, one of the biggest fears is that of being betrayed. Unfortunately, this is a possibility that should never be underestimated and that in some cases can even be foreseen. Being unfaithful presupposes a way of being and living relationships that can be easily identified.

And speaking of stars, your partner’s zodiac sign can also tell a lot about the subject. And this although there are always exceptions given by love, by the ascendant, or by a way of being that in some cases can be above the stars. Wanting to base ourselves on a general vision and quite truthful at least for most people, here are the most unfaithful zodiac signs of the zodiac.

The unfaithful zodiac signs and those who are not at all

Aries – Those very often unfaithful
Those born under the Aries zodiac sign tend to be quite unfaithful. This depends on their thirst for conquests which, of course, tends to tire them out when they have already achieved what they desire. These are people who, while loving, need a certain dose of adrenaline. So when this is no longer possible with the story they are experiencing, they end up looking elsewhere. A situation that sooner or later also leads them to conclude the story. It is difficult for them to decide to pursue something that no longer satisfies them as they once did. To understand if they are unfaithful or not, it is sufficient to grasp those implicit messages that can be the minor presence, the lack of effusions, the emotional distance, and many other small details that all together make the difference.

Taurus – Those who sometimes succumb to infidelity
Although the natives of the astrological sign of Taurus are extremely romantic people, in some situations they can make mistakes. Thus, within a story that no longer works for some time or after a period of severe crisis, they can go so far as to give up and betray. In general, when this happens they are always taken by so many feelings of guilt that push them to behave in an exemplary way. Which constitutes some proof of the fact that they are fraudulent. Fortunately, most of them don’t tend to cheat often. But when this happens you can understand it from their way of changing. Which is almost always abrupt and sudden and therefore able to make people understand the wrong that has occurred.

Gemini – Those who sometimes cheat but mostly leave
Dealing with those born under the sign of Gemini is not always easy. They are self-centered people, often humoral and able to get tired of something shortly after starting it. In relationships, they are therefore rather unstable and often led to look around in search of novelty. If they find themselves in the middle of a relationship that they consider poor in emotion, their first reaction is therefore to turn their attention elsewhere. When this happens they may come to betray and that in doing so they do not even feel guilty. Most of the time, however, they are likely to put an end to the story, reserving the option not to give any explanation about it. In case of betrayal, however,

Cancer – The rather loyal ones
The natives of the astrological sign of Cancer are people who believe a lot in love. When they find the right person, then, they intend to make the story last as long as possible. Being people who like to focus on one thing at a time, they don’t tend to think about making other fuss. And for this reason, they are usually more than faithful. Of course, like humans, they too can make mistakes from time to time. And if they do it mostly happens when they are angry. In this case, it is likely that to feel better they decide to seek revenge. However, these are truly sporadic cases and after which they are assailed by feelings of guilt. Being betrayed by them, therefore, means seeing them change their attitude and become more caring than ever. And, insisting on pressing in the right places, most of the time it is even possible to get a confession. What they would do to lighten their conscience and for which, needless to say, they would expect forgiveness.

Leo – Those who are generally loyal
Those born under the zodiac sign of Leo are so into themselves that when they find the person they think is right, they want to make the story work at its best. In this way, they can focus their attention on other aspects that are very important to them. Having said that, as they love to always be the center of attention, they are quite sensitive to the flattery of others. And their way of doing it can lead others to grasp an availability that is instead only on paper. Beyond appearances, they are still quite faithful signs, although they need certain freedom of action without which they would feel suffocated. Those who are with them can therefore feel calm at least as long as they can offer them the right attention. Without these, in fact,

Virgo – Mostly Loyal Ones
Although singles are quite prone to look around and have different experiences, Virgo natives, when they meet the right person, turn out to be quite loyal. Their intent is in fact to build a relationship that knows how to be stable and lasting. In this way, they can feel safe and calm and concentrate as right on everything else. Of course, sometimes, this way of doing things leads them to get a little boring and push the partner to need more attention. When it comes to infidelity, however, one can be quite calm. And what if you’ve recently been together? Usually, when they cheat, the natives of the sign do not bother to create alibis, which is why it is rather easy to understand what they are up to.

Libra – The faithful ones Those
born under the zodiac sign of Libra are quite faithful. As demanding as few when it comes to choosing a partner, they are so thorough that they don’t want to change them very soon. And since they don’t usually focus on more than one person at a time, being unfaithful isn’t their way of being. If they don’t feel valued or loved enough as they would like, however, they may decide to end the story. And when that happens, they usually don’t mince words, stating their intentions and then disappearing without caring what the other person thinks. However, their detachment is generally clear and progressive. And for this reason, it is quite easy to realize and act in time.

Scorpio – Those who love themselves are very loyal
The natives of the zodiac sign of Scorpio are often difficult to pin down. And this occurs above all in love. Known for being unfaithful people, they are a lot more romantic than you think. If they love someone, then, they will aim to be more than faithful and to offer them everything they can. Their vengeful nature, however, makes them people who can often act out of anger. It can therefore happen that after a fight they end up betraying with the sole aim of hurting the other person. The same thing can happen when they don’t feel particularly involved. It must be said, however, that the natives of the sign never hide. For this reason, it is quite easy to understand if and to what extent they are involved. And consequently, it can be understood without too much trouble whether or not one should fear their infidelity.

Sagittarius – Those who are often unfaithful
Those born under the zodiac sign of Sagittarius are among the signs for which it is always good to be on the alert. Even if they are in love they have such a need for freedom that they are not at all exempt from possible infidelity. If as a single you don’t mind seeing more people at a time when they’re with someone they try to contain themselves. But sometimes the temptation may be stronger. And when that happens they don’t usually have great remorse. Especially if they believe that the other side is trying to cage them. Dealing with them from this point of view is therefore difficult, if not impossible. Fortunately, they are quite simple to discover. Their attitude will tend to change, becoming more detached. Also if they are taken by someone else, they can hardly hide it.

Capricorn – Those who rarely cheat
Natives of the astrological sign of Capricorn like to feel courted. When it comes to betrayal, however, they are not attracted to it. Among the thousands of commitments they have, they do not feel the need to get involved in other relationships, preferring to invest the little energy they have left in a story that is always the same. With them, therefore, you can be quite calm. And on the few occasions when they might go so far as to cheat, they can be recognized early on because of their sudden change of attitude. Something that the natives of the sign tend to do without realizing it. But that is precisely why it is easily recognizable by others.

Aquarius – Those who sometimes betray and sometimes don’t
From a relational point of view, those born under the Aquarius zodiac sign are unpredictable. They tend to behave variably and are usually linked to the mood of the moment. There being quite inclined to live withdrawn leads them not to be real traitors. If they find a person who can grab their attention, however, things can change dramatically. Generally, however, when they have their heads elsewhere it is easy to understand because they do not bother to hide it in the least, resulting in even cold and detached.
An aspect that even making them notice they will always and in any case deny but that nevertheless is really easy to recognize.

Pisces – Those who practically never cheat
Those born under the zodiac sign of Pisces are among the signs that betray the least. Romantics like few tend to establish such a unique relationship with their partner that betrayal is completely excluded. Being with them, therefore, means being able to be more than calm under the aspect of fidelity. Which they also expect from the partner they are with. Since there are always exceptions in life, however, you can never say. The very rare times in which this should occur, however, their way of acting would change to the point of immediately making it clear what happened. And this, of course, will allow the partner to understand what is happening and if it is appropriate to remedy it by talking about it face to face. The natives of the sign, among other things, are indeed sincere. It is therefore possible that in case of betrayal they admit everything.