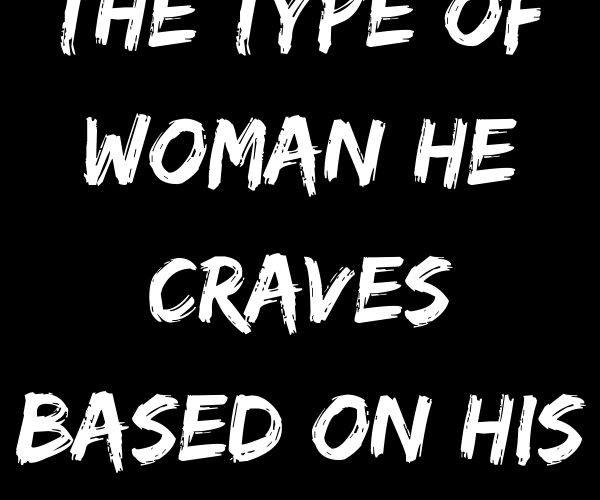 The Type Of Woman He Craves Based On His Zodiac Sign

He craves a woman who shares his sense of adventure and is not afraid to get a bit messy while doing something outdoorsy.

He wants a woman he can spend a Sunday night chilling in front of TV an grabbing couple of beers, not the one who is complaining because he doesn’t take her to fancy restaurants.

He wants a woman who won’t tolerate anybody’s b.s., not even his. Being sassy is something that will immediately catch his eye.

He craves loyalty above all other things. Betrayed trust is something a Taurus will never forgive.

That’s why he craves a woman who makes him feel safe, one that doesn’t play games and strings him along.

When physical appearances are concerned, he craves sweetness. He is intoxicated by a woman’s feminine traits and a smart mind.

A woman of her word who knows what she wants and is comfortable in her own skin is more than a Taurian can ask for.

All a Gemini man craves is to be challenged and not just in bed. He will be drawn to a woman who can match his intellect and make him come out of his comfort zone.

A Gemini man is saphiophile and he can’t resist a woman he can have a deep conversation with but also shared a sense of humor.

Also, for him, the conversation is a form of a foreplay. He will get turned on just by listening to a woman he is into. Smart is the new s*xy in the eyes of a Gemini man.

He is probably the neediest of all the men of the zodiac and every now and then he needs to be reassured that a woman’s feelings toward him are genuine.

He is always the one who goes above and beyond to make a woman happy but it once backfired on him and that’s where his insecurities come from.

He loves to feel needed that’s why he finds himself drawn to women who have troubled pasts. He will do his best to make her feel safe in his arms.

Damsel in distress is the type of a woman a Cancerian craves the most.

Who other would a king crave than his queen? Leo will definitely go for someone he considers his equal. He can’t resist confident, strong and passionate women.

Physical appearances matter to Leo more than to any other male zodiac sign. He wants a woman who is drop-dead gorgeous, classy and elegant.

Deep down he knows it’s superficial but he can’t help the way he is. He wants the best for himself and he wants to have it all in one woman, inner and outer beauty included.

Unlike Leo, a Virgo man is more attracted to inner beauty and overall intelligence. Someone he can see eye to eye with is what makes a Virgo incredibly happy.

He likes to keep things simple that’s why he doesn’t like women who make mountains out of a molehill and create unnecessary drama.

Basically, he craves a woman who gets him, a woman he can be best friends with too. Sadly that woman is usually right under his nose and he is totally clueless about it.

A Libra man craves to be acknowledged and admired. A woman who thinks highly of him and is not afraid to say so is what he is after his whole life.

He loves receiving compliments even though he’ll never fish for them because he wants to know that they are heartfelt.

Being well liked among friends and having a close family relationship is what’s important for a Libra.

That’s why he craves a woman who shares his beliefs and wants to create with him a tight-knit social group.

There is no surprise and no doubt about it a Scorpio man needs a sensual, passionate woman. He wants her passion to go beyond the bedroom.

He likes fierce and independent women who carry the scent of mystery he can relate to. He is looking at a relationship as a bond between two equals, which is why neediness doesn’t sit well with him.

Above all else, he wants someone who is his kind of crazy. A woman who is comfortable in her skin and not afraid to be herself.

A woman who shares his sense of humor is all a Sagg craves. He believes that if he can relate in that area with a woman, he can relate with her anywhere.

Essentially he needs someone who gets him. Someone who is an optimist like him and doesn’t take life too seriously.

Someone who won’t get upset if he pulls some silly prank.

He wants someone he can enjoy life with but also someone who will be there when life gets hard.

It may sound a bit unusual but what a Capricorn craves the most is an old-fashioned woman.

A woman who believes that a man needs to take the lead and knock her of off her feet.

He usually takes his time in getting to know someone because he wants to make sure they are compatible.

He wants someone who is hardworking and driven like he is but someone who, unlike him, knows when it’s time to relax, too.

He craves a woman with a gypsy soul . Someone who is not bowed down with societal norms and can think for herself.

He values uniqueness, open-mindedness and intelligence in a woman.

He wants a woman who awakens his mind and asks him questions he didn’t expect.

It’s easy for him to get into philosophical debates regardless of the topic because he knows a little bit about everything.

He also likes to have fun and joke around so he doesn’t go well with women who don’t understand his sense of humor.

He craves a creative and artistic woman. Someone who won’t hold his constant need to daydream against him.

His past relationship often ended because he got accused of living in the la la land.

He needs a girl who can really understand him and his sensitive nature, that’s the only way he will be happily coupled up.

The best match for a Pisces man would be a modern-day hippie spirit woman .

She is a great listener, artsy, spontaneous and she will be an inspiration for him to dream bigger as well as a wake-up call when he needs one.